I have finally finished the Fellowship of the Ring shawl.  I haven't blocked it yet as I'm not really sure I like it.  Perhaps the colours don't suit my idea of LOTR colour, perhaps it's the fact that it is a pi shawl. Or half a pi shawl.    Now I made a large pi shawl, fully circular, several years and and I like that,  However the lace and the shaping increases don't seem to work.  It makes the edges bumpy and I doubt that blocking will fix it.  I think it needs more stocking stitch between each set of lacy stitches.  So it's sitting there while I consider its fate.  I think I shall probably rip it out.  I'm just not satisfied with it.

The family has been very disturbed as one son was sacked, totally without warning.  He managed several offices placing disabled people in work.  He had a supportive boss, a great team, all doing well.  They had several audits passed with flying colours and two more to take.  He was called to head office and asked for his car keys and phone and told not to return to his office.  This was a bolt from the blue and they were on the point of buying another house as theirs is now far too small for them.  He went to see his boss who was as devastated as he was and who knew nothing of it at all.  He's doing some temp work and applying everyday for stuff.   He feels the not for profit field is where he works well, although he could earn a lot more in a private enterprise of the public service. 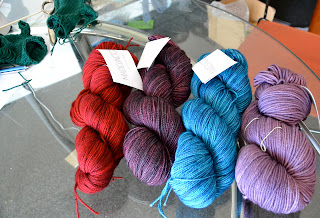 So I did some comfort shopping.  This is Madeleine Tosh sock yarn from Suzy Hausfrau in Canberra.  I ordered it late last Friday evening, just before I went to bed.  It was in my hands at about 1:00pm today, Monday.  Pretty good?  I think so.

From the left is superwash merino sock weight in tart, oxblood and baltic.  Far right is briar in worsted weight which will, I think, be a beret.

The green messy knitting top left is a pair of fingerless gloves awaiting ends being sewn in.  Made from  Bendigo Melody, merino, cashmere and microfibre.  From stash.

An apology is offered if you left a comment and I didn't respond.  I could see there were comments but could not actually see what they were.  This lasted about a week but seems to now be fixed.
Posted by Jan at 2:46 pm

I'm so sorry to hear of your son's sacking. It sounds like they suspect him of something. That's how people were forced out from the last private company I worked for. Even the day I left, I was taken out to lunch by the CEO, hugged and thanked for my contribution, driven back to the office by the manager, supervised while I cleared out my desk and walked to the front door! But I had given notice two months beforehand so could have taken anything in that time if I had been so inclined. It's not a nice feeling to be pushed out like that and I'm sure for your son it was even worse!

I'm also sorry to read that you are not happy with your FotR shawl . Good thing yarn can always be re-used.

How terrible for your son getting sacked like that. I remember that happening to me about 20 yrs ago now, no goodbyes just pack your desk up and go. My boss didnt know anything of it either, and the head people just said that the last people who started new positions were the first to go which was very sneaky. I hope he finds a job that he loves very soon. I think the shopping yarn is beautiful and it makes me happy just looking at it!

Thats so awesful,I hope he finds something fast! For the past three years I have had the feeling that my Line manager would like me gone but working in the Gov as I do,it three warning and the written before anythimng happens,the unpleasantness has me constantly on eadge and heading for depression which I hope your son doesnt do,I want to go into the mining industry (better money) but today the economists are saying the boom will be over soon,do i risk leaving a permanent Gov job for one that may evaporate in a few years..heres best wishes to you and yours,PS that woool looks divine!!

Now I understand your emails!! That seems very unfair and unwarranted behaviour by the workplace. I am sure your son will find new employment, but it must be a worrying time for him and his family- you included.
I hope your shawl is resolved soon, either way.
Such pretty sock wool!! I clicked through too.

"The family has been very disturbed as one son was sacked, totally without warning. He managed several offices placing disabled people in work. He had a supportive boss, a great team, all doing well. " This is nice.