It's been a busy week, slowed down by doing something to my hip which has made arthritis flare there.  I've finally given in and bought some Voltaren Rapid which I can take for about three days.  It usually does the trick and it's probably six or eight years since I used it.  Nasty stuff on the stomach and I always make sure I take it with food..  For the last two nights I've slept, well rugged up, on a comfortable chair which gave me the right posture for pain to ease.  Being flat in bed made the pain worse.

This photo was taken yesterday.  I live on one of the major arteries in and out of Sydney.  The truck broke down as it tried to enter the service station.  That was about 10:30 am.  It was there for hours.  Part of the second  truck in the B-double jutted into the road.  Small cars could get past it, as a small car could get past it into the parking area here.  It stayed put for hours and then in the afternoon a couple of men started work on it.  They got it moving about 5:00pm.  Any later would have caused a really major peak hour snarl. 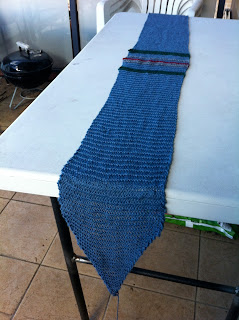 I finished the scarf for eldest grandchild to take to the snow in ten days.  The stripe is not centred but the second ball of the Garn Semilla organic wool was not as long as the first.  It's very soft and should be comfortable to wear.  There's more hanging over the far end of the table and there are ends to be sewn in.

I've also started a hat for him.  He is not keen on such things and usually goes fairly lightly dressed to school even on cold days.  He's not worried by it.  His dad  tells him being out in the snow all day is not the same as a quick trip to school in the cold.  I suggested he gets a couple of the older boys whom Andrew admires to casually remind him to pack hat and scarf.  It might work.

His dad is still looking for a job.  He was offered one with another not for profit organisation but has decided against taking it.  He could certainly do it but is really well over qualified for it.  I think that in a few months he would be bored stiff.  It may seem strange they are going for five days to the snow as he doesn't have a job.  However this was all completely paid for several months ago.

It was Education Week in NSW last year.  I never enjoyed this as either a student or teacher.  I have  been to two schools in the last week.

I've been to several such days at granddaughters' school.  It runs to same ideas  each time.  Classroom inspections, then a concert in the hall and then morning tea.  The school's in Sydney's west and with my erratic buses here, I have to leave very early to be there by 9:45.  I have several times suggested a later start to the day.  Not every one lives locally and not everyone has a car.  This time round, I missed the classroom bit as my bus to station just didn't come.  This had repercussions down the rest of the transport line.

I don't know whether the person who used to organise these things has left the school, or whether they forgot and threw things together at the last minute.  It was poorly done this time round.  Presentations were very sloppy and under rehearsed.  Movements on and off the stage were cumbersome.  They are usually done very efficiently.  Second class did a Mary Poppins medley which I suggested to  son should have been the Mary Poppins muddle-y.  Children quite plainly did not know just what they should have been doing and turned in all directions, some bobbed down, some up, while others put either hand in air.  I was not impressed as I had left home in cold and rain at 7:00 am.  The dance groups elder granddaughter was in were efficient and pleasing.  The whole assembly lasted at least twice as long as it should have.  The girls are changing schools next year, so hopefully things may be different then.

The other grandchildren go to school on central Coast.  Another early start but the day was beautiful and sunny and  the 90 minute train trip was pleasant.  Their Grandparents' Day started at 10:15.

I went into 1st class to begin.  Master 7 insisted on showing me every page in everyone one of his books.  I was really surprised how well he writes.  Both execution and ideas.  Very neat writing for what had been a six year old boy for most of the year.  Perhaps his complicated lego constructions have helped with fine motor control and concentration.  He gave me a  certificate, done by the teacher where he  had filled in my name and his as a thank you note for coming.

Each of his class had a question to ask the grandparents who had come and then the visitors were asked to say something short about how their school days differed from today.

A long recess and then I went to visit Miss just turned 12.  She's in 6th class, high school next year.  They are learning about Japan and we saw cherry blossom, did sudokus etc.  A pleasant class room with windows high up so we looked onto trees as if we were in a  treehouse.

There was  short assembly with some well chosen items including a drumming group who were very good indeed.  No rambles from the principal and we were quickly out for lunch.  A much better day than  from their cousins.  Lunch in a local club and a haircut from DIL finished the day. 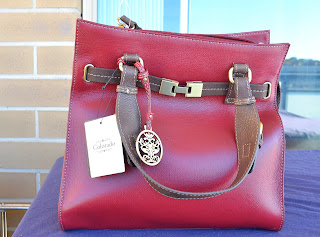 A few months ago, I bought an iPad.  I bought a bag from Strandbags which could be used to hold it and as a general bag as well.  This has not been really successful and  was glad I had not paid much for the bag.  The catch works well but is awkward to latch.  When the bag is open, it gapes, and a bottle I had fell out and broke.  Definitely don't want the iPad doing that.

I was in the local shops today and remembered that Strandbags had sent me a voucher for an additional 10%of any sale or discount price.  This was  a birthday voucher as it is my birthday in a couple of weeks. 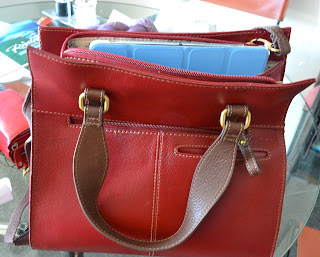 I went into their shop and saw that there was a sale on Colorado bags with 25% off the marked price which was stamped on the Colorado tag.  Birthday vouchers are an extra to deduct.  I found this bag with a  shoulder strap, as I wanted, and bought it as a birthday present for myself.  iPad fits into bag in either landscape or portrait  orientation and there is room for wallet, keys, phone etc.  Their bags are well made and the leather is good quality.  I bought it, paying $55 less than the marked price.  Now to transfer things over.  Now all I have to do is to remember that I have already bought my present!  LOL.

I am glad you are feeling better, and I hope he flare up flares down soon. Wow, that's a big traffic jam truck break down.
You are very canny with your hat wearing advice to your son for his son. I am sure he will be very comfy and warm in that lovely scarf and a hat. How annoying if the two balls had differing lengths. I hope he finds a great job soon.
Well done with your new birthday bargain bag. It looks like a very good fit and is such a nice colour too.

Lovely bag. My one and only "proper" bag is a Colarado too.

I am not looking forward to Grandparent Days or school open days; they were traumatic enough as a teacher and parent!