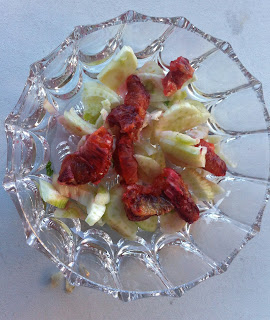 A mix of knitting and cooking, today.

Good news to start is that  my son seems to have landed a job.  Another not-for -profit area which is where he has been employed for some years now.  He has to have a medical on Monday but there's no reason  that he won't pass that.

The dish to the left is a fennel and blood orange salad I made the other day to go with some Tasmanian salmon I had bought.  I never used to like fennel, but have definitely changed my mind.  This was a a very small bulb, finely sliced.  I peeled and segmented a blood orange.   No real reason for that particular orange except that  I had them.  Ordinary orange would also have worked.  I juiced another to make a dressing and then found I was out of oil.  How could I be out of oil!  I mixed a bit of dijon mustard, a bit of good egg mayonnaise and the orange juice.  Cooked the salmon and combined the lot.  It was very good indeed.  It all worked well together. 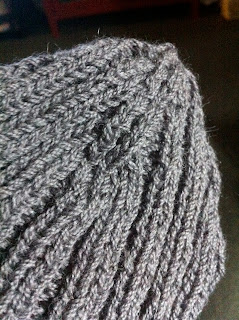 I've spent the last few days making a hat for grandson to take to the snow.  I finished it last night and sewed in the ends on the hat and also on the scarf I had made.  It's made from some Bendigo 8 ply I  had in the stash.  It fits me quite comfortably, although it looks like something his 7 year old cousin may wear.  The double rib both pulls it in when not being worn and expands dramatically on my head.  It's not blocked here and I think blocking would make it look better.

It's an old watch cap pattern and I made it long so that the turn back part will cover his ears cosily.  He says he doesn't want one and that he's been in the area before and wasn't cold then.  There was a small patch of snow.  It was summer.  What did he think it would be?  I think he may find that winter with fresh snowfalls will make him need a hat. The decreases at the top make the hat pointed like an elf's hat when not on a head.  However,  once on, it fits quite well with no sign of pointiness. 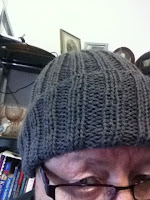 The weather here is atrocious today.  Strong gale force winds have beached boats on the harbour, blown trees over, taken down power lines, caused blackouts and damaged roofs.  I went shopping earlier and it was very unpleasant with dust and leaves swirling around.  There were lots of small bits of casuarinas, sheoaks, on the footpath and a  two metre piece of gum tree landed near the bust stop on my way home.  It didn't hurt anyone but wasn't pleasant anyhow.  Long, but the branch was young and skinny.

It's not very warm and much colder when the windchill factor is  taken account of too.

My daughter in law sent me the recipe for this cake several weeks ago.  we both enjoy ginger.  I was going to friends' house tomorrow and made this to take.  Unfortunately, just as I shut oven door on cake to cook, I received a message from my friend.  His car was suddenly seriously ill and he was waiting for a tow truck.  It seems either the clutch or the gear box has died.  Either says dollars and dollars.  As the car is old he may buy another. It's never given him trouble before and has been looked after very well by Subaru garage.  We've been discussing a new car now for about three months.  Perhaps this will force his hand.  I doubt we will be going south tomorrow.

So here's the cake and recipe.  I don't know where it comes from.  I had sen something in Delicious but this is different.

1.5 cups flour.  (recipe said plain but I accidentally used SR and it still seems to have worked.

Cream butter and brown sugar.  Add all the gingers and the spices and zest and mix in. Mix in molasses.  Add eggs one at a time and mix.

Sift flour and carb soda and fold in to creamed mix alternately with buttermilk and vanilla.  Put in greased  loaf tin which has baking paper in bottom and  bake for 40 minutes at 160°

My oven is fan forced, you may need 170° if not fanforced.  Cool in tin for about 20 minutes then on rack till completely cold.  It smells amazingly good as it cooks and tastes even better.

Good news about your son's job. Hope it all goes well. Great minds think alike- I bought some fennel and made a fennel, apple and celery salad with red onion and a lemon and olive oil dressing. It was delicious and yours looks fantastic too. I plan to make a fennel and potato gratin next week. Yum!!
I saw about the wild weather on the news, hope it settles down soon.
Good hat and I am sure he will ahve cold ears and will appreciate the great hat.
Oh, I shall have to try that recipe for morning tea one week. I like ginger too. Some modern recipes are very wishy washy with the amount of ginger they use.
Good news it's just a minor car issue.

Great news about son's job. Did I tell you my SIL starts his new job on Monday?

Hope the weather is better for your trip south tomorrow; today was truly a typical, old-style August day!

Good news around, will have to try the ginger cake yum