the good and the bad 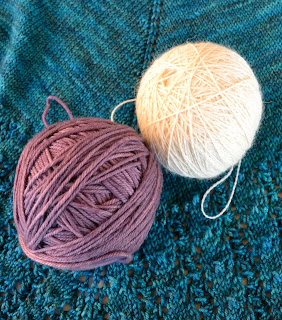 The saying says there is a bad apple in every barrel.  I haven't had that bad apple with yarn since I threw  away in disgust a skein of Araucania sock yarn which was a mass of knots and tangles.  That was about four years ago.

The background here is some Madeline Tosh 5 ply, colour Cousteau.  It wound perfectly with no problems. The first ball of Madeline Tosh Vintage, colour Briar turned into a hat.  Again no problems.  A few days ago I thought I would wind the second ball for fingerless gloves or perhaps a cowl.  It's shown here , finally wound.  It took at least six hours over three nights to wind this and when I had finished, the ball itself was so sloppily wound that I had to rewind it.  There were multiple knots  all of which I unpicked.  The flow of the yarn was just about non-existent.  It went  for several metres in one direction, then turned back on itself.  Sometimes it crossed diagonally to the other side and twisted itself under other parts of the yarn and then back again with more twists.  I was very glad when I finally reached the end.

It looked as if a cat had found it when the wool was hanging up to dry and had a good play with it.  There were no knots in the 200 metres, but there were two hard splices which felt almost like a small pebble.  The dye had not penetrated the splice  so there's a small area of white on the yarn.  Not happy, Jan, literally. 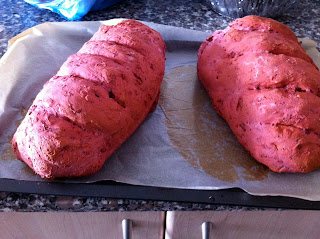 This bread of a somewhat startling colour, has beetroot in it.  I had one large beetroot and three small delivered.  I like beetroot in many different ways but have been out for a few meals and the beet were still in the fridge.  I could find bread recipes with cooked beetroot, but this was one large beetroot grated raw.

It's quite nice as bread and apart from the colour, the beetroot is not particularly noticeable.  I sliced down the length of the second loaf today, the first has gone, and toasted one side under the griller.  I put some chutney and cheese on the untoasted side and grilled it.  Along with a couple of small mandarines and a glass of water it became my lunch.  The chutney added a different dimension and I enjoyed it all as I sat in the sun.

The ginger cake for which I gave the recipe in the previous post was amazingly good.  It smelt wonderful and was  lovely and moist with a deep, rich flavour.  I took it down to Mittagong last Saturday and opened the container at morning tea time.  People could smell it all through the house and hurried so they didn't miss any.  It all went.
Posted by Jan at 2:38 pm

I'm sorry to read you had so much trouble with a well known brand of "luxury"yarn - will it put you off buying more?

I have two skeins doing exactly the same thing. I only wound a few loops and it was tangled beyond belief. Oh, cheese and chutney, you are making me hungry ad it is far too late to be eating now. Yum, your beetroot bread looks so great!!