Are those snow clouds, mum?

We used to spend the winter holidays in the Blue Mountains, west of Sydney.  Those holidays were then in the last week of August and the first week of September.  In other words, now.

We stayed at Lawson in a tiny house which Mum and Dad later bought as a home while they built next door.  Lawson is usually too low to get much snow, although I was there some years ago when everything was covered reasonably heavily.

Our question was always hopefully asked of Mum when we travelled higher up was, "Mum, are those snow clouds?"  Mum and Dad both grew up in Lithgow where my grandmother lit the fire in March and kept it going till November.  Lithgow is in a funnel shaped valley which runs north/south and can be bitterly cold, with snow and icy winds from the south.  Why we never asked Dad, I don't know.

I was reminded of this last  Friday.  My friend and I went to the Southern Highlands for our annual weekend away with other  friends.  We went driving on Friday afternoon in the cold.  we were really just sight seeing, not going anywhere in particular.

Late in the afternoon we turned down the road to Wombeyan caves.  We passed vineyards and studs, all with beautiful houses and well fenced paddocks.  I  haven't been down that way for possibly thirty years or more.  We'd heard the road deteriorated rapidly once houses had been left behind.  Overhead were dark purple clouds and rain started which turned  to snow.  Light admittedly, but snow.  We reached  the turnoff to Joadja, the old ghost town once a thriving shale mining community and decided we would be stupid to continue.  So we turned around.

It was freezing with a strong cold wind so we headed back to the motel. Other people also reported snow on the Saturday morning and today's Herald mentions Bowral as one of several places where it snowed over weekend.

Saturday was very cold.  The temperature about 8:00 am was -4 indexed  down in accounting for wind to -7.  It didn't get much warmer for some hours.

Sunday was warmer but I was tired.  My hip was sore and I had tossed and turned.  Then at 1:30 am, I was woken by a bright light and a loud noise.  My TV in my room had come on and was playing something about the start of the Beatles.  I flew out of bed, if it was loud to me without hearing aids in, then it was very loud indeed.  I finally had it turned off but didn't get a great deal more sleep that night.  At first I thought that some really "clever" person must have  turned the timer on.  However, I hadn't used the TV at all and it hadn't come on on Friday night.  One of life's little mysteries.  When we handed keys in we reported it and I saw the manager coming down to investigate as we drove out.  My friend is going overseas tomorrow so we mad a fairly early arrival home as he had odds and ends to sort. 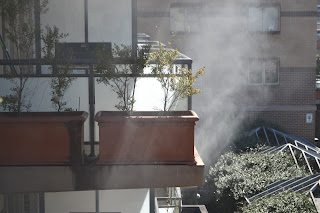 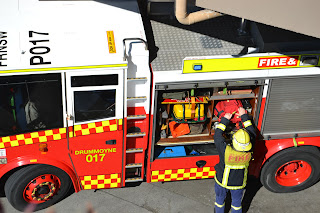 I sat on the lounge till I smelt smoke and got up to investigate.  The unit on floor down and one across from my place had smoke coming out of it.  In no time flat, there were three fire engines from three different brigades there, along with an ambulance and paramedics and about a dozen police.  I know nothing of the cause or the extent of the damage.  I would go on balcony and take a photo and then come back for a breather.  It took quite a while for it to be extinguished and firemen worked  from the front balcony, about four metres from mine but lower and when I went out my door, there were more firemen inside using one of the buildings many fire hoses as well.

They had breathing apparatus on.This morning they had a normal household hose over the balcony syphoning water down into the garden.  Possibly this was cleaning up. I think it would be hard many hours later to be able to syphon off enough to have the hose really running.  Top picture shows smoke when fire was almost out.

Picture on right is of the last fire engine coming up from the underpass at the end of our building.  That was blocked by two appliances.
Posted by Jan at 2:38 pm

My, you are leading a life full of excitement, aren't you?

It has been an exciting time and what a strange TV happening. Very spooky. Glad you were safe from the fire but it must be awful for the people in the flat. So you didn't see any snow then????