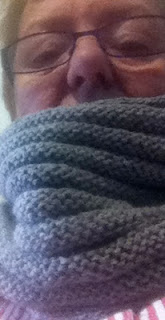 I have made an i-cord edging both top and bottom to stop the edge stretching.  It's firm but not tight and makes a neat edge to the cowl.  It still needs blocking, I've been slack that way lately.

Thank goodness DIL has cut my hair since I took that photo.  The cut was several weeks overdue.  There was a great pile of clippings on the floor when she had finished and the colour was quite different too. 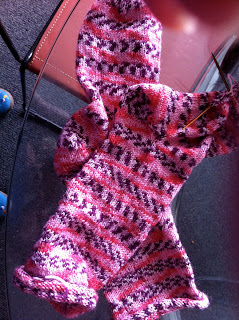 I do wear some pink.  The blouse in the first photo is an Ollie and Max pink stripe.  But I prefer other colours to pink.

I think that's part of the reason I have had so much trouble finishing these socks.   I could not tell you how long they have been on the needles.  I know I bought the wool when I went with Lynne about a year ago when she took me to get dad's tapestries framed.  I started them as  my go-to knit for when I wanted a change or had nothing else to do and my guess is that it could easily be ten months since I started.  Instead of a go-to project, they turned into "avoid these at all costs" lot of knitting.  I was determined to finish them so have been working doggedly at them.  I have only a few centimetres to the toe of the second sock.  They are blindingly pink.  However, not long  now and if I settled to it, I could probably finish the knitting tonight and leave the grafting till tomorrow.

School holidays week 2 up here.  Grandson, I can hardly now call him Master 13, he's so big, and his  mum are catching the plane  tomorrow to Brisbane so he can play soccer in an under 14 State team.  He's been appointed co-captain and is extremely proud and excited.  They are hoping to sell their house soon and are painting.  So I have the two girls from tomorrow.  Son wants a free run tomorrow afternoon and the holiday Monday.  I'm a bit iffy about this.  He's always telling me that they amuse themselves very well, and that's true.  If so, they could still be at home.  I realise I need to have them from Tuesday to Thursday as he will be working and DIL will be away.  I did point this out to him but he overlooked it.  I wouldn't normally mind, but while I am very much better than over the last few weeks, I am not yet right.  I told him to tell them not to expect  outings every day because I just could not cope with it.  My hip is much better, but I'm still not walking quite properly and that has been putting  strain on my back and tiring me.  So they will be here tomorrow morning till Thursday sometime, not sure just when.  Miss 12 and I did lots of things in summer holidays when she was here for a few days.  My grandmother and I did lots of things too.  It's a grandma thing, I think, but these two girls will have to catch up another time. 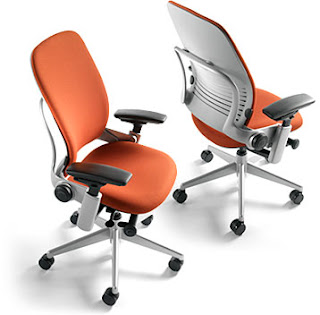 I think a licence may be needed to work this chair.  There are very many adjustments possible.  The armrests have four possible adjustment.  Just armrests!

My computer chair has had a lot of use.  I've used it for the last almost five years and I  think it was first bought when my son set up his first home office some twelve years before that.  I think it may not be contributing to back and hip problems, but it's not helping.  The hydraulic lift mechanism is on the way out, the seat no longer tilts and the back can't be adjusted.  The padding in the seat is breaking  down and it's very uncomfortable to sit on.  I would fix that if there were no other problems.

I asked son for a recommendation.  He downplayed Officeworks and found one of these on eBay.  I had found another with a tall moulded back but he insists he would have bought one of these if available when he bought his last chair after back operation.  He said these are the Rolls Royce of office chairs and he'll buy it from me if I don't like it.

You can see more about  them here at Steelcase chairs.  There was no way I was paying that sort of  money but he found a grey one on eBay.  Auction finished at 1:00 am last night so I set my top price and won!  He says the model I have won is closer to $1400 and I paid a good deal less than a third of that.  Seller will drop it off here on Monday afternoon, another reason I can't take granddaughters out.  Seat tilts and can be made longer and shorter according to length of thigh, back has lumbar support and tilt adjusts and more.
Posted by Jan at 5:27 pm

The cowl looks snuggly and warm and well done!! I understand the sock procrastination, I am the same about things and when I finally sit down to finish them it takes hardly any time at all. Congratulations to your grandson!!!!I always loved spending time with my nan, there is something special about grandparents!! Nice chair and such a bargain. I hope that your hip continues to improve.

The cowl looks lovely and warm. I'm sorry your yarn purchase was less than inspiring! The chair looks very comfortable. Have a great time with the grand-daughters and congratulations to your grandson.