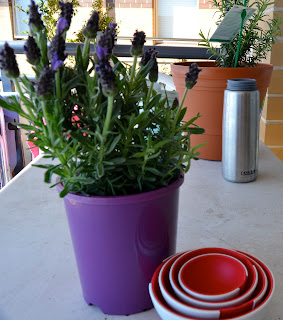 Part of the chorus from a song I learnt many years ago when I was a child listening to the ABC children's show on radio.  I've already posted a copy of my Argonauts' members certificate some time ago.

Spring is definitely in the air, despite the snow at Bowral last weekend.  August winds still linger on at times and they have been very strong through the week.  I think half the western plains of NSW have  blown onto Sydney.

However the air feels different, it's spring.  Blossom can be smelt and the wattle is blooming deep gold.

I was in Colesworths yesterday.  They had pots of daisies, lavender, small tomatoes etc and shoppers were clustering around them like bees to the honey pot.  I bought a lavender to go with the rosemary which I bought a few weeks ago.  However, they had no larger pots.  I'll have to walk down to the hardware shop for something to transfer this to.  Actually, they  had no pots at all.  That particular shop is a bit of a dead loss.  The same shop in another suburb is about the same size but better laid out and with a much bigger range of goods. 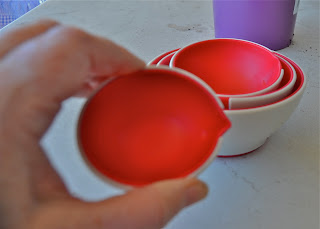 The small bowls are part of a belated birthday present.  I had a voucher given me as a birthday present for Howards Storage.  I like a lot of what they have but it's a bit like walking into a good stationery shop, a trap for the unwary.  However, the voucher had only another couple of weeks to it, so I went in.

I found these bowls which are actually measuring cups.  The largest is 250 ml, one cup.  My measuring glass is getting well past its prime.  It's tin, not glass and the painted numbers are almost illegible as it's quite old.  So I bought these.  The cup can go on top dishwasher shelf but not in the microwave.

The design is rather neat.  The outside white is a firm material, plastic of some kind.  The inner red is a soft material and with the break in the plastic, the cup  can be gently squeezed to make a pouring lip.  This photo's a bit blurry.  It was hard to hold heavy camera steady with one hand.

I still haven't blocked my baby alpaca shawl with yarn from Suzyhausfrau in  Canberra.  In fact I haven't done much actual knitting at all this week, although I've thought about what I would do next.

On Tuesday, Grandma Flea came to see me and I gave her some yarn for the Epping Library Knitters.  I had a big striped bag of mostly wool, although there was some acrylic, not much.  Acrylic burns my fingers so I rarely buy it.  When I said I had the wool to donate to making squares for rugs and other small projects  to give away, I was given a box of needles, lots of wool, some of it small balls  and some larger amounts as well as some knitting and craft books.  So Grandma Flea braved the streets around here and we sat and talked for quite a while.  It feels good to have passed yarn onto people which will use it.  Apparently their supplies were a bit low, so they've had a boost.

An email through the week brought news from Canberra of this yummy looking  organic merino and alpaca mix.  Just look at the beautiful colours.  The service is very good so I bought two skeins.  My son will probably be in Europe for a while in their next winter so I thought I'd do a scarf for him.  He's 6'5" so there is quite a lot of knitting in a decent size scarf for him.  I loved the raspberry colour and the one called thyme but can't quite see him in either!  He likes his charcoal alpaca hat I made a few years ago.

It's always a great feeling to give something to someone who can make use of it when we can't!

Too much yarny goodness on that site!

I have that song on my head now. I do love your 'Colesworth' word!! I do like lavender, and even I can see it needs a larger pot. Why would they not have pots??? Very cute little measuring bowl. Gilly stole my good jug so now I have a few from the $2 as well as my proper measurers. That is indeed such pretty wool in lovely colours and good meterage too. No, I can't see him in the raspberry either. It should be very nice to knit with.