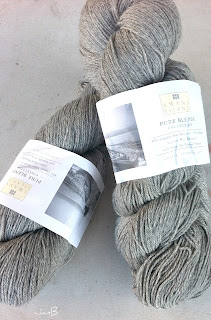 So I went down in needle size.  As I plugged away at it, the prospect of knitting this amount of yarn on those small needles hit my brain.  It would take forever. So I ripped it out.  I didn't have much to show for the time I'd spent on it, perhaps six or seven centimetres. 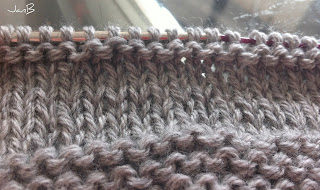 I wound the second skein and started again, this time using the two strands together with 4 mm needles again.  Much better indeed.  It's still soft and snuggly, not at all stiff in drape but certainly a good deal quicker to knit.  This picture shows the beginning of the scarf.  I wondered about a pattern.  Son likes things fairly plain, but metre upon metre of garter stitch did not appeal much.  I wouldn't do stocking stitch as it would have needed  a wide border each side to prevent rolling.  I've done the one row rib scarf before, but again did not want to do that again, nor loads of moss stitch.  So I'm alternating an inset of stocking stitch  between the garter  stitch.  It still won't be a quick knit and somewhere down the line I'm sure I'll grumble about the slowness.  It will be lovely to wear. Warm, soft and cosy.

I get annoyed when a good idea or workmanship is spoilt because of something small.  This is my clothes airer which I use both inside and on the balcony.  Or actually, the picture is half the airer.  The other half is full of underwear.  I'm not my mother who hid her undies on the line between rows of other clothes, but I have deliberately omitted them here. 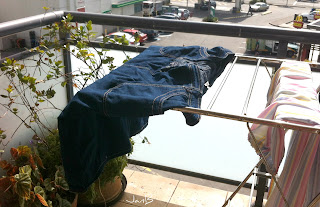 The airer is strong and light.  It is lower than my balcony railings which make it quite legal  for the by-laws here. It's easy to use and folds down to a fairly thin piece which I  store on the balcony behind  my spare outdoor chairs.  It holds a lot.  The chrome is still in good condition, like new.  However, the manufacturers have let themselves down.  The rivets they used to hold pieces together are going rusty.  Very rusty.  Cheap  and nasty materials have spoilt a good concept.  I've seen similar designs but of inferior  quality.  This one was twice their price and I'm disappointed in the manufacture.  Of course, I've long since thrown out the piece of cardboard which was around it with manufacturer's name on it.

Since I hung out this small load the sun has disappeared and it's become very cloudy.  Hope it all dries.  I may have to put it in second bedroom where things dry fairly quickly.
Posted by Jan at 10:56 am

I started knitting cowls as a substitute for scarves because of the length of time a scarf takes -- plus I can make three cowls for the same amount of yarn! But that, of course, was not an option for you so I'm glad you've found a workable alternative. But will you have enough yarn to finish now that you've doubled up?

Today's weather has changed -- I am inside but am now in track pants and a polar fleece jacket (can you tell I feel the cold?); it's probably warmer outside but I have to do sitting still indoor things!

I thought of one kilometre of 4ply and nearly had a conniption!! I am glad the wool doubled is still soft and drapes well. The garter and stocking stitch will make it a bit more interesting and still masculine. How disappointing that the rivets are rusty. I have no suggestions on how to fix that at all.

Hope you make it to Wollombi and put some things to rest. As well of course get to meet the lovely ladies at Wollombi Wool Store. They also have a Ravelry Group