a week in review

So what is the difference between taking a frisky puppy for a walk and taking a seven year old to the zoo?  Not much in terms of distance covered by either.  Last Sunday I left early to meet most of the family for my birthday outing to the zoo.  This had been postponed four times since late August for one reason or another.  DIL persisted and most of the family made it last Sunday.  We would have called it quits if this had fallen through.  Christmas is rapidly approaching and the family gathering is December 9th.  Early, but the only date we could all agree on.

Little boys are like puppies.  Here, there, back again and then down to the next exhibit.  Then do it again. I didn't get a lot of decent photos as the day was very cloudy with a lot of smoke haze.  There were three controlled burns on the Northern Peninsula and one which  was uncontrolled.  At 9:00 am, the smoke swirled over the harbour and all was grey. 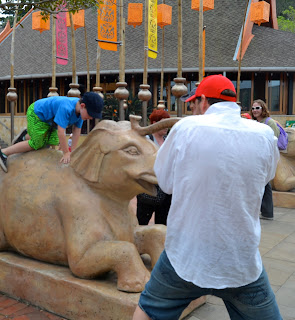 Eldest son and wife were there, myself and his younger brother and wife and their two children and the friend of Miss twelve.  It was quite hot but not as bad as the day before.  The zoo has many shady trees and there was a breeze off the harbour.

We had lunch near the elephants and this is Master 7 climbing on one of the Thai elephant models.  His uncle is bending taking the photo and his dad is in the background with white sunnies.  Note the care taken of his back.  He is bending knees not leaning over.  We all brought our lunches and drinks.  Zoo food is prohibitively expensive.  However we did splurge on Calippos and Paddlepops.

We saw lots of exhibits, the Komodo dragon, lots of snakes, the big cats.  The Sumatran tigers were very beautiful but were asleep on rocks after lunch.  Some of us went to the snake workshop, my grandson among them.  He was the boy who last year talked about nine legged spiders with the extra to hold up the head of large spider.  They watched the seals play games.  We saw the condor on a pole and very much more.  Miss Twelve and her friend tried to look suitably bored all day but really enjoyed themselves.  Miss Twelve had a meltdown once. She feels grown up but is still a child and she had wandered off and no one had any idea where she was. 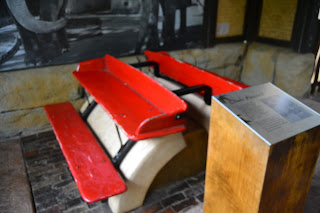 I remembered the  elephant rides I had enjoyed as a child.  I don't remember the seats being quite like this arrangement but I suppose there must have been something similar.

As I said, we arrived there early.  I left home just after 8:00 am.  I arrived home a few minutes before 6:00 pm.  I was exhausted and glad in a  way that the earlier dates had been cancelled.  I realised my hips would not have coped at all a few weeks before.  As it was, I was very stiff on Monday.  For those not from Sydney, the zoo is built on the side of a  very steep hill overlooking the harbour.  Many of the paths now zigzag but there are still steep spots and lots of walking.  Leaving the zoo and walking down to the ferry was quite steep. 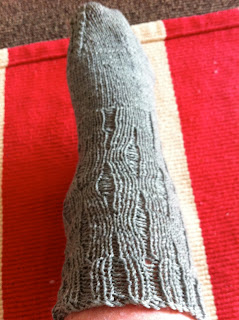 I'll pass over the next couple of days where I had a nasty tummy bug.  I did manage  to complete the first Hickory sock in this very uninspiring shade of grey.  There should be another pattern repeat down the instep, but I knew I couldn't finish one more repeat before the toe and the tummy bug cut my concentration very drastically.  I'll do the second sock and offer them to my eldest grandson as bed socks.  His uniform socks are now a different colour and I know he loves warm socks on a cold night.  Quite the opposite to me.  On the occasions when I try bedsocks, I find they are kicked off and I don't even remember kicking them off.  Even if the weather is really icy, I don't use them at all.

The pattern is a travelling rib and would have looked very much better in the original deep purple I had chosen for it.  That was the yarn which was really hopelessly entangled and which I threw out.  I had not wound even a quarter of the skein and that had taken many hours.

Just before dinner tonight I wound this Fibranatura 100% washable merino.  370 yards.  These shades were similar to the yarn I pitched out.  I bought this at the Granny Square, the offshoot from Morris and Sons, once Tapestry Craft.  Their little shop is on the site of the Former Champion Textiles shop in King Street , Newtown.

Here are some of the colours.  I'll be interested to see how they knit up.  I had two skeins of this, bought several years ago.  The first pooled dreadfully and I was unhappy with it.

Off to bed I think.  The bug has gone but I'm still tired from it and today I had another trip to the audiologist in town this morning.  Congestion behind one ear drum is still there.  Really, I doubt much can be done, but he's a very pleasant person, trying to help, so I will take his letter back to my GP and see what he has to suggest.

I can say that tummy bugs are going around. I hope it goes away quickly and you feel well soon. Glad you had a wonderful time at the zoo, I remember going there when I was a teenager. It is hard to be 12-ish, you are neither here nor there. I was lucky my repeats worked out perfectly for the foot part, I don't wear bed socks either I kick them off and am always way too hot!! Beautiful colours in your new wool, I look forward to seeing it knitted up.

The trip to the Zoo sounds like fun. Our two grandsons are not quite old enough yet! I had a tummy bug a couple of weeks ago and bad sinus congestion on Thirsday -- much like a cold but it comes and goes much more quickly! I hope the smoke over the Zoo didn't play havoc with your sinuses!

The zoo sounds like it was quite the gathering and lots of fun. I think when we go it ends up being really hot for some reason, and yes zoo food is extremely expensive isnt it. I hope your hips loosen up and dont feel as stiff for you.

Trips to the zoo are *exhausting*! A close second is a trip to Questacon in Canberra. (Old mamas like me need a seat while the overactive little kid tries every darn exhibit ... for hours.)