Guilty?  Yes, guilty to throwing out some lovely sock yarn.  The lovely yarn I had started to untangle last week resisted all efforts to produce anything usable.  I spent somewhere between 8-10 hours over the week, concentrating on untangling a horrible mess. I think I ended up cross eyed more than once as I traced the path of the tangle.  After all that time. all I had to show for it was a ball, perhaps 5 cm in diameter and a still enormous tangle which seemed to never decrease..  Yesterday I threw it out.  I could take no more.

I pulled the box of sock wool from under my bed and picked out the first solid colour yarn on the top.  Quite  a contrast, not Patonyle but similar.  I have used this in the past and it's hard to knit but but comes up well with a wash and is long wearing.  It's school grey.  I think I had planned on making eldest grandson some school socks, but he changed schools and colours.

I started the Hickory sock in the book Cindy gave me.  I see she's also done that but it was what I had planned when I thought the tangle would be wound quickly.  I started it last night and am now part way down the gusset decreases.  It's a quick knit, although I too made the leg shorter. 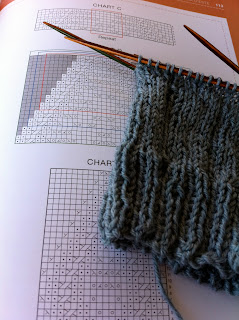 About the only thing I've found to criticise in that book are the charts.  Some are quite large and they are fairly cramped on the page.  DIL commented that I would need to use son's photocopier and enlarge them on that.  Yesterday I took a photo of the instep and leg charts for Hickory.  Downloaded them into Evernote and  from Evernote on my computer it was pushed automatically to iPad and iPhone which both have the same program.  Away we go with the iPad.  A few moves of the fingers and the chart is now readable.  Brilliant.

The picture shows two charts, or parts thereof.  There's quite a lot of detail in them and they really need to be bigger to be used easily.  This was the sock just after lunch today.  I've now turned the heel, even did a heel flap and am decreasing for the gusset on the foot.  I decided to follow the pattern, so did the heel flap.  I thinks it's the first time in several years that I've done one.

I found this magazine in Coles today.  I rarely look at the magazines as I find that something to flick through while I have coffee can easily run away with money.  However, I had heard of it from British knitters on the ravelry group concerned with  Kerrie Allmann's broken promises and non-delivery of goods.  And much more.  Her latest venture is apparently run by a family member.  Too bad he died many years ago. 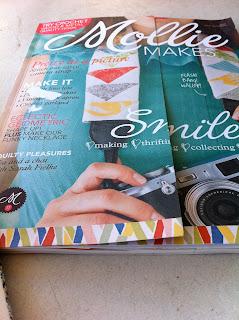 Mollie Makes isn't cheap.  An overseas subscription copy costs about AUD $12, even with a large discount factored in.  It 's fairly thick and looks attractive with a lot of clear photographs.  However, while it has lots of ideas which seem up to date, like fabric flower decorations, there is not a lot of substance to it.  Quite a few fabric crafts are covered.  Several pages are devoted to a camera strap made from triangular patchwork.  The strap is shown attached to a fairly heavy camera.  It's too wide and would fold in  two and be uncomfortable.  It's backed with light canvas but there is no interfacing in it for strength.  It also needs a sliding quilted, padded piece for comfort on the shoulder or neck of the wearer.  DSLR cameras are heavy.  My Nikon is heavy even with a smaller lens in place.  The big  18-270 mm lens makes it very heavy.  I use a solid Sunsniper strap which is very comfortable and secure, much better than the original strap.  It has steel running up the inside of the strap so it can't easily be cut.  It attaches with a carabiner clip which sits camera on my hip, a comfortable place for it.  If I want to use it the camera slides up the strap for action.  Nowhere near as attractive as the patchwork triangles, but many times more practical.

There's a pretty crocheted garland draped around a baby's cot.  There is a warning about no leaving baby unattended while garland is in place, but why put it there in the first place? 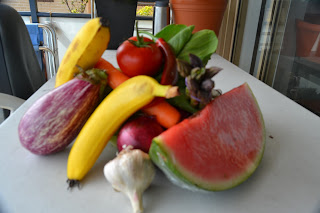 Current good nutrition advice suggests eating as many different coloured foods every day as possible.  That doesn't mean differently iced donuts. These are some of the different colours found in my fruit and vegetable delivery on Tuesday.  There were more green pieces which would not fit easily in the photo.

As a child I did not like either watermelon or rock melon.  Now I eat both.  The watermelon did not last long as I find it's better eaten fairly quickly.  I didn't want it going slimy, even kept in the fridge.
Posted by Jan at 8:30 pm

I'm so sorry about your sock yarn, how frustrating! It seems rapid progress is being made on the substitute yarn. That picture of fruit and veg makes me hungry and it's only 9:20!

I totally sympathise with that feeling of complete frustration when you just can't get the yarn to untangle.

I have done that with wool too. I felt guilty, but it was such a tangle, worse than a Damocles knot. Your new wool looks great. I enlarge the charts at the newsagency on the photocopier. I can write on them then too!! I had a quick look in that book and dismissed it all show and no substance. It is very showy but lacks any real innovation. I think they poorly copy other people's ideas.
Love your colourful display of fruit and vegetables. I always try to have colourful food too to get the maximum spread of vitamins and minerals etc. I heard on the ABC that a study in the UK said happy, healthy people at at least 500g of fruit and vegetables a day. They are not sure if happy people are organised enough to go shopping, or good food makes you happy!!

Your bananas and tomatoes look so nice. I tried to order a fruit and veg box in my area, and after 3 emails I heard nothing back so gave up. I think I will just pop into my local fruit store in the country and grab some nice tomatoes and things for the week as we are going to have very hot weather.