the little engine that could

The little engine puffed up the hill, its boiler almost bursting with the effort.  "I think I can, I think I can," it repeated to itself as it made its way up the slope.  Suddenly it reached the top and saw the down hill run in front of it. 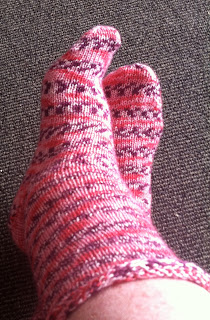 That's somewhat I feel like about these socks.  I bought the yarn around this time last year and I think the socks were started possibly January or February as back up knitting for in between bigger projects.

I grew to dislike them immensely.  I hated the colour and did not realise it would be so bright.  I like purples but I've never been much in favour of pink.  I hid them in the back of the cupboard with knitting stuff and they would fall out occasionally when I took something out.  I sat them where I could see them.  That meant I just ignored the pink presence.

The last few nights I've actually taken them out and looked at them.  Occasionally I've done a few rows.  Then last night I convinced myself to get a move on.  I promised myself that I would not start something else till these were finished.  There really was not a lot to do before toe decreases started.  So last night as I watched the architect George Clarke on the restoration of two ancient towers in Britain, I worked on the socks.

This morning I had a delivery of meat from the Butcherman due between 9-12.  I did the decreases,grafted the toe and voilà, I was finished.  Look, they are even identical twins.  I really don't care particularly if stripes don't match.  These do.

I think these will go into the present box, I don't think I could bear to wear them.  It's a bit rainy today so possibly tomorrow I'll give them a quick rinse and put them to dry.

I am not a pink person either, so well done for persevering. They are pretty for someone who likes pink I think.

That is the only way I could finish my capelet, not letting myself touch anything else till it was done

Hurrah! You did it! Of course you did!

You could try over dyeing ... Just a thought!