I have a coffee mug given by one of the grandchildren some years ago.  It says, "Groovy Grandma" on it and shows grandma with all the latest gadgets.

It seems I am not as groovy as I thought.  I mentioned my old clock radio, over 35 years old, had died.  I bought a new one on special in Target and came home to set it up.  Groovy Grandma worked her way through the poorly written instructions but finally came to  a dead end and could go no further.  So I put it aside till help arrived. 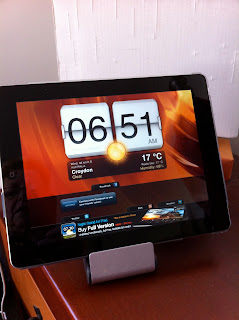 This was sooner than I expected.  #1 son arrived in cab at my place from plane home from Perth.  He was supposed to be picked up by DIL but she wasn't answering her phone and he waited nearly an hour.  He had a look at instructions and then told me that two other people he knew had reached the same stage and could go no further.  So probably not my fault.

However, he suggested packing it all up again, it hadn't been used and returning it to Target.  So  what would go in its place?  Why an iPad app of course.  So groovy grandma who works her iPad hard in various ways had not even thought about an app.  He recommended Nightstand.  All I needed, I didn't really want  the radio part.  I plug charger into wall, plug in iPad and app displays all night and charges iPad at same time.  It's easy to read and colours and brightness can be adjusted.  This is the free version, so there's an ad at the bottom.  That doesn't worry me at all as I'm asleep!  I will investigate the paid app as it costs only $1.99.  It may have features I would use but haven't thought of.  I returned the purchase yesterday and got a refund, no problem.

On Saturday I was checking the Big W website for some detail.  On front page was an ad for that day only purchase, online only, of a Roomba iRobot vacuum cleaner.  It was a very good price that day so I bought one. #1 DIL has one and I've used it many times.  They work well and it's so easy to set it running every day or so and everything is always lovely.  I have a Vax which I bought several years ago.  It too works well but makes my shoulders and back ache.  I will give it to son.  My place is ideal for the cleaner, small, flat.  It zooms around and  returns to base station to charge again. So groovy gran is back in the saddle.

I went to son's place on Monday and DIL did my hair.  It is fine for ages and then is terrible.  It was son's birthday.  I wasn't looking  forward to visit but it was much better than I expected.  She still wants him to leave but hopes they will get back together again in a few months.  I'm not so sure this will happen but will keep my mouth shut.  He was fine but apparently had a panic attack when she was out after I left.

He is seeing a psychologist today for the first time and will get recommendation for professional counselling too.  I can withdraw from the counselling side which is not really me, although I do know theories etc.  I'd much rather just be his supportive mum.

They are looking for a decent place to rent for him.  There's not much around up there, many to lease are just dumps.  He did find one place yesterday, near shops and trains and a three bedroom town house.  He' s applied.  I hope he gets it.  Panic attacks are very nasty things.

Jill, lovely to hear  from you.  I appreciated your comment.  It's been quite a while.
Posted by Jan at 11:00 am

Smart use of your iPad! I, still using the battery operated sweep hand clock I bought at Sydney airport on my way to the Philippines in 1993. WM has been through at least two clock radios in that time!
I wondered what you were going to do about your hair when you told me the news but figured that was the least of your concerns then!
I'd love a robotic vacuum cleaner but we have a large open plan house with both wooden floors and carpet -- it's the carpet that's the issue! We have a Dyson which we like but it's so big to haul out just to do the lounge room carpet.