not a good week

This has not been a good week.  I  have done no knitting.  It probably would have helped me, it has in the past, but I have ben very stressed and barely able to think straight.  My typing has been terrible, I have burnt food and had little sleep.  I didn't trust myself to knit.

One DIL last weekend told one of my sons she wanted him to move out.  None of us saw this coming and he is utterly sideswiped and devastated.  Two children involved.  Right at the moment she is being very hard about this.  I'm sure this is a protective measure for her so she can continue to be in control. So she thinks. Really, she cannot make unilateral decisions on behalf of four people and not expect there to be protests. I think there is a glimmer of hope but hesitate to say anything as it may disappear.
One good thing is that son has gone back on medications and is now seeing professional help from someone skilled in his disorder.  This will really be needed if she does leave, but it is also welcome as it will strengthen him.  He's also had some good practical advice from a former work mate who has moved from one  area of law to that of family law.

I've been his backstop, we've always had a close relationship although I try to not interfere in any of their lives.  It has meant I have had to draw upon a lot of  resources and skills.  I have  the basis of A Graduate Diploma in Counselling but not the award.  Only the basis.  I have done all the academic side of this as electives in two other courses, but have not completed the practicum side of it.  I found the courses challenging and interesting but I am not really  a counsellor.  I did the course because they fitted with my main area of study.  It's easy to see why doctors don't treat family..  This has been very hard.

Sydney's west had a bad storm on Thursday afternoon.  We had it yesterday in the early afternoon.  One minute it was fine, the next it was dark and I could not see across the main  road outside.  Hail, torrential rain and strong winds.   Then it was gone.  I noticed westward traffic was very heavy.  I later discovered that the depot and op shop in an old building for the Salvation Army had its roof blown off.  It's only a couple of hundred metres from here.  What was worse was that massive amounts of asbestos fibre blew onto the road.  Fortunately it was sodden in seconds so did not blow around, but a huge clean up was necessary.  A nearby car yard lost most of its glass doors and windows.  Tis also shattered on road and over the stock in the yard. 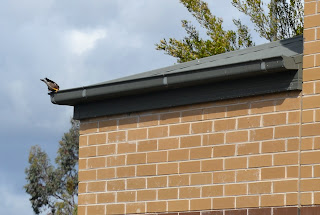 Two mynahs had built a nest in the right angle corner of these gutters.  I thought the baby birds would have been washed down the drainpipe but the birds are still there. Or seem to be.  The parents keep bringing food back, so I suppose the birds are there.

I have been fiddling with my camera exploring using the manual setting only.  There have been some failures but mostly I am pleased with the results.  The jacaranda shown here is at the top of the hill towards Parramatta river.  It's probably a good  ten minutes walk away up the road opposite.  I swapped my smaller lens for the  big 18-270 mm zoom and fiddled with the settings.  I still don't entirely understand the shutter settings and how they work, but I suppose I'll learn as I practise. S you  can see there are still storm clouds around and while it was glary, it was also dark. 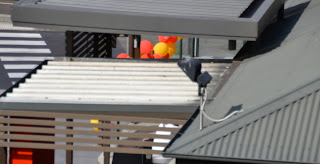 I liked the roof angles at McDonalds.  It was McHappy day down there , so lots of music.  Unfortunately also lots of music playing loudly, although I will say it was better this year than last when the beat of the music vibrated right through this building.  Perhaps they angled the speakers away from us.

Farewell good servant.  Getting into bed late last night after waiting to hear from son I saw my old clock radio dial glowing.  I don't use the radio part of it at all, only the clock.  I turned it off and checked the switches.  I couldn't see anything turned on so plugged it back in.  More glow.  I don't know the problem but I was worried enough to unplug it as I didn't want a fire.  Checking this morning shows it's probably dead.  No shame to it.  It was dad's and I've been using it since 1990.  I worked out they had it before building in the mountains.  That happened when youngest son was two, so 1977.  The radio owes nothing to anyone.  I have bought a new one.  All whizzbang in settings and geared to digital radio not AM/FM.  I turned it on and the display popped up with the correct time with no effort from me.  It's mostly set up but I'll need to ask one or another son how to make sure alarm is off.  Instructions are not really clear. 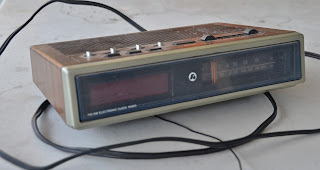 We did, indeed, have a bad storm with some hail but we were mostly unaffected.

I have asked DD to pray for your son and his family too!

I am so sad to read of your family upheaval, and so glad you can be a support and help your son. No wonder you are stressed. Your new clock radio is amazing, it sets its on time?? Wow. No digital radio here, mark Scott doesn't care about our island state. It was a very good old clock radio. Older things last well, I had a TV from 1983 that worked well, just didn't have all the ports and pluggy inny things for modern DVRs. Take care of yourself.

Thinking of and praying for you.

Jan,
I'm so sorry to hear of the stress & difficulties happening in your family at the moment. I hope that your son is able to get the help and support that he needs, and that both he and your daughter-in-law will work towards the best possible outcome for the whole family.
Meanwhile, don't forget to look after yourself, and be realistic about what role you can best play in supporting the family. No matter how skilled we are, sometimes someone else can see more clearly or be heard better than we can.
You are all in my prayers.