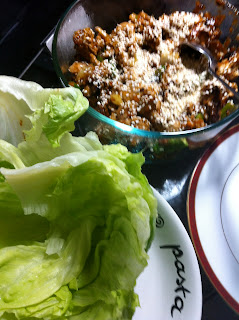 There's been some progress here in a few areas.  No progress at all on knitting front.  I have done none.   My knitting mojo has got up and went!  I have thought about some things but my mind has flitted from one possibility to another and has been unable to settle on any one project.

I think this is symptomatic of all that's happening lately in my life.  Perhaps when that settles, motivation may return.

Son had another blow when he discovered something the other night.  It was something I could never, ever, have imagined DIL doing and it knocked me sideways.  I can't really mention particulars and it wasn't an affair.  Just something totally out of the blue.  As I said, I have warm regards for her and like her a lot.  She's hardworking, kind, openhearted, well organised and another dozen similar adjectives at least.  But this was different and I'm having trouble processing it.

So here we have some cooking, instead of knitting.  I had a pack of pork mince in the freezer  from Butcherman delivery.  This was very finely minced with almost no fat in it.  Rissoles, meat loaf etc seemed very boring.  I also had an iceberg lettuce in the fridge where I normally have mixed salad leaves.  San choy bau came  to mind, so I looked up a few recipes which were all similar.

Brown the mince with lots of garlic and a finely chopped onion.  I also used some chopped red chilli. Add in a tablespoon of soy sauce, I used tamari as it's gluten free so I keep that in house for granddaughters.   A couple of tablespoons of oyster sauce and a splash of tomato sauce if you have it on hand.  I didn't.  One grated carrot and a chopped zucchini go in too.  My zucchini looks remarkably like asparagus as that was what I had.  Stir it all around and cook till done.  When veges are cooked, add drops of sesame oil and some sesame seeds.  As you can see, I had a bit of a disaster  with the seeds and ended up with far too many.  I couldn't scoop them out because they were on a meat mixture.  Actually I like them a lot, so was happy with them, although the amount was really over the top.

To serve, spoon mixture into washed iceberg lettuce leaves and roll to make a parcel.

This was no more time  consuming than making meat balls and I enjoyed it.   I'll do it again.  Can't understand how this recipe was missed as I cook lots of Asian recipes. 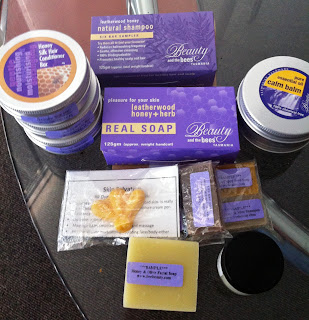 I had an advertising email from Beauty and the Bee the other day.  I haven't bought anything from them for a couple of years but  enjoy their products.  The bar shampoo is  very good and I've used several types.  Long lasting too.  A cake lasts months and months.

I had several people I wanted something for for Christmas and it's obviously not going be something knitted this year.  So on Wednesday afternoon I sent off an order.  It arrived here about 9:00 am on Friday morning by courier.  Pretty good from Tasmania to Sydney.  All the soap pieces at the front are free samples, and the little black pot is foot cream, also a sample.

I bought one tin of the calm balm for myself and have used it already.  I was hot, tired and headachey.  It has helped.  I rubbed it into temples and forehead. Three tubs of a solid hair conditioner to rub between hands and then onto hair after washing.  I had almost  forgotten how good their products are.

Very hot up here today and tomorrow will be much hotter.  The heat which Victoria and Tasmania had yestrday has moved up the coast to Sydney.  Temperatures in the 40s° C are forecast for tomorrow.  I have the place closed up and blinds drawn, iceblocks topped up in freezer and easy food.

Some good news.  As I think I said earlier, my son is seeing a psychologist.  He gets on well with her and this GP and the GP works well with psychologist.  This has made a world of difference to him.  This cooperation has never happened in the past and he's given up in disgust.

He went to psychologist for the second time yesterday.  She was  very surprised and pleased with the progress he's made.  What has happened in the fortnight between visits was expected to take two months possibly.  I can hear the difference in his voice when he rings me.  This is encouraging and it's been good to go back to being his mum and not trying counselling as well.  It also means I can genuinely express my encouragement to him and this is also a help to both of us.

Now to get the knitting underway again.
Posted by Jan at 10:54 am

I'm sorry to read that your DIL has knocked you sideways again!

The san choy bow sounds delicious and easy, so why have I always made it from a premix packet?

It's forecast to be 40 here today and 41 tomorrow. The storm clouds are gathering making it even muggier! I have all the windows open but the blind and curtains are drawn where the heat comes in through the clear panel of the back veranda roof! I am sitting in the lounge room on the western side of the house -- it will probably be unbearable in here in a couple of hours but right now it's not so bad!

I am glad your son is finding good and useful help. It must be a weight off your mind. Yum, your pork dish looks so yummy, I like sesame seeds and I laughed at your zucchini looking like asparagus!!
I love the Beauty and the Bees products, but their postage in Tasmania is prohibitive- it was a set $20 regardless of how much you bought. Luckily I found they had restocked the chemist shop in town so I could just pop in and buy things!!
It's been so hot here too, I know 28 sounds cool but you have to add5-8 degrees to our temperatures to get The Mainland equivalent. We've had lightning and thunder but no rain this evening.
Maybe when the weather is cooler your mojo will be back?? I hope you are taking care and keeping well!!!

Cindy, when I first bought from them, the postage to Sydney was very, very expensive. For what's in the picture, I piad $14, perhaps $14.70 and it was delivered to my door by a courier. Much better arrangements. If you are ever in Hobartt, I think there is a shop there too run by them.

Hope the knitting motivation comes back to you soon. xo