It's been a strange  week and one I really will  be glad to see the end of.  I was sure I had photos of the knitting I had done, but can't find them, so must have imagined taking them.I was using the new book of socks and testing out various fancy ribs and lacy patterns.  Some of the sock have heel flaps which don't suit my very flat feet and I thought I'd just experiment with what was there.

I did, but don't seem to have the photo, the coronet which is at the top of the cuff of the pattern called ballerina.  It's very pretty, particularly with the scalloped edge hem, although it's hard to see in my variegated yarn.  However, it takes 29 stitches as given.  That means a coronet on the front and back and that's all.  I have decided I like the actual coronet pattern which has several nupps in it and that I would like it around a cuff.  However, I wouldn't do the lace in which it is set.  That would give several more repeats of the pattern. 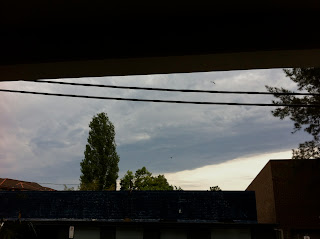 The twisted rib which goes down the leg of that sock pattern is very easy and quite effective.  Just invisible in the variegated yarn.

This top picture was taken on my phone with  two different types of cloud together.  I found it interesting and the iPhone takes quite reasonable cloud pictures usually.  It's certainly quicker to take photos with the phone than to find the big camera and set it up.  By the time it's ready the sky has usually changed.

The week has been stressful for the family.  Middle son has been working very hard to get his house ready for sale.  It's been a big effort.  They had a lot of "stuff."  Don't we all sometimes?  However, it's been cleared out and repainted right through.  However the effort and a new job learning situation has tired him out.  He's been getting four, perhaps five hours a night sleep  for several weeks.  The house is now on the market and they've found one they would really like in the next suburb up.  It went to auction last Saturday but son could not bid as bank did not have papers ready.  It was passed in with no bids except one from the vendor, so son is pushing bank so they can make an offer.  It's in the suburb where all the children will be at the same school next year.  This will mean no before and after school daycare will be needed and the school's sliding fee structure will use the care money saved and will cover the extra two girls' tuition.

So if anyone wants a starter home in the western suburbs, have look  here.  Its just too small for them but is in the quiet end of a pleasant cul-de-sac with good neighbours. 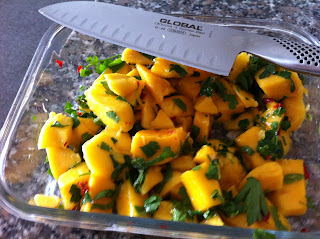 I've been experimenting a bit with some different salads.  This one has been good in the warm weather. There were three large, good mangos in my fruit and  vegetable box.  I've chopped them into cubes, sort of, added some chilli, mint, parsley and juiced a lime over the lot.  I could have put more mint in as a contrast and lemon would be good if you didn't have a lime.

It's very refreshing and I finished it off tonight with some hot chicken.  The two went well together. 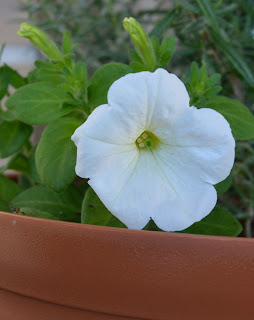 I've also been experimenting with using the manual setting only on my big camera.  I like the petunia, it's so white.  This photo turned out OK but some weren't to my satisfaction at all.

Edited:  I wasn't happy with what I had written.  Suffice to say that some family relationships are under great strain and several of us are very stressed.
Posted by Jan at 8:23 pm

Hope the bank comes through quickly for M and his family.

If I liked mango, I would be eating that salad like a shot!! Maybe I should be trying watermelon?? Perhaps it is karma and your son is meant to have the new house?? Fingers crossed. I hope things are sorted out and the stress levels go down soon. We have had strange clouds here too. Must be the weather.
Glad you are OK.