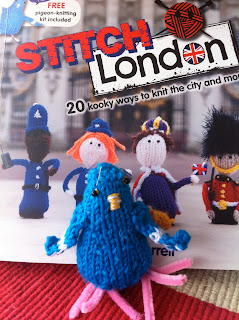 I realised that I spoke  about this book but didn't actually show it in my last post.  This was given me by my sister, bought from a bookshop closing  down in Windsor.  There are lots of different animals and people in it and I think some of the patterns could well be adapted to other characters too.

I've been busy with lots of things and haven't done much, either blogging or knitting.

I went up the coast yesterday for a haircut.  DIL still insists  she will do my hair and I really like the way she does it.  So I'm playing each visit carefully to see how things go.  It was OK yesterday, she seemed almost as usual.  We both kept the conversation  fairly general and all seemed well.  I'll take each visit as it comes.  The next will still be in school holidays so I guess that she will be OK.

My son has moved into his own place now and a load seems  to have lifted from his shoulders.  It's a smallish townhouse but it has a large garage which he will use as a study.  He has mattresses for his children but will buy bunks for them.  Currently they are on the floor when they visit.  I went round there after the haircut and the children went too as their mother is booked for Christmas haircuts all weekend.  They seem to be coping at the moment and enjoy being with their dad.

The place is a bit dated but adequate.  It's about two minutes to walk to the nearest large shopping centre and it takes him  about five minutes to get to the station.  Took me longer, but then, his legs are much longer than mine!

He seems to be OK.  He's speaking clearly and confidently and making plans.  I  think he's better off away from the tension she was causing and several other distinctly unpleasant episodes have also  emerged.  For a while there I felt as if I had fallen into a smelly, slimy duckpond.  He admits many mistakes on his part but she just says she couldn't stay with him any  longer.  That's it.  No discussion at all will be entered into.  Obviously, other factors were there also.  He's eating properly again instead of just picking irregularly at food.  He's up in the morning and off to work instead of sleeping unless someone woke him.  I'm sure there may be some bad days, but it's encouraging to see his progress and the medication is kicking in too.

Along with the  book  above, my sister gave me this little glass tree which is very delicate.  The baubles are also glass and came with the tree.  It stands with my Nativity set  and my Christmas  angel mum gave me "for your Christmases to come"  not long before her death.  A mix of traditions of different origins but I can live with that.  I put my decorations up late and take them down early too.  Tomorrow is the last Sunday in Advent, the beginning of the year in the church calendar.  My mother followed the no decorations till after tomorrow, as her mother had done.  I've been a little bit early.  I find following the calendar like this is an ordered way of working through the year and it suits me.  Nothing slavish, just some  structure to life.  I'll take them down at Epiphany, otherwise known as Twelfth Night, January 6th. 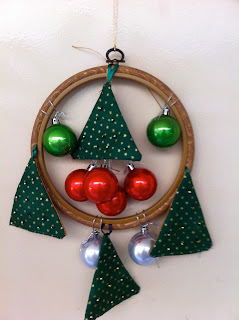 Several places here have had Christmas wreaths on the door for a long time.  I went hunting for the Christmas themed fat quarters I bought at Hornsby when I still lived at Killara.  That's two moves and a lot of water under the bridge since then.  It took me ages to find but I eventually unearthed them.  I also unearthed some Christmas beading and embroidery which I had bought at the Crewel Gobelin in Killara.  I finally recognised I was never going to do them so have passed them on.   It didn't take long to make and it's certainly unique to the doors here.

I have started the Hawthorne shawl which was gifted to me in a Ravelry group.  I haven't done much, the rows are long and I want to be fairly sure I will not be interrupted during the row.  The shawl starts from the bottom edge and decreases in the lace for shaping  and there are then short rows to further shape the body of the shawl.

I will be at #1 son's on Boxing Day and so will DIL's  brother and family from Darwin.  I think I will be quietly at home on Christmas Day for lunch and I'm perfectly OK with that too.  I was last year.  Prawns and some spicy sauce, I think.  We've had our main family gathering and it's been pleasant basically avoiding the shops.

I hope to update again but  will offer my Christmas greetings to all just in case I don't.

So glad to hear that T. is doing well - great news!

I have been remiss in all the craziness of going away for mum's cataract operation then having 40+ people here for "lunch" (some stayed till past 8pm) last Sunday -- I haven't thanked you for the little parcel which arrived safely while I was away; sorry! I do appreciate you thinking of me.

Christmas Day will be quiet here -SIL has to work both 25th and 26th so we won't be having Christmas until 29th; there will be eleven of us for that! I haven't braved the craziness yet - I will have to do it on Monday! At least for supplies to see us through the two public holidays! K-Mart is open 24 hours here so I will do my last-minute Christmas present shopping early Monday morning! Can't bring myself to shop on Sundays unless I have to!

Traditionally we put our "live" tree up on Christmas Eve and take it down on 6th January but because of the party last weekend it has been up for a week already. It may have to come down early - it depends on how much it is shedding by 1st January!

Wishing you a happy and holy Christmas and God's richest blessings for 2013.

I am so happy to hear that your son is doing much better. In time it will get better everyday. I hope you enjoy your day tomorrow with prawns and spicy sauce - sounds lovely.