the slide down to Christmas 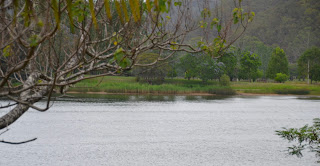 Almost Christmas but we've had our family lunch.  It was last Sunday and was the only day we could all agree on, so it was very early this year.  I think there was vague agreement made about the date for next year, but come late October, I'm sure no one will remember what it was.

The day went off fairly well although my poor  son was a total bundle of nerves about DIL's reaction.  I really hoped she had more sense than to be the drama queen at such a gathering, and thank goodness I was right.  This photo is a similar property up the river.  Clearer view by clicking on any image. 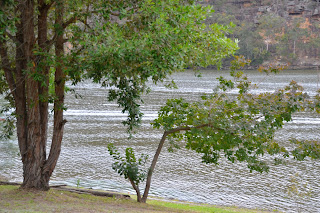 My niece and her partner have just bought a weekender only half an hour from their place.  It's on the Hawkesbury River out of Wiseman's Ferry and was bought because it has an approved and licensed boat ramp.  No  more will be allowed on the river..  Now I thought I knew the area but I'd never heard of Leets Vale.  It's over the river, up and over a mountain heading back to Windsor, down the other side and along the river bank back towards the ferry.  All dirt road, heavily corrugated. 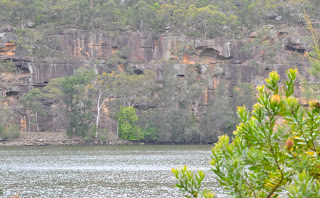 Friend and I found it with less trouble than we had anticipated.  We turned into the gateway and were impressed.  Some of the few houses there are cramped but this was ideal.  It's directly on the river  and is an older style house set on five  acres of well maintained park like area.  Lots of sheds etc.  The house is old and has been added to in bits but is quite comfortable.  Lots of seats to watch the birds, sit in the sun/shade, watch the river, relax under a huge old tree.  This is taken with zoom across the river. 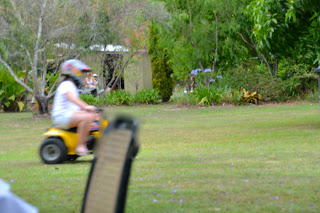 Niece's partner had his six year old daughter there and she slotted in comfortably to the group.  The place came with new tractor, three new beds with mattresses still in plastic, one large quad bike and two smaller.  There were several helmets available and it took about thirty seconds  for them to all learn to drive.  Fortunately these were fairly quiet and the area was large and flat.   The kids had a ball zooming around.  There were enough lifejackets for a  trip in the motor boat but a  change came over and there was a thunder storm.  All the photos here were taken in the rain.  Tables for lunch had been set up under big trees but we eventually had to give in and shift lunch to a  covered open area.  This is Miss 8, a poor shot taken in great haste in the rain.

Among gifts from my sister was this book, Stitch London.  She bought it in an old bookshop in Windsor which was closing  down and paid very little for it.  The critter leaning against the book came from a kit in the book and was called Cooey the London pigeon.  The yarn was acrylic, so the wings won't block but flip at the ends, a bit like a 70's hairstyle.  All sorts of different pieces in it, although I doubt how many I will make.

What I will make is Hawthorne in some Lana Gatto 10 ply merino.  The pattern was a Christmas gift from a member of a Ravelry group and am looking forward to it. It's from Twist Collective and I like many of their designs.  It is knitted from lace edge back, decreasing and using short rows to curve the shawl.
Posted by Jan at 2:58 pm

What a gorgeous holiday place! I'm glad you all had a good time and DIL didn't cause any dramas!

It sounds as though you had a wonderful xmas celebration at a very beautiful place. I hope that your son is coping with all his medical stresses. I suffer from depression and anxiety too so I know how overcome he must feel with it all. Sending you lots of hugs and hope that things improve for your family.