It came as a bit of  a shock to me to see that I actually hadn't written down any of the posts that have been swirling in my mind for the last couple of weeks.  I blame it on the heat, of course.  The fires of course have been and still are dreadful.  The damage is mind boggling and they still go on.  DIL was to go camping in early new year with children in a group which goes every year to Kangaroo Valley.  RFS suggested they go home.  That area is untouched but I can understand RFS concerns for lots of tents and children. 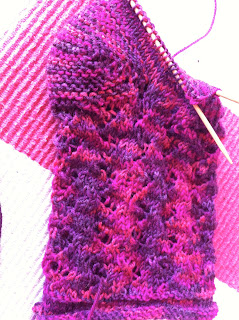 This is the first sock for a KAL I'm doing.  No set number of socks, just  report monthly.  The yarn is sports weight, so it's cosy.  The colours don't suit the pattern, called crosshatch, but I'm not ripping it out now. The pattern is in More Sensational knitted Socks by Charlene Scurch.

I have started the  second sock and am partway down the leg.  I'm not really happy with it because the pattern does not show, but I'll persevere having done one sock.  My feet will appreciate the sock, not the pattern.  Hopefully I'll learn from this and be more selective for both yarn and pattern next time.

I've seen some attractive patterns called after some of the characters in Terry Pratchett's Discworld series.  That would be different.  I'm sure my youngest son would appreciate some, but his foot is very wide and he takes a size 14 shoe.  Handknit socks for him don't have much appeal to me. 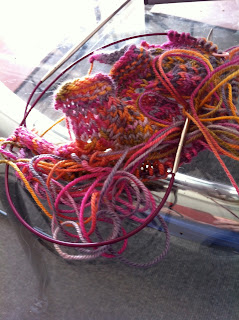 My little Roomba vacuum robot does a very good job provided I spend a couple of minutes checking before I turn it on.  The sofa bed in the spare room is just high enough for the unit to wedge tightly underneath.  It fights hard but finally gives up and sits sulking till I rescue it.  Now I put something across that edge.  I also check there's nothing on the floor to tangle in the brushes.  There is a long brush which as it revolves, sweeps dirt into the main container.  There are also three brushes around a circle on the edge of the cleaner.  These go at great speed and whisk in bits of fluff, crumbs etc.

I  realised I hadn't heard the cleaner for several minutes and checked.  This mess had been the right hand yoke from the Low Tide jacket/vest I had started.  I had put the yarn in  a tall jug because it kept bouncing all over the floor.  The knitting had been resting out of harm's way on the top of the jug.  I think the cleaner bumped the jug and the knitting fell.  It took over 20  minutes to untangle from both sets of brushes and a further 30 minutes to actually rip the knitting back and re-wind the yarn.  I wasn't going to pitch it.  It didn't seem to have picked up any dirt and it is the 50/50 merino/silk which Knitabulous used to sell till she could obtain no more. 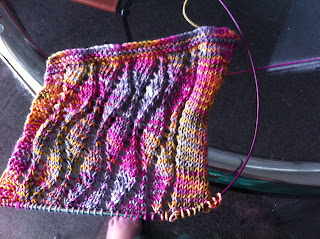 Here's the knitting redone.  This is just over half the right hand front yoke, centre front at left of picture.  The pattern makes the bias of the knitting and left yoke will mirror it.  Back yoke is also patterned and then stitches are picked up for the body of the vest.  In a way, I was glad I had to redo this as I found I had totally misread the pattern in one  spot.

The garter stitch at top is 3.25 mm needles and the body is 3.5 mm.  I like the feel of the fabric but am not looking forward to knitting the length of the vest  which is quite long, in stocking stitch at that gauge.

Colours are a bit dark.  It's mid afternoon but the cloud cover is heavy. My brother on the North Shore had a  good storm yesterday, as did my sister who is housesitting on Central Coast.  We have just had cloud here. 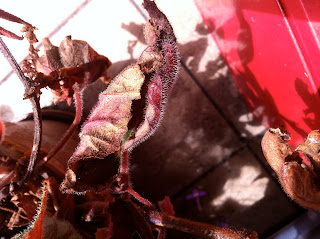 Yesterday in the heat I had Miss 12 and her brother,7, here with DIL, the wife of eldest son.  She had been world's best auntie to them since last weekend.  The kids needed a break and some pampering after the dramas of the last couple of months and she really enjoys children.  They've been a bit spoilt but she's also had them out swimming, eating Chinese dumplings etc and generally having a good time.  My son picks them up tonight as this is his weekend for them.  We knew it would be hot so I made sure I had rolls, salad etc.  I found I had a bottle of the Cascade raspberry cordial in the pantry so got that out.  Shut blinds and windows and turned fan on.

They were here most of the day till the late afternoon.  They arrived early needing breakfast as they had already been at the beach for a couple of hours early in the morning.  She brought that with her.  They played around and were quite good considering the temperature.  It was bearable inside but Mum's begonia suffered despite lots of water.  I think I should have put an umbrella over it. 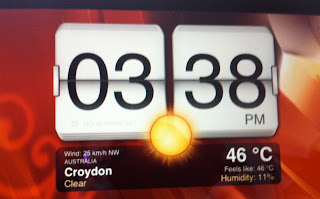 As they went out my door, it was hard to believe just how hot it was.  The heat hit them as they stepped outside and  the door handle on my front door was hot to the touch.  I came back in and looked at the NightStand app on my iPad.  I thought there was a mistake, so I turned it off and tried again.  No mistake.  I am near the water, I could walk to Parramatta River in 20 minutes or so and can see the Bridge  and harbour from the roof.  There's always a lovely breeze in the afternoon but nothing yesterday.  Just look at the humidity.  Terrible for the fires anywhere but the heat would have been much more unbearable had it been higher.  I don't think I've ever seen it so low.

It was amazingly hot, that's for sure! Funnily enough, mucus sinuses were even worse in the low humidity!

I'm glad you found your knitting when you did, I hate to think what it might have looked like and the cleaner continued eating it! It looks lovely now you've got it looking like knitting again!

You must have a fantastic little vacuum. I hope the knitting was still okay after the incident. I am glad that your daughter didnt go camping, too much to worry about having kids camping near fires, much safer at home. It has been hot here too, although we only had 1 horrible day like that so far. I really cant wait for autumn to arrive.

Oh, so many things, but I am sorry I did laugh that your vacuum ate your knitting. You showed great restraint and patience unravelling it!! Lots of stocking stitch doesn't excite me either.
Reading that your door handle was hot is so frightening, the weather is definitely hotter now, and for longer periods of time.
I hope it is cooler and the fires are rained on soon.

Treebee says; strange to read about your incredible dry heat. We've had over a week of snow. We're going str crazy as its so difficult to travel

Good to hear from you, Treebee. A year since you were out here!