a little bit of history

Here's a blast from the past for me.  I was quite young, probably about five, when an aluminium baking set was given to me.

The pieces were quite usable, they weren't toys.    This small frying pan has an insert for an egg poacher inside and I think the lid also fitted a saucepan, although I am not sure what happened to that.  There was a very good measuring cup for baking.  Mum always kept that in her big tin of flour, so it was ready for the large amount of baking she did.  She made many slices, biscuits and cakes each week and all were gobbled up. She was also an adventurous cook for the age, using ingredients like smoked cod, garlic and capsicum.  My school friends were impressed as they had never seen such ingredients.

There was a saucepan, smaller in diameter than this that Mum used for either boiling eggs or cooking peas for dinner.  My present, but the family had a lot of use from it.  Unfortunately, Mum ruined that saucepan.  She put eggs on to boil hard for something and went outside.  She started to talk  to the neighbour over the fence, and when she came back in, the eggs had boiled dry and were smoking.  The bakelite handle was ruined and the saucepan base was badly buckled.  I can remember being very upset about this for a long time.  I imagine she was also upset too.  The last piece was an oldfashioned shaped rectangular pie dish which I have somewhere in the cupboard. 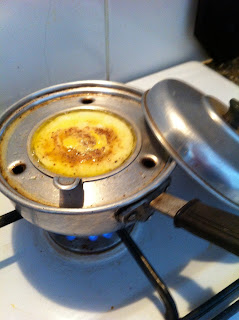 I decided to cook an egg for my lunch today.  I don't have them often and they need to be just right.  I hate the smell of raw egg on my hands or in any containers and I can't cope with egg flips.

If I fry an egg, I put it on before anyone else's.  I let it set, then I flip it and break the yolk.  I do this constantly till everyone else's is cooked, then I take mine out with a very hard yolk.  Runny egg yolk makes my stomach churn and I would be no use on some of the cooking shows lately where the egg had to be runny.

So here's my lunch egg, cooked with freshly ground pepper on top.  It went on a slice of multi-grain toast and was pleasant  change.

A bit of fruit rounded off the meal. 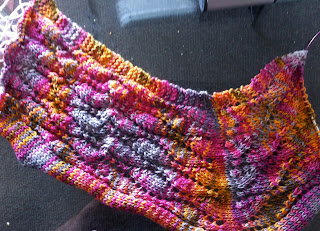 My son is bringing the children down by train this afternoon and many of the family are going to Mario's the local pizzeria here.  He has people come from Sutherland Shire and Blue Mountains, does Italian food as well as pizzas.  Bookings necessary on Friday nights and at weekends or there will be no room.   We've been going since he started, probably over twenty years, now.  Son is settling in to living by himself, although he has the children quite often.  His life is currently complicated by a complete restructure at work in a large decentralised government department.  Lots of jobs have been eliminated. His job has been upgraded and he will have to re-apply for it.  However, he's been doing it for some time now and he and his boss are a good team.  He doesn't see problems but really wants the uncertainty of all this to be gone.  It's something he can do without.

The set of pots and pans sounds very familiar, I think I remember my nan having some. I like a runny yolk, not too runny. I like the outside to e cooked and the centre to be runny. I can't always at eggs though, sometimes I can't bear the thought of them. I hope your son's job is sorted out successfully, you really need to have one part of your life that is going well I think.

I think my sister had a similar set of pots and pans --they were used only for play thought, mostly in the sandpit which we had in winter months -- in summer it was the base of the swimming pool!

Hope your sons work situation works out soon. I love Italian food; maybe we can meet for a meal some time?