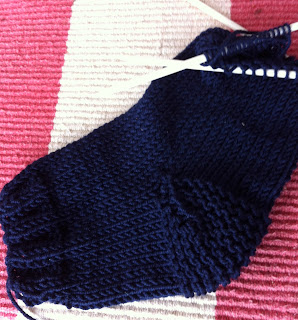 After the last painfully slow pair of sock, I wanted some quick gratification.  My western suburbs grandchildren all wear bedsocks in winter, although they are definitely not my thing at all.  So I decided on some.  I put  down originally for only one pair of socks in the KAL, knowing I  would actually do more but not wanting the pressure.

The sock in the picture is now finished and I'm almost down to the heel in the second sock.  8 ply yarn and larger needles have made this a very quick knit.  The yarn is Harmony, from my stash.  It's a Bendigo yarn, cashmere, merino and microfibre.  The shawls I have from this were pleasant to knit and are easy to wear and I am using a couple of balls I found.  This is for the youngest of the three.  I can guess at her size.  I'll make tube socks for her older brother and sister which should be fine as bed socks.  I don't know if the other two wear bedsocks, so will need to ask.

My friend and I went to see les misérables last week. DIL had been given a voucher for two free tickets at any cinema except gold class, IMAX and Dendy lounge for any showing at all except a Saturday evening. However, she had seen it already and knew we wanted to go.  So we went for free.

We both enjoyed it.  I had seen mixed reviews, some loved it, some hated it, some could not make any sense of it and so on.  I loved it as did my friend.  Some had said the plot was thin.  There is a thread through it, but there are several story lines together.  Hugo's novel is not the easiest of novels to read.  Not only are there various episodes but he frequently goes off into pages and pages of commentary on poverty, justice etc.  Nothing like that in the film, although the visual impact serves much the same purpose.

It's a musical, the film of a musical.  I loved the music although some found it dreary.  Ann Hathaway playing Fantine had a fantastic voice which was used to great effect  as she sang of her dream, destined to be smashed.  Hugh Jackman was good too although some of his notes were a bit hit and miss at dramatic moments.  Russell Crowe made an ideal Javert, brooding moodily over the convicts and asserting his authority through the film.  However, his singing was dreadful for the most part.  Acting fine, singing bad. Sacha Baron Cohen and Helena Bonham Carter made wonderful swindling innkeepers, a far cry from Miss Eizabeth Bennett the Queen in The King's Speech .  Thanks for correcting my senior moment, Cindy.  What stuck in my mind was that it was a role , very ladylike, unlike in this film.

There were scenes of poverty and injustice.  There were moments of camaraderie and bravery.  Hugo said his novel moved from evil to good.  The film shows this as Valjean (Jackman) is arrested for stealing the church silver but forgiven by the saintly Bishop.  He moves through life making amends for his actions.  He is shadowed by Javert who is eventually shown grace by Valjean.  He too is caught up with his past and finally commits suicide, unable to accept and deal with the grace and forgiveness offered him. There are sad scenes and scenes of triumph, scenes of joy and of slaughter.  I was told to have plenty of tissues.  I didn't need them at all.  Perhaps this was because I knew the story.

I must download the book -- I can't remember the ending at all! I want to see the movie while its still on the big screen!

It is a tome of a book but it is a wonderful story and so sad and happy at the same time. Was Russell better or worse than Pierce Brosnan in Mamma Mia?? I have the stage soundtrack but haven't listened to it for yours. I am glad you had a good time!! Was Helena ever Lizzy, I don't remember her being in P&P?
Oh 8ply socks are so quick, what a good instant gratification knit!!