I made some beetroot chutney a few days ago.  I bought raisins, which I really like to add to the chutney.  I would normally buy a brand product, but thought that generic would probably be OK in chutney.  Some generic products are good, others I have bought once and never again. 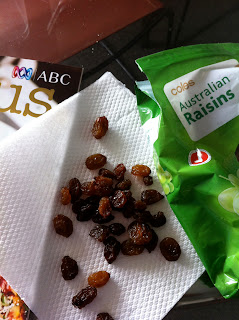 You can see the pack clearly calls them raisins.   They are sultanas, pale and small, not big and plump.  They taste identical to the sultanas in the small snack boxes which many children take to school.  Exceedingly sweet but very little other flavour at all. Another product to get the dearer purchase.

The chutney itself was good, although I winged it on the recipe.  Most I could find had beetroot and apples.  I had used the apples intended for the chutney by the time I got around to making it.  I had eggplants and one sorry looking zucchini.  I baked the beetroot and eggplant, chopped them up with onion and the zucchini.  Added in some sugar and vinegar till it tasted about right, the so-called raisins, some spices, a  bit of curry powder and some vinegar and cooked it all up for a while.  I like vinegar but thought that it may be a bit too sour for some, so at the last minute I added some chopped dates and cooked it a while longer.  I put it in a variety of bottles and sealed them.  It was well received  on the pickled pork sandwiches I took to Bowral last weekend.  I've used some with some sausages.

I've just stopped anonymous comments and removed the word verification as  a trial.  I hate the words and have trouble reading them, but have had quite a lot of spam lately sneaking through.  When I looked in the blog's spam folder there were nearly 5,000 spam comments dating back about six months.  I spent a while deleting them in large blocks and hopefully the problem is now fixed. At least until other nuisances find a way around or through. 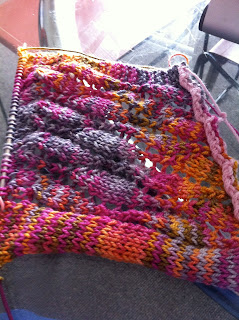 I'm still working on the yoke for the Low tide cardigan. (Rav link).  I've done both front yokes and am starting on the back.  Well, I'm forty rows through one side of it.  The bias is deliberate, the yoke slopes downward and stitches are picked up and knitted for the body.  Even on the back, each side is done separately.  The rolled edge with pink yarn is actually centre back and was the bottom  cast on row of the knitting.  When the other thirty rows are done, I undo the pink provisional cast on and do the other side of the back yoke.  It all then is supposed to be wet blocked before putting it together and starting on the body of the cardigan.  Small cap sleeves are the last bit of the puzzle to be added.  Not a construction method I've come across.  I'm persevering with it, a bit as I had to when I first started knitting socks.  Follow the instructions, it will all work out in the end.
Posted by Jan at 10:20 pm

Love the colours in the cardigan. it's fun watching you cook! Hope the lack of anonymous comments helps!

I have found that even some of the more expensive raisins are sultana like. Well done on your inventive chutney!! Your knitting looks lovely and the construction sounds very interesting and unusual. Sometimes I need to challenge myself to try new things. I remember my first socks and trusting in the pattern!!