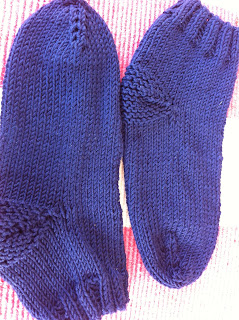 I set myself a commitment of only one pair of socks in the KAL.  Here is the second pair!  Easy and quick, they are bedsocks for Miss 8.  They are in Bendigo Harmony which is probably not hard wearing enough for ordinary socks but which should be  soft and comfortable for bedsocks.

I'll make some for her siblings but tubes as I don't know current sizes.  Also some for the cousins, it wouldn't do to have anyone feeling left out.

I've finished the front yoke on my lowtide jacket and have started the back.  It is going to be a shock to the system when I pick up the stitches to work down.  At least a couple of hundred stitches where I've been working with forty two.

I put in an order for fruit and vegetables forgetting that now I have to choose delivery day instead of having delivery set by suburb.  Mine came  today but early afternoon where I usually have it on a Tuesday before 9:00 am.  I didn't get out to buy meat, in fact there's been next to none in the house for several days now. So what was for dinner?  I had fresh eggs but didn't fancy anything from them.  So I made an old standby - tuna pinwheels, swirls, twirls, whatever.  These are  easy and economical and the concept can be followed but with a change in ingredients.  This is made with scone dough.  Now I've been making scones since I was about 8.  I was taught a very basic recipe of two cups SR flour, a pinch of salt, enough milk to make a dough, probably 3/4 cup.  No sugar, no egg, no kneading just mixing with a flat bladed knife.  I do now occasionally rub in some butter as I did today or even add some melted butter. 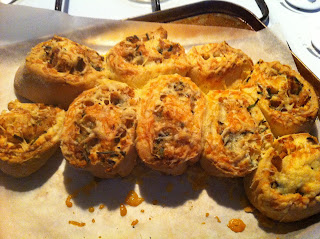 I opened one of the tiny tins of Sirena tuna.  They are much nicer than the cheaper brands and while they cost a bit over $2 and the others are around $1, the difference in quality is amazing.  Really, at $2 for a meal, that's still cheap.  I mixed the tuna with a lot of chopped chives, a squeeze of lemon juice and enough mayonnaise to form a spreadable mix.  Pat dough into a rectangle, spread with tuna.  Roll up along the long side loosely and cut into even slices.  Place these flat on a try on baking paper and sprinkle with grated cheese.  Cook till cheese is melted and brown.  I'd normally do scones at a fairly high temperature but my oven is not only fan forced but the element which I had to replace is now fairly savage, so I cooked these at 170° C.  Some salad and I have both dinner and lunch tomorrow.

This is an adaptable recipe.  I've used pastry, or pizza dough or scone dough.  Tuna is always good or leftover bolognaise mix or other leftovers in the fridge.  Chop them up small and add some form of sauce or mayonnaise.  Perhaps some herbs or flavourful sprinkles.  Minced pork goes well as does other mince flavours. A great way to use bits and pieces and to make what seems to be an entirely new dish.

They were good for the day.  It hasn't rained here today but has been much cooler and very grey.  There was a spectacular storm here last night although my area missed  a lot of heavy rain.  There was however a very vivid son et lumière show for at least an hour. 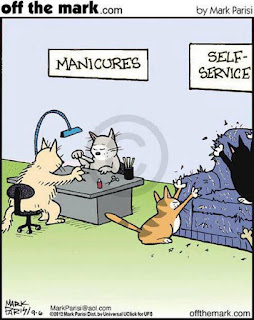 Finally, just because it made me laugh.  Something for anyone with cats.

Those bed socks look soft and warm. My recipe is for cheese and bacon! Sometime with Italian herbs. Love seafood, don't like tuna! Maybe because when we first got married it was all we could afford so seated it a lot!

Sprinkles of rain here around lunch time but very grey all day! The cat cartoon is very funny but if our cat tried it .... Goodbye cat!

I know cats who do that!! 8ply socks are like a knitting miracle they are so fats. That's a nice colour and a cute pattern!! I know that what's for dinner feeling. Sometimes I make up things like that. I quite like some eggs, ricotta, cheese and vegetables made into a kind of fritatta. That's quick. Oh and mock fish cakes!! Your scrolls look yummy, I have zucchini slice in the freezer for a meal emergency.