these are a few of my favourite things 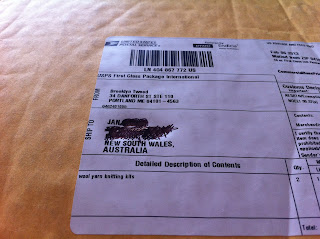 Oh look!  A package from the USA!  I've been expecting it for at least a week now and it's over three weeks now since email was sent saying it had been despatched.   Just arrived. I don't know which end of the journey was so slow but from past experience, it could well be American post.

Brooklyn Tweed sent me a parcel.  A soft squishy parcel.  Well actually I did know it was coming.  I bought some stuff one day when the AUD dollar was fairly high.  Well, that's my excuse.

It was quite a large parcel and I opened it carefully just in case the yarn was near the edge where I used the scissors.  Very carefully indeed. 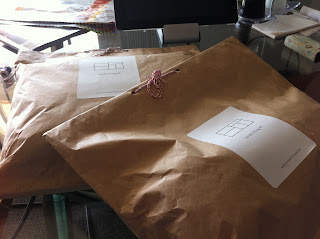 Ooh, a few of my favourite things.  Brown paper packages tied up with string.  One large, one smaller.

I carefully tugged at the strings and managed to get the packages undone without cutting the string.

I peered inside but the yarn was also wrapped in brown paper so I couldn't see it immediately. These were just wrapped, not wrapped and tied. 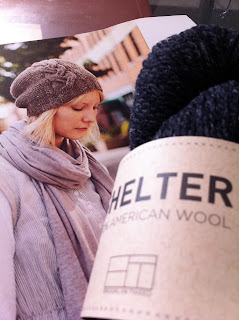 This is called Rosebud and the colour of the Shelter yarn is aptly called cast iron.  In real life the colour reminds me of the top of the old wood stove I cooked on on holidays.  It's dark, but there is a sheen to it.  Very much cast iron. 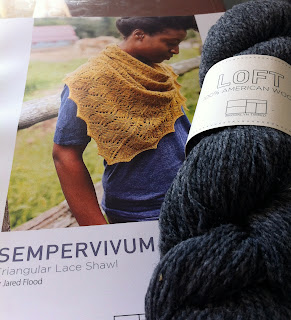 It feels as if it should be very warm.  Son and DIL  plan on being OS in continental winter so I think this may be made for then.  I have things to finish before I start this, but that's OK as far as time frame goes.

The other is a shawl with patterning on both right and wrong sides of the knitting.  A bit of a challenge but I have done lace with double sided patterning before.  I'll just have to keep my wits about me and be careful to mark where I am up to.  Will also have to remember to read the back row of the chart in the proper direction or pattern won't show.

The colour here is called soot.  I must have been feeling moody when I bought these to have chosen two dark colours.

I was a bit of a write off yesterday.  On Tuesday night I attended the AGM for this apartment block.  There have been a few hassles with tenants here lately and I had a huge box of party rubbish dumped in my parking space.  Why they couldn't move it a few more metres to garbage room is beyond me.  So I went to the AGM as I wanted to hear decisions and discussions first hand.

It was held in a local club about 20 minutes' walk from here.  6:30, which was an inconvenient time as far as I was concerned.  Too early for dinner and too late the other end.  I walked up and didn't even have to sign in on arrival.  However the place was being renovated and there was a horrible pungent smell pervading the whole area.  Paint strippers or thinner, varnish or perhaps even the new carpet.  It was vile.  I get few migraines but such smells are an almost certain trigger.

Sure enough, I had barely sat down when the familiar signs became apparent.  After a while I wondered if I would be able to remain sitting or if I would fall off my chair.  I decided I had to stay.  I could get a ride home at the end which I would not get if I left early.  Either I became used to it or it quietened down but I stayed for the two hours without embarrassing myself by falling off chair or fainting.

However, even after a sleep I felt terrible yesterday.  Nauseous and extremely sensitive to light.  I got up needing coffee to find my coffee machine had died.  The lights are all on but there's no action.  I eventually bought a cup at McD's downstairs and felt better after it.  However, I was pretty much out of it till mid afternoon and had several rests in bed.

I get few migraines, perhaps one a year and not even that frequently lately, but I certainly don't want another.


Edited to add:  User error, user error with coffee machine.  I had somehow changed one of the settings and machine didn't like it.  It now works, thank goodness.  User error is computer guru son's favourite refrain.  Often it's not applicable with DIL or me.  Perhaps others.  This time I will have to plead guilty.

Sounds like the bad sinus type migraines I get, so can sympathise.
Coffee definitely helps, glad your machine is working

Was it worth it? Did you sort out the problems with the other tenants?

PS waiting on a package myself, only from QLD. Hoping would only be a day or 2 but seems not. Spoilt myself big time but at over 50% off and only $5 postage for 900g of yarn. Why not, can always resell if don't use and possibly make a profit. Well that was my Justification. Hint lots of lace coming up

The Shelter yarn looks beautiful. I have heard the loft can break quite easily, but I would love to try some out. The colors you chose are beautiful. Maybe the package was delayed due to all the snow they have been getting over there in some parts. I hope the tenant's removed their rubbish, it really annoys me if neighbours do things like that too, pure laziness. Hope your migraine went away, and so happy the coffee machine works again.

Oh shelter,Ive been wanting to try it for a while,a hat for me or a wrap and a jumper for Hubby which he prob wont wear due to being a warm person,maybe if I succumb to taking a trip to Albany in winter he mght, I get migraines too and havent worked out what starts them yet

Oooo, I hope there was some resolution to the tenant difficulties by the end of the meeting otherwise you suffered in vain! Hope you're feeling much better now.