I can sing a rainbow too

Lots of colours today and even some knitting!

This looks as if it's quite early but it was just before sunrise, around 6:45 am, looking toward the city skyline.  As the clouds suggest, there has been a bit of rain since, but it's very sunny and humid here now.  We had rain last night around 11:00 pm, but it didn't last long and the night was sticky too. 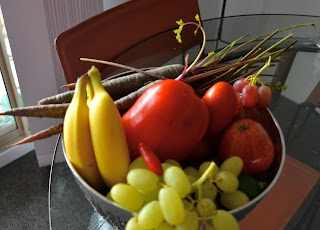 Fruit and vegetable delivery day and I was out of fruit except a lime and a lemon.  Variety of food colour daily is stressed by some nutritionists.  I should be fine.  There's an avocado hiding in there, small red birds eye chillies, bananas, apples, two colours of grapes, red capsicum, purple carrots. two types of tomatoes.  Also more lemons and limes.  I use a lot of them.  Not shown are brown potatoes, sage, sugar peas, fresh beans, bok choy, broccoli, kale, zucchini and rocket and purple onions.

Add in some good olive oil which tastes  wonderful, and the box was fairly full.  I'm going out for lunch down south on Saturday and think I'll make an old fashioned zucchini slice.  I'll buy some bacon and jazz it up with some feta and ricotta.  Here's Donna Hay's adult version of it.  It packs well and is yummy.  There are plenty of other less indulgent recipes on the web too. 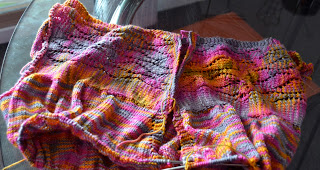 Another rainbow. Now my fingers are feeling better and most of the swelling has gone, I've returned to knitting.  Carefully and in a measured way.  I can hardly do much less.  Fine wool on 3.5 mm needles with several hundred stitches does not make for quick progress.  The neckline is at the top, sleeve stitches and armholes are on waste thread.  The stocking stitch at the bottom s supposed to be 15" long.  I will try it on later and see where that comes to on me.  I'm fairly short, the shortest in the family bar one DIL, and if shorter is OK, then I'm not arguing.  It's bunched up on the cable of the circular.  It's still easy to knit but not to spread out for a photo.  The pattern does not say to, but I think I might have to do a hem or some moss stitch n the bottom or the stocking stitch will roll.

After a long period of turmoil and uncertainty, Central Coast son has finally been told he has been made permanent.  It's basically what he has been doing for ages but is a promotion by several grades and work load has changed.  Lots of others were made redundant or just plain sacked.  He's happy but not for them.  He now has six months probation which his brother in the recruitment field warned him of.  He has heard however, that others who had contract positions made permanent have 12 month's probation.  He's been there 8 years and still has this last hurdle.  I think the place is very carefully doing everything by the book and this was the least they could give him.  However, he didn't want to move.  He has a very particular set of IT skills, shared by not many in Australia and he could easily get a  job.  However, he has experienced the joys (not) of over an hour's commute to Sydney.  Newcastle would be the same. Trains are unreliable and often late or missed altogether.  He is door to door in under 30 minutes if al works well together.
Posted by Jan at 12:09 pm

I am so glad your son has (almost) his new job. It sounds as if the probation is a given. It must be relief all round. I know endless tiny stitches can be tiring but the colours in the wool are so gorgeous, it looks lovely.
Yum, the fruit and vegetables look great. I had the most tasty strawberries and cantaloupe today. They tasted the way you imagine they should!!!

Glad to hear that the swelling in your fingers has gone down and that your son has been offered a permanent position.