just what the doctor ordered

As I've said before, it's very slow doing the skirt part of the low tide jacket.  endless stitching which takes time to show any result.  I've been plugging away on it  most days.  Sometimes I  have done only one or two rows, sometimes up to eight in a day.  But it's slow work making an impression on those 15" needed.

Despite the prettiness of Ailsa's yarn and the fact that I really do like the look of the finished article, it's been sapping my enthusiasm. Very much so. 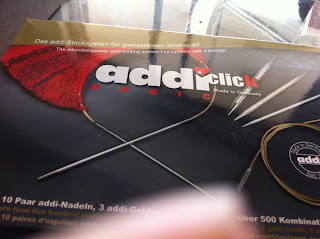 When I saw that Renae at Suzy hausfrau had Addi needles in stock now, I was tempted.  In fact I was tempted for over a week.  Then I thought of her good service and I found that I needed yet another set of Harmony 4 mm.  I succumbed.  I ordered a set on Sunday afternoon a  few days ago and the postman put them into my eager hands at lunchtime on Tuesday from Canberra.  A little bit of retail therapy.

The needles are well packaged in a fairly flat pack and there is a joiner section which can be used if knitting is on a cable.  They clip together easily and I have been enjoying using them.  I've never had problems with either the wood or metal Knitpicks.  My metal set are the original Knitpicks and the Harmony are Knitpro.  I always use the little pin as a lever to tighten the join and I've never had a problem.  However, I do like the Addis. 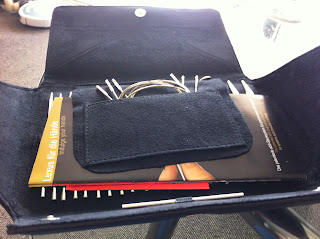 Just by coincidence, cough, cough, I had wound the Brooklyn Tweed Rosebud hat yarn at the weekend. I'll wait till it's finished for a photo as it's very dark, called Cast Iron,  and it's hard to see the detail of the hat on the needles.  I'm not quite halfway through the pattern.

This is done in Shelter.  I would not buy this yarn again but yarn and pattern were a kit.  It is supposedly promoting American wool.  Noro Silk Garden hurts my fingers to knit as it's harsh.  This is almost as bad.  It's very solid and I am surprised it's used as a hat as I wonder about the ribbing being prickly.  This is not something I have problems with as even as a child I liked the feel of a woollen garment on my bare skin.  I'm not sure about this yarn.  When I put the yarn on the swift to wind, I could see broken ends in the skein.  There were three breaks.  In only 140 yards!  I was able to spit splice them but it slowed the winding down as I had to wait for the splice to dry before winding more.  I consider this unacceptable. 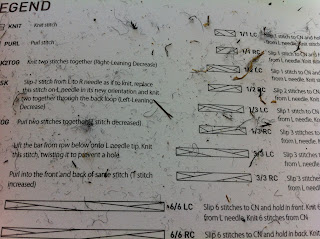 Have a look at the photo.  This amount of foreign matter, plant seeds, bits of jute or hessian cam from about five rows of knitting.  I've been pulling out the burs and seeds and bits of hay etc.  This is a hat and I don't want bits of it actually in my ears.  I bought 8 ply from Nundle Mills about ten years ago which was like this but the yarn was softer.  It was also much cheaper even allowing for increases over the years.  I'll be putting this stuff in my rubbish bag.  I wouldn't want to be germinating weeds from the USA over here.  we have enough of our own. 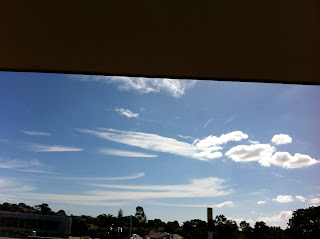 I find this a shame as I like the patterns from there.  I've made others and envied some too.  They are decidedly different to many around, are well written and easy to follow and the finished project looks great.  I'm really disappointed in the yarn. I like this hat and will make the pattern again but probably in some MadTosh Vintage worsted in my stash.

I haven't taken many pictures of the sky lately but this was so beautiful I grabbed my phone and took a couple.  The iPhone does skies well bcause of its colour saturation according to my sons.  An antidote to my grumpiness above.

Also an antidote to sadness.  Snuggles the cat my DIL found as an abandoned kitten in a cemetery in winter 1996, went on her last trip to the vet  today.  Quite old, but many cats are older.  She hadn't been well for a few weeks and the vet wasn't sure of the problem, but she worsened rapidly overnight and my son decided it was another trip he had to make today.  She lived at my place for quite a while with her two sons.  She would sit on the stairs and ambush me through the railing as I walked down the hall.  I found she'd been winding my wool once.  A small ball was  wound around chair legs and from  side to side under the dining table.  My husband used to put his business suit coat across the back of one of the dining chairs.  She often hid under it and would dash out and bite the bum of one of her sons as he ambled past.  She'd be back in hiding before he had even realised what had happened.

My husband used to feed her little treats from his plate, despit my entreaties.  I had friends  over for dinner once when he was away and she stood on her hind legs and clawed the thigh of the person sitting where he usually sat.  He had not given her anything.

One more thing.  Google reader is being shut by Google in a few weeks.  Son recommended Feedly.  It will actually sync with my entries in Google reader so it will save entering things again.  I'm currently using it but will keep looking.  It's OK and I am probably just not accustomed to it as I've used the other for years.
Posted by Jan at 5:23 pm

We have had lovely skies lately and the weather is weird -- March seems hotter than February was!