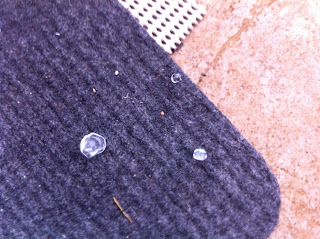 One rosebud which would not have been affected by the massive storm we had late yesterday afternoon.  The rain was torrential for quite a  while here and we had lots of tiny pieces of hail.  This is  my balcony doormat, possibly three metres from front of balcony roof and almost two metres from the side of the roof.  My open lounge room door is behind this and I had more hail blown in even that far.  This is very little,  but it's well under cover.  There was a good deal more outside in the open.  The day was very hot, a ridiculous 32° C.  Not March weather at all and it was still 27° when I went to bed.  Today is hot but cooler than yesterday.  The next week is forecast to be 28° or more all week.

One Rosebud  hat undamaged by hail.  It  is unblocked, I've just sewn in the ends.  I hope blocking will give the cable a bit more definition.  I like the pattern and will make it again.  The small ball is all I had left.  I really wanted to do an extra thirteen rows to make it slouchy, but could tell I would not have enough to finish if i did that. 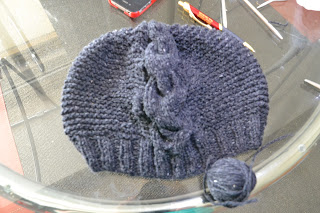 I would never buy the yarn again.  It's Shelter and was sold as a kit with the hat pattern.  I'm really disappointed with it.  The hat is very warm and possibly moisture repellent.  It's thick  and cosy.  However, I have a sore thumb from it, I found it hard to feed through my fingers in knitting as it's coarse and hard.  The coarseness burnt my fingers if I tried to knit fast.  I hated the large bits of organic matter in it.  Seeds, cobblers pegs and more.  I pulled out as much as I could.

The colour is darker than shows in photo.  It's Cast Iron and it really is a cast iron shade, quite dark.  It's hot and sunny here so I'll block it today and hope the cable pops more than now.  The pattern was not difficult but I made a couple of mistakes through inattention.  There's a small cable on either side of the large and at least twice I did the wrong combination at the end.  I dropped stitches  down and fixed it.
Posted by Jan at 11:16 am

It's amazing how the weather can be so different in the same city! We had a few drops of rain -- that's it!

I hope it is much cooler for you. IT is just awful to have such hot temperatures. The lack of sleep is the worst thing of all I think. I hope the cable 'pops' and it is disappointing to find that your wool was so dirty and full of bits.