the times, they are a'changin 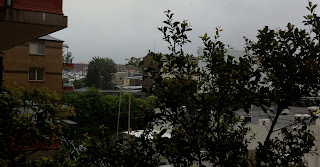 The times are a'changin indeed.  Perhaps not quite as Bob Dylan sang, but it's autumn now.  The first day.While December was very dry we have also had a lot of rain.  And heat.  Too much heat and too hot. It was widespread too, even Tasmania was very hot many times.

For a couple of weeks now there has been a hint of autumn in the air, especially at night when the temperature has been down a little.  I am glad to see the end of summer, even if there may still be some hot days ahead. Today is very soggy and dark.  These pictures were taken about 10:00 am.  The lower picture should have the city skyline visible. 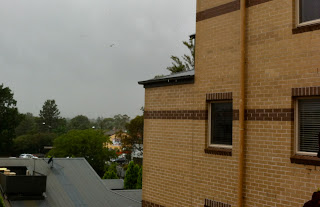 I was at son's place on Central Coast on Tuesday evening and all day Wednesday.  Housesitting.  Waiting in vain for a tradesman to call.  He is quite close to the station, his long legs do the distance in under ten minutes.  However I take longer, especially with poor hips.  The trip up was terrible.  The train was packed and the interurban train's air conditioning was not working, at least in the carriage I was in.  I was on the sunny side of the carriage, the only place I could get a seat.  Because it's normally air conditioned, the windows can't be opened and we sat in a hotbox fanning ourselves with paper, books, whatever came to hand.  There was some trackwork and the train moved at what seemed a walking place from Strathfield to Hornsby, almost half the journey in distance and we arrived fifteen minutes late. It was very hot and very stuffy and when I alighted after an hour of this, I was not sure how much longer I  could have lasted.  I wasn't the only one to feel like that.  I walked to son's rather slowly and sat down in the shopping centre for some minutes to enjoy the cool there.

Son works at a government department which was moved some years ago to the Central Coast.  It's handy for him and easy to get to.  However the new government has done its usual cost cutting and this department has had savage cuts made to it.  He's worked there for almost ten years and should have been made permanent some years ago but has continued on contract.  Many people lost their jobs in the purge and most others had to reapply.  He reapplied as an internal applicant before it was made public and seemed fairly sure of getting the job.  However HR dragged its feet and he came to the last hour of his contract yesterday before it was temporarily extended.  Another three are in similar position.  Checks are still being run because they left the whole process too late.  It seems the job is his, but he won't count it till he has letter of offer in his hand.  His job and the other three are essential to the smooth running of the place behind the scenes.

Unfortunately Fatty O'Barrel's Barry O' Farrell's cuts are wide ranging.  In son's region, an ambulance has been diverted elsewhere which means there is only one available for a widespread area known for nasty accidents on the freeway.

I haven't done much knitting, my fingers have been sore from the humidity.  I haven't even wound more of Ailsa's wool for my Lowtide vest and have only looked longingly at my parcels from Brooklyn Tweed,
Posted by Jan at 11:19 am

Yes, thank you, Tasmania is still going to be hot, 28s and 29 for the next week at least which means 38s and 39s when you are actually under the Sun and our hole in the ozone layer. Lucky you having some Autumn at last. Oh no, I know what you mean about almost expiring fro the heat, I almost did that at my special outing too. I hope your son's job is sorted out once and for all. All the faffing about is just annoying and stressful. Hope your hands settle down soon.

After our cyclone I think we may have lower temps but by golly the humidity is going to kill. I have to mow the school lawns early this week and rake the non turfed areas then refurbish several beds,yuck,still looking for another job

I'm still wondering where summer got to! We had that extraordinary heat in January but February never made it over 32°! However the humidity is playing havoc with my sinuses!