today I show you a mystery...

It's still fairly wet up here in Sydney, although better than it has been.  One advantage is the plants just love real water from the sky as opposed to from a tap.  A couple of the pots on the balcony received rain as it swirled around in the strong winds.  In one corner I have a diplodena or mandevilla.  It goes by both names and is the pink flower at the top of the picture.  The nodding violet came years  ago in a cutting from a holiday house I stayed in.  It's just thriving and I rather liked  this picture.  There is more plant above it with diplodena flowers.

My fingers feel better but I still haven't tested them with knitting.  It got to the point where I took some low dose Voltaren, a last resort indeed for me but  they were very painful, more than an ache, a real pain. I've had arthritis for years and manage it fairly well most times. I live with it.  But occasionally, like the bad hips last September and the hands recently, I have to call in the big guns.  Provided I take the Voltaren after food I can manage three or four days of it.  Taken even just before food, like minutes before, and I have an upset stomach all day.

I'll stop them today and see what happens.  As the humidity lessens,  the pain should ease too. 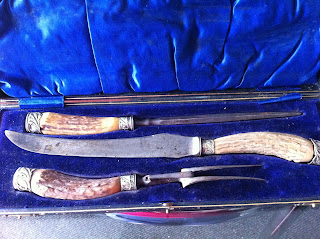 So to the mystery.  I spent one of the wet days going through drawers and cupboards sorting out winter clothes.  I threw out a bagful of old T-shirts and tops which were paint stained, torn, very well worn etc.  I then sorted what was left and put them back in the drawers.  Along the way I found my grandmother's carving set which I always knew I had.  Youngest son, the one now living by himself would love this.  He loves old knives and did not have a carving fork. He is looking forward to this but he'll need to do some cleaning up before use.  Grandma had only bone handled knives with steel blades.  Every knife used at a meal was rubbed on blade with special cleaning powder and then washed.  Woe betide the washer if the blade was ever allowed to touch the water!  The silver was done first in the wash in boiling hot water and had to be dried immediately by the person doing the washing up.

I opened a few other boxes which had silver teaspoon, egg spoons or dessert spoons.  I knew all about those.  The came the surprise.  I opened a similar box but it was embossed on the outside with RRC and 2nd.  It came from Garrards in London which is apparently the oldest jeweller in the world, opening in 1735 although it had traded before that.  Their website is beautiful with a heritage section which looks like a historian's delight. 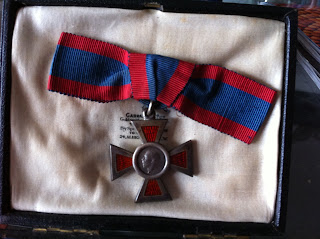 What a surprise.  Inside was a red Maltese Cross.  I do not remember ever having seen such a cross in my life, although it was with things from my grandparents.  I had no idea what the award was so started searching.  I was having a lovely time looking at Maltese Cross pictures and sites but getting nowhere fast.  So I emailed my brother, youngest son and a friend all of whom  had interest in things ceremonial.  In addition son is a superb searcher online. 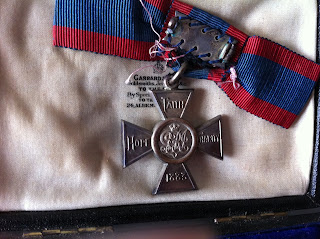 It was my son who came up with the answer.  It is known as the Royal Red Cross.  It was instituted by Queen Victoria in 1883 to be awarded to women only (!!) who had shown exceptional bravery or devotion to duty in nursing in an area of war.  That in itself made it remarkable to me.  To women only!  Men were allowed the award but not till well into twentieth century.

The words Red Cross refer to the colour of the award and not to the organisation of the same name, although  some members have been awarded this.  Here's  picture of the obverse of the cross.  Moving past the slipshod stitching of the award to the ribbon, the words Faith, Hope and Charity can be seen.  Clicking on picture will enlarge it.  Also there is the head of George V and it was this which threw me when I was originally searching.  He was crowned in 1911 but the date shows as 1883 and I could not reconcile this. 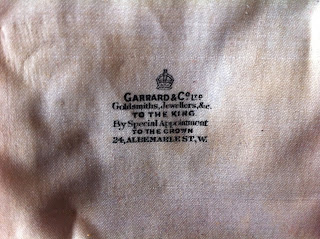 All nestling into the Garrard's box.  I was astounded.  To my knowledge, I had never seen this in my life before.  It is not something to be forgotten.

More to the point...whose was it?  Not only had I not seen it at all before but I can not remember hearing anything about it or any recipient.  I still think it's from my side of the family as it was with other boxes from there, but who was given this?

I did not have the faintest idea where to start.  I could find information about the award, but not recipients.  In the end I asked on a Ravelry forum whose members have shown exceptional skills in sleuthing in another area.  I was given several links and found myself searching the British National Archive at Kew online.  This took ages as the sort function did not work well and I worked my way through forty pages of awards of this cross.  I made a note of all Australian recipients. This was going to be a long search, a needle in a haystack.

However, a couple of days ago I saw another forum was discussing Guiding history and winter camping.   I was not a Guide but knew an elderly woman who had been assoicated with guiding all her life.  In her 80s, she still camped eevry winter at Mt Canobolas at Orange, NSW where it often snowed.  She was made a member of the Order of the British Empire for her service to Guiding.  While I was searching for her, I found a link to a site which details all women Australian recipients of all Imperial Honours.  Pure gold to me.  If you are interested in this type of thing, there are lists of recipients of all  honours, not just this one.

I now have the problem of the name.  As I said, I had heard nothing of this ever.  Back in the Great War 1914-18,  I doubt married women would have been serving.  I've looked up some history of regimental sites and this confirms that.  So I  need to look  for a maiden name.  I realise now that I hadn't heard anything of this from husband's side of the family either.  So I'm at an impasse.  I'm waiting  for my sister to hunt through the family history published  for mum's family.  I will retrieve that for dad's side from my son.  I've emailed two people with a thorough knowledge of my ex-husband's family  going well back into nineteenth century although I think it's from my family.    No names in the list stand out to me.  If it does turn out to belong to their father's side, I'll give it to my sons.

I hope you find the answer to the mystery, how wonderful! I do hope your hands feel better soon, arthritis must be so painful.

Oh what a wonderful find, and what a woman ahead of her time was Victoria to have an award just for women. You are doing such a good job researching, I am sure you will solve the mystery!!

How fascinating! I do hope you manage to find out who won the award and learn her story.

Wow! What an interesting find. I hope you can solve the mystery.