I was thinking about traditions, good and bad.  Old and new.  I tried to lay down some traditions in my family, things like the birthday boy choosing dinner and a special guest.  At Wollombi, we had traditions about lighting fires and life in the bush.  Lots more.

I remembered the opening music from Fiddler on the Roof and found this very non-traditional rendition.  Stop motion Lego.  It's a bit of fun and the music is good with a heavy bass line and great singing.  It's about seven minutes long and I wasn't planning on watching it all,  but  I enjoyed it so much I did watch. 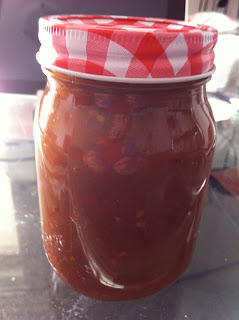 So I have been turning to traditional food lately.  A few months ago, I made my grandmother's banana chutney which is good with cold meats.  Then I made beetroot and eggplant chutney, making up the recipe as I went along.  I had a huge eggplant and more beetroot than I could eat by myself.

I've been hankering after some old fashioned tomato sauce.  I hardly ever touch the commercial stuff around these days but love the homemade variety. Cindy posted  a recipe she had tested so I bought some powdered mustard and made some.  It's good  but I will make a few changes.  I'll use malt vinegar, I can't ever remember grandma having anything else, and I think the flavour's better.  I'll also make sure the cooking apples are tart, mine were a bit sweet.  However, overall it was a success.

I bought the jars in my online order from Coles.  I'd been thinking about protecting the lid from erosion corrosion, drat autocorrect at times,  and then found these lids were two part.  The flat bit is coated on the inside to protect from the vinegar and the outside part screws down and makes a seal.  $3 from Coles.  I'm giving Coles another go.  I used to use them a lot years ago when they were the only online supplier.  I don't think their website is as easy to use as their counterpart's is, but could just be usage.  I've found standards from the other mob have slipped dramatically and getting that acknowledged is long and tedious.  They offered me a credit of $5.76 after an order full of mistakes.  After several phone calls and a couple of very strong emails, they decided I was right, or at least that they didn't want to argue any more and gave me a credit of almost $70.  Worth persisting in my complaint.  So I've changed suppliers, at least for now.  Supermarkets in my area have dropped the home delivery service they used to have and there is no way I can carry heavy stuff home. 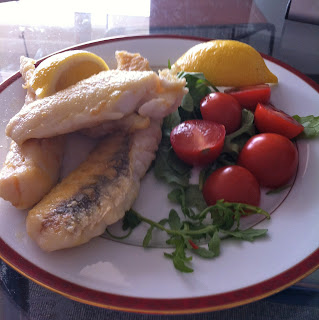 Another of Grandma's traditions was fish on Good Friday.  When I was growing up, Grandma always came for lunch on Good Friday.  My mother pushed the boundaries once and served a BBQ.  She heard about that for a very long time.  I'm not sure why she was so insistent about this particular tradition.  I can trace it in  another ecclesiastical group, but she was Anglican and it wasn't something she ever followed on any other day.

I've been wanting a good fish meal for ages, so decided on fish for lunch yesterday.  I often buy fresh Tasmanian salmon and enjoy it but I was after white fish.  I refuse to buy frozen thawed fish or fish other than Australian, or at a pinch from New Zealand.  I found flathead fillets and bought some.  Fresh, very fresh.  The sales guy said I would enjoy it and he was right.  Flathead is sweet but hard to fillet well.  It was expensive but I had enough for two meals.  Superb.  I had planned on crumbing it and had flour on a plate, an egg whisked in a bowl.  No Panko crumbs and not enough bread to be bothered making my own.  So these were just floured and quickly fried in some good oil.  I'd been planning on asparagus but totally forgot and made the very basic greens with fresh tomato salad.

I'll be on the lookout for some more of this.  I enjoyed it immensely.

Son and two grandchildren are coming for lunch tomorrow.  Baked leg of lamb - another tradition.  I'll put this on early with lemon juice, herbs and garlic and cook it very slowly.  Turned down very low, it can look after itself for a while.  Lots of baked vegetable and all should be well.

He took his children to the Easter Show yesterday, breaking another of Grandma's traditions.  She took me every year but definitely, never on Good  Friday.  Master 7 had not been before and Mis 12 hadn't been for eight or nine years and remembered little.  They had a great time.

We used to buy all the licquorice (grandma again!) show bags and sit in the grandstand.  The licorice was more mellow than it is today and the flavour was different.  We would watch the mounted police displays, munching licorice.  We paid for it the next day, but that was our show tradition.

We didn't go on Good Friday because it wasn't open to the public on Good Friday! We always went on Easter Saturday, rain, hail or shine!

Tomorrow is roast lamb for us too with baked vegetables, followed by Christmas pudding --don't ask me why, it's a family tradition. I think Nanna made too much pudding on year so one got reserved for Easter!

There is something comforting and connecting about family traditions. They seem to be slipping away now, as life is so busy. I have saved and been given a few bottles for my sauce. I agree with you about tart cooking apples- I often eat them. I like the tart taste best.
Our Show is in October, so it's at the other end of the year. We went to the Regatta every year to watch the boats and the slippery pole!! I am glad you had a good time.