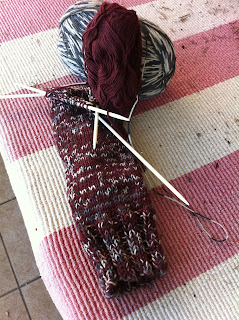 He's hard on socks, but hopefully these will do a couple of years.  Firstly, I'm making them tubular.  He's growing very rapidly at 14 years old and I really don't have any idea just how big to make the socks.  So I thought that if I did tubular socks with a heel, next year they may hopefully still fit him, just a bit shorter in the leg.

Secondly, I'm doing them in Patonyle which as most Australian knitters know is the next closest thing to cast iron.  I know I am happy to wear Patonyle myself, although I also enjoy more luxurious sock yarn.  I throw my Patonyle socks in both the washer and drier and have never had a problem with them after that treatment.

The dark maroon is one of the earlier lots of Patonyle.  When the yarn was discontinued for a while a few years ago, I scored quite a few balls, the smaller 50 gm type, on eBay.  I have another couple of balls in same colour.  The grey and white is some of the new release Patonyle in 100 gm ball.  I'm using two strands and 4 mm needles.  The fabric isn't stiff and they grow fairly quickly when I actually remember to work on them.  Hopefully he won't do as he did with a previous pair of socks when he was younger.  I was presented with a sad sock with pulls in the yarn and several holes and lots of ladders.   He asked if I could mend them.  Well perhaps I could, but it would have taken a long time. He had run around the backyard without shoes or slippers, just socks.  The dog they had then had played with him and had chased him, nipping at his heels and basically destroying the socks. 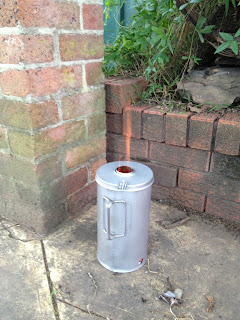 The days here have been beautiful this week after a very cold, windy and wet weekend a few days ago.  I sat on my balcony in the sun  today to work on these.  It was lovely.  Now the sun has moved around it's too chilly to be out there, but the days are lovely.

My eldest son and his wife have had the family collection of slides and the old projector for a long time.  They have spent a lot of time over the last few months scanning the slides into a  digital  format.  Some were past redemption as the projector had eaten the slide when it didn't move through properly.  Some were just plain poor photos.  The other day they gave me a memory stick with almost 700 photos on it, the first selection of what they have done.  My goodness, the memories!

Mum and dad always had a Malleys picnic kettle and water in the car boot, along with a small old globite case.  Remember those?  Like patonyle socks, they were discarded only for a larger one.  They were indestructible. Mine fell out of the train once and suffered no ill effects.  The case contained picnic cups etc and also tea and coffee.  There are pictures of a morning tea stop beside the edge of a country road and the picnic kettle boiling for a hot drink.  He went through two or three of these over the years and my sister thinks the last is possibly at her daughter's.

Middle son was asking about one this week.  They often go on a picnic and camp every year.  I found the Malleys is no longer made.  A copy is made in NZ but costs well over $200.  I was not feeling that generous.  Then I did a search and found this.  It's an eco billy from here.  They aren't cheap either but I think that as Malleys kettle was over $30 and that would be possibly thirty year or more ago, it wasn't too bad.  I bought one for him and on Friday I had an apologetic phone call from the owner of the business.  He could not get to the Post Office till next week as he was exhibiting at the Camping Show.  I put my son in touch with the owner.  Son had already been planning on going, so he found the stall and the kettle was handed over.  Win/win situation for all three of us really.  Son said the owner and his wife were lovely people and it was a pleasure to do business with him.  So, as you can see, kettle has been tested.  A sheet of newspaper, or a handful of dry leaves or twigs is enough to boil the kettle which is double walled. 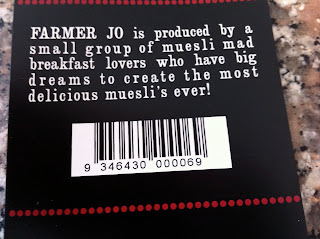 I am totally exasperated with misplaced apostrophes.  This label came with some fancy muesli I bought as a treat from my fruit and vegetable supplier.  Again, another small business making good.  The muesli is really good, but I will use it as a  treat at the weekend  as it's too expensive for every day.  I had burnt fig, almond and cinnamon flavour and it has whole almonds and huge chunks of chewy figs in it.  However, I looked  at the blurb which came with it and  shuddered.  I have emailed the company but not had an answer.  Aaargh!

The weather is superb at the moment -- lovely to be outside (since that's where I spent the whole weekend on hard labour at DD's former home I'm very grateful for it).

I knit my bed socks from 8ply -- much faster!

I've not seen those kettles before -- my mum and dad both got their licenses later in life so for them it was always an airpot! And yes, I remember the cases, WM's is still around here somewhere I think!

WE had a Mother's Day ad in the paper that had been 'edited' to make it more appropriate but it said ' My mum love's ...whatever' NO!!!
Love the bedsocks and I think Patonyle is quite soft as well as hard wearing- no running outside though. Very bad.
I don't know about the camping kettle at all, we didn't camp so we had a Thermos and anodised coloured cups.