No, not the Pratchett book, although I did enjoy the screen adaptation of this last year.  I've been reading Pratchett lately.  I'm currently reading Nation and I read Dodger a couple of weeks ago.  Miss Twelve, who used to be a voracious reader is also reading some of her dad's collection of Pratchett's stories.  She discovered Manga comics and  that's OK to read.  Peer pressure that reading is not cool dampened her reading appetite.  However, she is now being bribed.  Her mum does not give her any pocket money so she is being given $10 for each book she reads.  Yes, it's bribery, but in a good cause and she is actually enjoying reading again.  Sort of situational ethics, I guess, the  end justifies the means.

No, my title refers to the surprise when I checked my mail box a few minutes ago.  There's often a pile of trash and I get little posted material.  Most of my bills come via email and I pay them online or by direct debit.  There were five letters today, all addressed to me.  No junk stuffed in the box.   Three were small pendants I bought as part of birthday presents for the granddaughters.  I'll need to add to them, but it's a start.  They aren't "little" girls any more, they have more than enough play things and stationery.

One was a catalogue from a firm I occasionally buy vitamins from.  Sort of junk mail, sort of addressed mail. 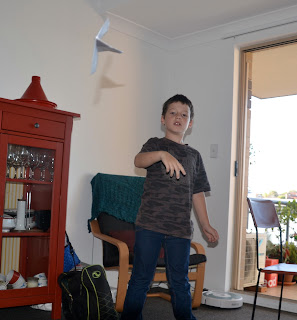 The fifth was a voucher for $30 for a supermarket.  I have  been buying a particular brand of cheese for years.  It's good and strong, but also importantly, it's been consistently good over the years.  I've cut down a lot on the amount of cheese I eat, not deliberately but it's definitely less.  The last three packs have been nowhere near as good as I expected.  They have had excessive salt and I actually threw out about half  a pack of the last I bought.  That annoyed me, so I emailed them giving batch details etc.  I received a very prompt reply and this $30 voucher.  The letter said their reputation was important to them.  So good service there.

Easter Day lunch was good and the slow roasted lamb was a great success.  Master Seven made and flew paper planes and Miss Twelve borrowed my big camera.  I did set it on auto, I use the manual settings, and I explained the distance setting to her.  She took some good photos, and deleted those which she didn't like. 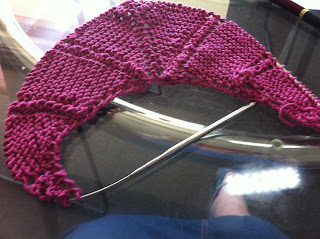 I bought some Lana Gotto Supersoft merino a few months ago for a short row shaped shawl  I've tried it a few times, haven't reached anywhere near the shaping and given up.  So two days ago, I started Milkweed again.  I think this is the fourth time I've made  this pattern, it's easy and effective and fairly quick.  The yarn is pleasant but it's very splitty.  The needles are the new Addi clicks I bought.  Not Addi lace which are quite sharp.  Even these fairly blunt  needles split this yarn if I am not really careful.

It's cool and wet here today, very restful actually.  I'm going to make a small pie from the very last of Sunday's roast and vegetables and leftover gravy.  It's that sort of day.  Then I'll freeze the bone for  some lamb and barley soup.
Posted by Jan at 3:12 pm

Glad you had a good day. We had a 2kg leg -- it all got eaten. The leftover potatoes were reheated for last night's dinner; the leftover cauliflower will be made into soup.

My grandsons have really gone this time and I am totally heart-broken!

I did immediately think of Terry Pratchett. I did enjoy the recent TV shows. They were very good. Wasn't Dodger great?? I think reading pretty much anything is great. As long as children are enthused. I am at a loss to explain why people look down on Enid Blyton or baby Sitters' Club or whatever boys books there are too. No-one is still reading Enid Blyton exclusively when they are adults!!!
Well done on your proactive complaining about the cheese, it is nice that they obviously value their customers.
I am glad it is cooler and that you are enjoying your latest knitting. I bet it is free form debris!!

It does sound like good customer service. I think people should always say when they are dissatisfied with a product, and I dont like it when they change their recipe and dont advise you.