it was a dark and stormy night 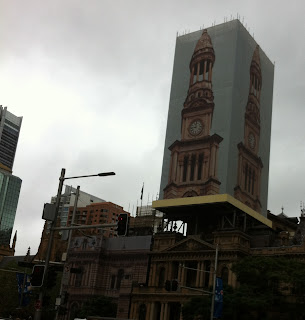 Well actually, it was a dark and stormy morning.  This very grey photo was taken just after 10:00 am yesterday as I was on  my way to have coffee with another blogger.  We live not far from each other really as the crow flies, but she's close to one road leading to and from the CBD and I'm close to another from a different direction.  I needed two buses to get to the coffee shop, regardless of which way I went.  The Town Hall tower or clock is being renovated or cleaned or whatever, and this scaffolding and awning has been erected around it.  Yes, it really was as dark as the sky shows.  The breeze was cold.  However, I managed to avoid any rain and we had a pleasant morning.  She gave me a jar of beautifully clear quince jelly which she had made.  Nicely set and tastes great.  I had some on a piece of bread when I returned home.  A pleasant morning which actually turned into a sunny afternoon despite this beginning. 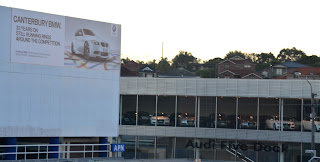 I can imagine a duelling pair of advertising agencies.  The Audi dealership has been there for years, probably at least fifteen.  The wall hosts many posters which are fixed by several men abseiling up and down the wall.  Some ads are clever, others like the last one are unpleasant  for one reason or another.  The last one was garish red and yellow and was spruiking medications for men.

This poster is much more subdued and even classy if such a thing can be classy.  However, I can imagine the firm concerned smirking behind a hand and saying something like, "Here's one in the eye for you."  The BMW ad is directly in the line of vision from the upstairs of the Audi dealership.  This photo was taken just after dawn this morning.   All the photos are a good deal clearer when enlarged by clicking on them.  The light is poor in  each photo. It's just possible to see the Audi sign on the building.  I was awake so got up and showered as I wanted to take a photo of another Milkweed shawl before the sun sucked all the colour from it.

So here is Milkweed, certainly version 3, possibly version 4.  I'm too lazy to go back and check.  It's done in Lana Gotto on 5.o mm needles, part of the new Addi Clicks set I bought.  It took almost five balls of the yarn.  I had bought it for something else which never worked so I did this.  The pattern is easy, just needs some attention to it so decreases line up properly.  Last week was unpleasant with totally untrue accusations from DIL against me and another DIL.  Accompanied by some strange behaviour which I think is fuelled by excessive dieting which has been accelerated by probably amphetamines.  Courtesy of the new boyfriend and I was very sad about it.  She's lost over 30 kg in a bit over three months and lunch one day last week when I was there was a can of  CocaCola.  Not good and I'm sure her brain is affected. 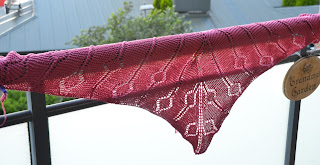 The rhythmic knitting was just what I needed to block out some of what she had said.  When I started it I just knew I needed to knit something like this.  I have a couple of these and enjoy using them.  By the end of the week, a recipient had arisen and I'll give it to her on Saturday.

I still need to weave in the numerous ends on the wrong side.  It's bigger than shown here.  Several inches are over the top rail on my awning and it's held there with some pegs.  There's  a kink in the centre from another peg and the yellow of that can just be seen through the shawl.  This too was taken early this morning, not long after dawn.  I face northwest and the bright sun sucks colours easily later in the morning.
Posted by Jan at 12:21 pm

The shawl is so nice, I clicked to embiggen it and I could see all the lovely detail. No wonder you make it again and again.
Clever idea to have the picture of the clock on the covering. Our PO clock in town had a little conniption when they changed the time back from Daylight Saving so it had to have some extra TLC.
We don't have that many billboards and I have never seen one for unpleasant things.
Oh dear, I too am sure a can of Coke is not a meal. I hope things sort themselves out. It is hard to remain gracious sometimes.

I'm so sorry to read that DIL is causing problems. Please don't take them to heart -- as you have recognised, it's not really her saying those things!
Pretty shawl.
Funny weather we've been having, isn't it?