the staff of life 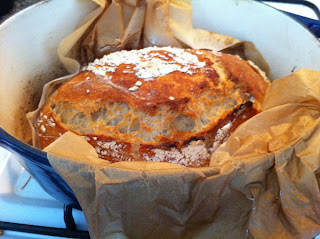 As I've noted before, I've been making bread for years, too many to want to count actually.  However with the no knead recipe flying around the internet and people like Cindy turning out lovely loaves, I thought I would give it a try.  Cindy cooks all sorts of things but has always shied away from yeast cooking.  She made a loaf of this no knead bread and now seems hooked.

So yesterday afternoon, I had a look at this recipe which is called Josh's even lazier than no knead bread.  That's why the baking paper is in my picture.

I had too much water in my mix so added more flour in this morning.  I was still unsure whether I was wasting my time but decided to cook it anyway.  This is how it turned out.  Picture was taken about a minute after it came from oven.  The recipe suggests the baking paper being used so there is basically no cleaning up.  Dough is turned on to the paper for shaping, not onto a floured bench, then put in a very hot cast iron casserole or anything oven proof providing it has a lid.

This loaf has about 35% Attar flour which is an Indian wholemeal flour available certainly in Coles.  It has a pleasant nutty flavour.  I'll experiment with another mix, but this was certainly easy and looks as if it should be delicious.  I might try the quince jelly I was given last week on a slice. 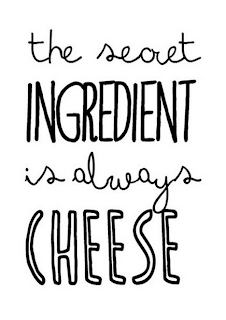 I smiled at this picture this morning when I opened the site of my fruit and vegetable supplier to place an order.  He regularly places recipes and other related items on the site.  I can really identify with this picture.  I love pretty well all types of cheese, although I seem to have cut down a lot on my consumption of it. I have no cholesterol type problems, just seem to be eating less cheese than I used to.  However, I really agree with the picture.  Cheese improves many things. I always have some reggiano or similar in fridge, cheese for pizza stays in freezer, I love a good camembert or brie and am fussy about a good bitey cheddar.  I don't buy blue cheeses often as I have to be very self-disciplind  to have just a small amount.  Gorgonzola melted into lasagne is great, it gives a hard to discern something extra to the lasagne without being obviously gorgonzola.  Bitey cheese with a granny smith apple is good too. I remember making cheese bread in the little Bega woodstove we had on bush property at Wollombi.  It rose so much that the extra cheese I had placed on the top stuck to the roof of the oven!  Everything I cooked smelled cheesy for quite a while after that.  That was a loaf made in a big old fashioned 2 lb. loaf tin.

I went with friend and one son and his wife last night to local good pizzeria.  He had asked two young Malaysian sisters for dinner to celebrate  their birthdays, one a 21st.  They are studying here and he met them in the course of St John Ambulance duties as they have joined a division here.  I gave the Milkweed shawl which is shown in previous entry to the girl who had just turned 21.  I hadn't met her or her sister before although DIL knows them quite well.  She was amazed someone could not only make something like that, but also give her something handmade.  It was a very chilly night here, so she put it on before we came outside.  It is actually simple knitting, very soothing which was what I needed at the time, just rhythmic counting of pattern repeats.  Not hard at all.

Now to see if that loaf has cooled enough to cut.
Posted by Jan at 11:32 am

The bread looks delicious! I love a good cheese too, although I don't like blue cheeses -- I just can't stand the sight of them! Working in the deli section of a large supermarket chain for five years opened my eyes to things beyond the meat ant two veg we ate at home!

Oh cheese is my downfall. I haven't met a cheese I don't like yet, though I think the maggot infested boutique cheeses may be off the menu!! I found some of that flour in my Coles and I plan to start a new loaf at noon tomorrow. I read your paper bread link and I am now thinking where will I be in 18 hours!!!
What a lovely gift to give the young woman.