is hosting morning tea this week as part of the World's Biggest morning tea campaign for the cancer council.  She is calling it a Very Bloggy Morning Tea.

So here is my contribution.  No biscuits but an old recipe instead.

She has a link on that post in the sidebar for anyone who may wish to donate.  I won't be donating to the cancer council this time as I reserve donations to there for fundraising by my family.  That doesn't take long to add up as I give a generous donation equally to any family members who fund raise.  There have been special raffles organised by my sister who raised over $20,000 for them.  Relay for life has featured several times  and with three sons, Movember features heavily.  The world's greatest shave is another many of them do and my eldest grandson also had his head shaved.

Mum had Chronic Lymphocytic Lymphoma for some years before her death five years ago.  She had treatment for it at first, but the treatment made her so ill that she discontinued it.

My sister was first diagnosed with a  rare form of breast cancer in 1997.  It has returned several times and there was also a spot on one lung of the same type of cancer a couple of years ago.  She's had several operations with side effects, has had two reconstructions and some really nasty illnesses because of  the compromised immune system.  Absolutely terrible eczema which lasted three years was just one of the side effects of the cancer.  That was treated with the same drugs that transplant patients are given, but a a much increased dosage. 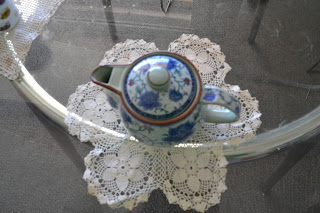 She's now well enough to live life again and last year drove across the Nullarbor and well up the WA coast.  By herself, towing a small van. This year she has been housesitting in various locations and has just left south of Canberra to go to Coolamon further southwest. 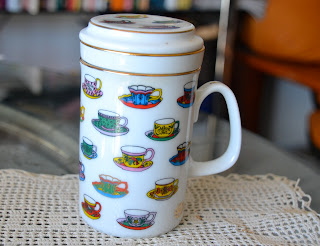 While down from Canberra, she went to morning tea there in the 1880s school.  Later that week, she went to a quilting morning but didn't have the  right supplies to sew, so was given the task of counting the money from the morning tea.  The small hamlet she was living in had raised several

My pictures show some vintage handwork from my great grandmother.  Both pieces have a couple of rust marks on, cunningly concealed by skilled placement of pot and cup.  The cup is Mikasa, brought back from Sri Lanka  by one DIL on one of her frequent visits there.  It is put out by a Sri Lankan tea firm called Mlesna.  It was accompanied by some genuine Orange Pekoe tea which was lovely.  I don't like  what is available at shops here, but this was lovely.  I can see this being used a lot in winter with the lid to keep the tea hot. 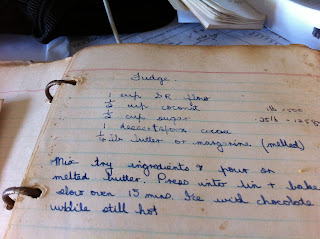 Now for the recipe.  This was made originally with Smalls dark chocolate.  Nestlé have now  taken this over and have added far too much sugar.  Find something dark but not too sweet.  I haven't made these for a while as they have condensed milk in them.  Not the full can, and you can  guess where the rest of the can would go.

The picture shows my red recipe book, source of many fvourites.  My sister started this as a 21st birthday present and I added to it.  All sons haave an updated copy of th  favourites from here, bound at Officeworks  with a strong cover.

.  Roll in extra sugar.  Place on baking tray and flatten with the back of a fork.

It is so hard when family and friends are ill, and it certainly helps when you feel you are making a contribution. Beautiful handcrafts definitely run in your family and I love your clever placement. I felt the same way about the jasmine tea someone brought back from overseas- so much nicer than the tea here.
I shall have to give your recipe a run soon. I have some condensed milk in a ziplock bag in the fridge!!!

What a beautiful post. That recipe sounds delicious, and the teapot is gorgeous! Thanks for your support and help spreading the word. And your sister sounds like one amazing woman!!!
Greer xx

So glad that your sister is doing well enough to live life again. I know just what you mean by that. I'll have to give camel yarn a try some day. I wish I had access to some really good tea. The tea in the United States is just pathetic...


Hi there! Do you know if they make any plugins to help with Search Engine Optimization? I'm trying to get my blog to rank for some targeted keywords but I'm not seeing very good gains. If you know of any please share. Cheers! outlook login