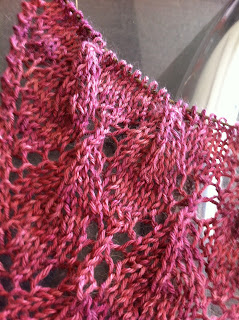 Back in about March or late February, I joined a lace club from UK. Sally, Pompom ,was running some posts on reliable suppliers with good reputations and Anniken was one often mentioned.

I joined for three months and received this as the first instalment in the club. There was a pattern as well with several months exclusive use by members of the lace club and a discount offered on any other purchases while a member of the club.  I tried the pattern, it's not difficult, but my mind was obviously not in the place needed to work with just under 400 stitches to start the shawl.  I ripped it back three times and I let it sit on my table for a while.

I found this, which I've done before.  It's also a design by Annie and is called Trinity.  It comes from here which is a charity site  benefiting Médecins sans Frontières, Doctors without Borders.  The idea is that you download the pattern and there are quite a few to choose from, make it up and then make a donation.  I'll make another donation to cover this knitting. 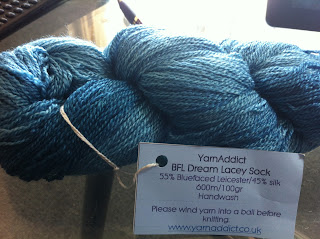 The yarn itself is gorgeous to work with.  Very soft and smooshy and a dream to knit.  It's a mix of camel and silk.  I'm about halfway through the pattern. This is only part of the pattern.  I'm using Addi Clicks here.  I like the needles but the cables are very twisty and double back on themselves unless I'm careful.  I much prefer my original Knitpicks cables to these.

This next picture shows the next instalment of yarn from Annie.  It's slightly thicker than the camel and is more like a normal sock yarn.  The shades of blues are lovely merging into each other.  Bluefaced Leicester and silk.  I'm looking forward to knitting this too. 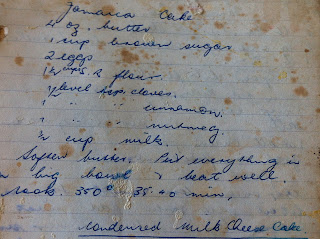 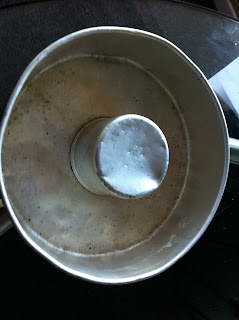 The last photo for the day is an old recipe from my very old recipe folder, originally a 21st  present from my sister who is some years younger than I am.  I was also going to photograph the battered old ring tin I use for this.  It has obviously been dropped and bumped many times but I grease it well and the cake just slides out.  I hope one of my sons hasn't snaffled this tin.  I had a good look in the cupboard, even used a torch, but couldn't see it.  Perhaps that's a prompt that the cupboard needs tidying.

This recipe came with the electricity bill.  Way back then, the bills came with a glossy little newsletter and some recipes.  I don't use the nutmeg, or may use a pinch.  I substitute powdered ginger which I much prefer.  Use soft butter, dump all ingredients in bowl and beat.  It's pretty well foolproof.

No such niceties with the electricity bill now.  Mine landed in my email inbox this morning and I gulped.  It's not enormous, my brother who doesn't get a concession has a much larger bill. 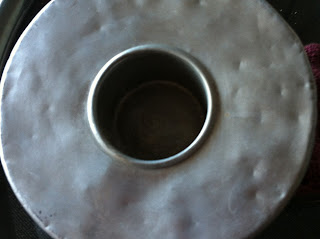 However, 26 months ago when I first moved in here I was given a Centrelink concession and the bill was about $115.  It has climbed steadily upwards.  this morning's bill showed and amount a whisker under $160.  My pattern of usage hasn't changed, so it's all increases.  The joys of privatisation.

I found the tin I was looking for. It was full of muffin papers, tiny gingerbread men cutters etc. As you can see, it's had a rough life.  I think  my grandmother gave it to me and it was bashed and battered then.  I'm sure that i and my sons have added to the bumps over the years,  but it soldiers on.  Like the recipe, it's foolproof and has never failed me.
Posted by Jan at 3:38 pm

I think I have the same ring tin, although not quite as well-used as yours!

My mum has a tin just like that. New tins don''t last, do they? The new wool is a pretty blue and I hope you have a little more luck with your lace now.
Our electricity has more than doubled in price in the last 5 years and looks set to increase even more, even though we have green Hydro power. I don;t know what's going on.