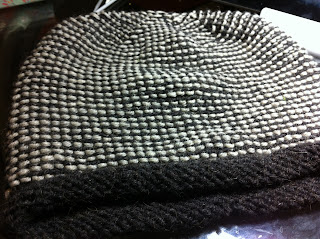 Here's the second hat I've made from camel fur recently.  The yarn is from Suzy hausfrau.  This hat is for my eldest son who normally insists on black, black and noting but black for his hats.  However, I sent him a link to Renae's pages and he approved these fifty two shades of grey.  They were sent from Canberra last Monday and the hat was finished by Saturday evening.  It's slightly deeper than that made for #3 son who often has his head shaved.  He suggested a few more rows to accommodate his brother's hair.  The first hat is a firm favourite with #3 son as it covers his ears well and can come down over his forehead. 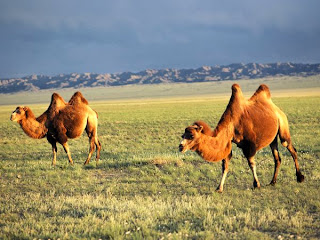 The yarn comes from the fur from the of Bactrian camels, now endangered.  They live in the deserts of Central Asia and are double humped.  According to this article the fur drops off the animal in the summer which can be very hot, while growing thickly in winter as a protection against sub zero temperatures.  It is that fur which is made into yarn.

The yarn is easy on the fingers, I thought it may have been harsh.  Because this hat is done with alternate balls of yarn, the tension is firm and the hat itself is very warm with a solid fabric.

Pete's brother was down here today with his daughter and son, it's his weekend for them and I saw he had the hat in his bag.

While the days are nowhere near as cold as the Gobi desert is in winter, it would now seem that winter is definitely on its way.  The weather was beautiful today but the morning was chilly.  When the sun goes, I can feel the temperature drop substantially.

I had bought a butterflied leg of lamb with rosemary and garlic.  I lit the heatbeads early in the BBQ as I'm not always competent at getting them going well.  Today however, all worked and they caught fire and burnt down easily.  Son heaped them to each side of the BBQ and cooked the fairly large leg slowly.  I did vegetables in the oven as  my BBQ is quite small.  Lunch was lovely and my grandchildren both had seconds.  Tim and I had some wine and we could all have had an afternoon snooze.  He caught a fairly early train home, it's about 90 minutes in total from here, so he was home in the light and before it got too cold.  Lovely to see them all  and the children enjoy their weekends with him.  Neither of them is impressed with their mum's new boyfriend, especially my granddaughter.  we tell her it's OK not to like someone, but she must be polite to him.  At least that way, she should be avoiding trouble as much as possible.
Posted by Jan at 5:21 pm

That's a nifty looking hat, Jan. Is it your own design?
-jen-

Oh, I want to say 'One hump or two??"!!! It's a lovely hat and I didn't know that's how they sourced the camel wool. It even looks snuggly, and I read that desert nights are very chilly.
I told my class that sometimes you have to be polite to people, you don;t have to be their friends, but politeness works wonders.
Sounds like a lovely family gathering.