if at first you don't succeed... also known as winter is icumin in,

So the thirteenth century song has summer not winter, but I suppose there must have been winter for people to sing about summer.  Right?  This morning was chilly, quite chilly even at my place.  Winter seems to be really thinking of arriving.

I had to go out this morning to collect a parcel  from  the Post Office which I missed yesterday.  I managed to write a whole post before I had to leave.  Went to add some pictures and the post disappeared totally.  Grrr.  SO I am trying again.

I could have finished bedsocks for granddaughter if my son had let me know the length of her foot.  I have reminded him twice so think I will just guess.  I could have done the second sock in the time I have been waiting. 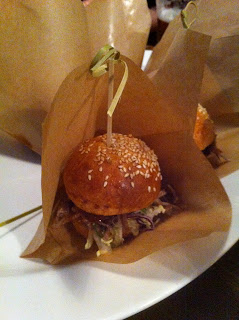 Mothers' Day saw two sons, myself, DIL's mum  and DIL at a pub called Vic on the Park.  Opposite Victoria Park in Marrickville with a new aquatic centre.  We had been going to buy cafe takeaway for a picnic but other son could not come as his wife had a very nasty ear infection.  So we went to pub for lunch. Very good too.  Three of us shared an entree and some tiny sliders, duck and chicken.  The duck was really good with a subtle but pleasant blend of various spices. 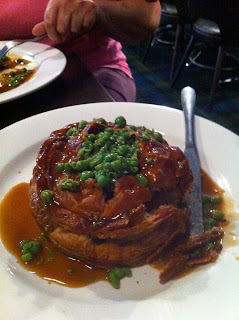 DIL had a beef and mushroom pie in honour of my mother.  Mum used to cook skirt steak, red wine and mushroom on the side of the slow combustion wood stove in the kitchen for hours and hours.  Then she would match it with her delicious homemade pastry.  The result was a superb pie.  One son said my pies were 8/10 because I used commercial pastry.  Mum's he classed as 12/10 because of the filling and her pastry.  After lunch we adjourned to son's house for a flourless chocolate cake made by other son.  Very good and it was a pity the gluten intolerant family wasn't there for it.  Actually, it wasn't a pity, we all had a larger slice.

I think winter might be quite cold.  When we were at Wollombi near Cessnock in the Hunter Valley, mice would start arriving at the first sign of a chill in the night air.  I had to secure all food in mice proof containers there.  My son on the Central Coast has had a couple of mice recently.  My brother on the upper north shore had to reorganise all storage in his pantry after an onslaught by mice last week.

Yesterday I was at the doctor's for a repeat prescription and a flu injection.  Also had pneumonia vaccine as he thought it was a good idea.  While I was waiting I could see a mouse running around the car park outside.  I told the doctor who was horrified.

However, the best  story belongs to my sister who  is minding a house about 40 minutes south of Canberra while the owners are overseas.  It's been cold down there, well below zero many nights.  The house must have lots of entry points for mice as the owners were well aware they would be there.  She also had to remove an almost dead rat from the pantry.

I have a shower in the morning.  She has  bath at night before bed.  Two nights ago, she was carefully hanging up her towel AFTER she had used it.  As she hung it up, a mouse fell out of a  fold.  Eeeuw! The place is lovely, but she will be glad to be out of there.

Now to  wind some more of the camel from Renae at Suzy  hausfrau at Canberra.  No 1 son saw the agate and navy hat described in post below which his brother now has.  He asked for one and I have bought two shades of  grey.  He will normally wear only black hats, so this is a change and I am striking while the iron is hot.

Sounds like you had a pretty good Mothers' Day.i unexpectedly got to see my grandsons and daughter so my weekend was wonderful.

My mum's homemade pies were pretty ho-hum and I've only ever tried to make pastry once -- in December for the mince pies -- it was pretty awful!

Even with three blankets on this morning was way too cold for me. I had a hair appointment at 9am and the shopping centre was freezing! Except in K-Mart where they obviously have their own independent system! WM has just told me that they said on the radio this morning that it was 4* but felt more like 2*! I agree!

Hi Jan!
I'm about 15 minutes rather west, but still local.
Horrible mouse story!! Was it alive?!

I have such a clear memory of sitting at College(Uni) and reading Chaucer and understanding it when it was read aloud!! It is only icumen in a little bit here. I wore my Summer dress again today!!
Sounds like a lovely Mother's Day and the food looks delicious!! Those little sliders are very trendy now.
I am intrigued by your camel knitting and await a photo!!
Oooooh no,your mouse towel story is horrid. I once read about a mouse squashed in the bottom of the toaster and no-one realised it was there for ages and it was toasted. I always have to check the toaster!! The whole island here has a mouse and rat plague because of the good weather but lack of rain.