Greer tops off a wonderful week of bloggy morning tea posts and recipes, finished off by some nostalgic photos of teasets and hand crafts. She's well on the way to reaching her target of donations too. She doubled the target from $1000 to $2000. If you can help, and every little bit helps, there's a link in the right side bar.

She talks about her mum and how much she misses her. I miss my mum too and remembered the way she too liked a little tipple. Bubbles never were refused and even when Mum lived alone after Dad went into care with Alzheimer's, she lived a very civilised life. She never read at the table, not even at breakfast or a book with lunch. There was always a sherry before dinner and a glass, sometimes two, of an appropriate wine with her dinner.

I became nostalgic as Greer spoke of her mum. I counted up the people in my family who had been affected by cancer. At first I had only Mum and my sister. Then I realised my uncle, Mum's brother died of throat cancer, made worse by smoking.. Then I remembered the number of malignant skin cancers Dad had removed every year. My grandmother, mum's mum, died of liver cancer. My brother has had two operations for prostate cancer. Family, but not blood relations are my sister in law, my brother's wife who died of liver cancer, a secondary from bowel cancer. Her son was just ten years old. One DIL has regular three monthly Pap tests for cervical cancer and nasty pre-cancerous lesions removed regularly. Three monthly! How long since you last one? This was discovered when she was pregnant with my youngest grandson seven years ago.

My sadness was compounded by a truly horrible accident here less than a minute's walk from my place. A tanker with 20,000 litres of milk ran across the road and hit a corner shop. It burst into flames and the driver was killed in his truck.

The main road, one of Sydney's biggest roads was blocked for more than eight hours. It is possible the building he hit will collapse. I knew of the accident, I could see road diversions up to Fivedock opposite my apartment. Buses were cancelled. Two routes use the corner which was affected. there is an underpass under our building and some motorists thought they could use that to get back on the main road. That caused a further snarl as they had to reverse and return as access was blocked. 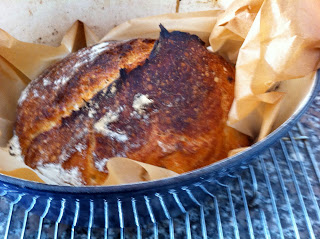 I was watching the traffic as I ate breakfast and glanced up to see a police escort for a huge tow truck with the tanker behind it. I wished I hadn't seen it. There was nothing left of the truck cabin except the back wall of the cabin. It leant backwards at a precarious angle so it almost touched the tanker itself. I was horrified and have felt ill as I remember it.

So I have had a comfort eating morning tea. Some green tea with mint and a slice of freshly baked bread, made this morning, although it had been rising all night. This has been made with James Squire Chancer Pale Ale so has browned more than usual. Extra sugar, I guess.

It tastes good and I topped the slice with good butter and some beautiful clear quince jelly given me by idle persiflage. Very comforting. 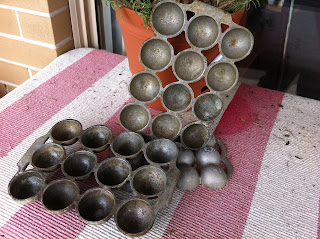 And now for a recipe. For those of you who are younger, these are irons for gem scones. I haven't used them for long time as is obvious by the way they look. Gem scones are quick to cook and totally delicious broken apart and eaten with butter or good jam. Scone is a misnomer, they are more cakey than scone like. The irons are heated in the oven and just before the mix is dropped in, a dab of butter is dropped into each cavity. You may find these perhaps today in an op shop. My irons are cast aluminium but I have seen cast iron too.

Cream butter and  sugar and add sifted flour and salt.  Mix egg  yolk and add to milk. Beat egg white till stiff and fold through mix.

remove irons from fire, drop a bit of butter in each one and add  dessertspoon of mix to each.  Cook for about 15 minutes, till puffed up and brown.  Time depends on oven.  Best eaten hot.

I know Greer is very grateful for all who have helped.
Posted by Jan at 12:03 pm

Really horrible accident...Sorry to hear it happened so close to your place Jan.

My nan always made gem scones. They were special to her. Cancer has touched us all in some way, it is a good thing scientists are so clever and people contribute to help with their work. I know The Menzies Centre here and Clifford Craig both do a great job.