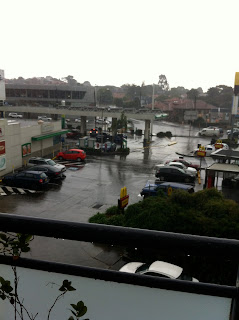 I was thinking of the rhyme from childhood, "rain rain, go away come again another day." After the drought some years ago, I vowed I would always be thankful for rain.  However, we've now had days of it  and more is forecast. Today is Tuesday and even next Monday's forecast suggests showers.  And it's cold.  Winter arrived after a prolonged  too warm autumn but it's definitely here now.

So it's comfort food and even a return to old favourites.  One son made something along the lines of my mother's famous meat pie with meat cooked for ages before turning it into a pie.  It was  good and his son and daughter gobbled it up.  His daughter, Miss Twelve, made a very good chocolate cake for afters.  That was deep and chocolatey.

I am making an old fashioned stew tonight and it's been  a while since I had that.  I was never particularly fond of it as a  child, but memories of it suggest I should like it now.  I'm even making some dumpling s to go with it.  I've rubbed the butter into the flour and will add liquid closer to eating time.  I like dumplings but ex-husband didn't, so it's a very long time since I made them.

I saw a recipe for a pumpkin and parsnip bake in the Womens Weekly magazine.  I thought it would be a nice change to potato so I made it, downsizing it considerably.  Even so, it did as a side vegetable several meals.  I love parsnip and will possibly do this again. 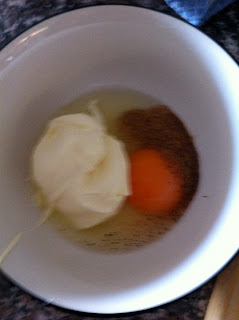 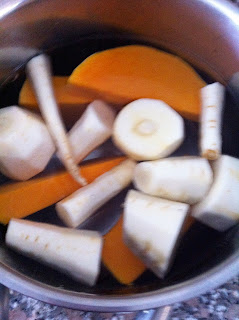 Parsnip and pumpkin ready to cook.  I have always admired their recipes and they seem reliable.  I did change some things in this one to make it easier for me and because I could see no reason for the instructions.  I chopped the vegetables so they would take a similar time to cook.  The instructions said quite strongly to "cook in separate saucepans." as you can see, I didn't.  Not only did I put them in together, I then used the cooking water as part of a basis in making soup from some chicken bones. 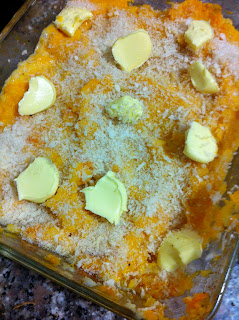 When cooked I mashed them into a greased small Pyrex baking dish.  The instructions said to mash with a quite a large amount of butter.  I omitted this as there was also  a mix of  cream, nutmeg and an egg to be stirred through.  With cream, I didn't think the butter was necessary.  I don't like nutmeg but always add it to pumpkin soup and similar dishes.  It adds a bit of je ne sais quoi to the dish.

Then came more butter.  Recipe said to melt butter and pour over breadcrumbs for the top of the dish. Then put buttery crumbs on dish.I sprinkled panko crumbs over and added small dots of butter, much less than quantity suggested.  I like  butter and don't use margarine at all but the amount in total suggested for this dish was absurd, especially as cream and egg was also used.

It was good and I  enjoyed every bit of the several serves I had.  When it was cold, I cut it into more serves and just heated  up a portion each night.  The flavour was like soups and curries, maturing later.

Son and Master Seven received their fingerless gloves shown below at the weekend.  Master Seven was funny.  Before he had even seen his, he thanked me over and over for buying the special yarn, for getting the colour he asked for, for actual knitting.  He was ecstatic when he tried them on and they were a good fit from the pattern of his hand he had done.

Son's gloves also worked well.  It was a pattern from Patons Winter Warmers, using Jet, which is 12 ply. The camel is worsted weight so I went down in size for the needles.  I knit loosely and all of that combined with a bit of guesswork for thumb and length of  glove all actually worked  together.  A really good fit for his large hands and I've just had a text  saying how welcome they were on the station this morning in the cold and rain.

We are a land of extremes. You want the drought to end?? Here's a flood like Noah's.
I saw the MasterChef man make mashed potatoes and I believe he must have put about 500g of butter in there. It must have just tasted of butter. I never use margarine, I like butter. I spoil myself with local proper butter. They have garlic and unsalted too!! It sounds very sensible to cook all the vegetables at once. They are being mashed together. Panko is great!!
It is nice to have your knitting so appreciated!!!

I so enjoy your recipes. I've said it before and I'll say it again --I wish I lived near you and you invited me to dinner. I'd never leave!