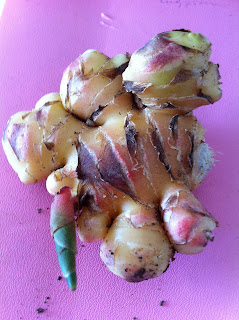 I was near Bowral yesterday with friends for lunch when our hostess jumped up from  the table and produced a plastic shopping bag with a large lump of something in it.  It was ginger, freshly dug up that morning.  I chose this piece, about the size of my palm.

The dirt can still be seen on it and there's some mud on the other side.  It's very young and juicy and has absolutely none of the usual dry scaly skin of commercial ginger.

I tasted a very tiny piece of it, just a dot really.  Very spicy and quite hot.  I love ginger and appreciated the gift.  I think dinner tonight will be a stirfry of chicken tenderloins and definitely some of this ginger.

The mauve  background in the photo is a Moleskine notebook which is always beside my computer for notes, coded passwords, queries etc.  It's not really this colour.  It's a pale pink.  I have no idea how the camera picked up those fairly violent tones.

I have been knitting all week at times on two projects but neither is really worth a photo yet.  One is  the pink shawl shown in post below,  from camel/silk laceweight from an English seller.  The other is more "clever camel" from Renae at Suzyhausfrau in Canberra.  This hat will be the third I have done, one for each of my sons.  The fabric on 5mm needles with worsted weight yarn is firm and I guess fairly windproof. 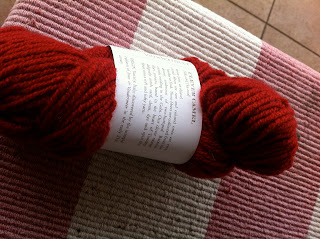 This is some more of the clever camel.  It's for gloves for Master Seven.  A boy of very definite ideas, he wanted "Red, Grandma.  You know, RED!!"  I got the message so I hope this suits him.  He drew an outline of his hand and I think I can work out how many stitches will be needed.  I may put a stripe of black or navy on the cuffs and around the top.  They won't take long to knit, but I want to finish his uncle's hat first.  His school uniform is red, so I guess these will go with it.  They will certainly be warm.

I have not been to any of the Craft Fairs in Sydney for some years.  I found that most of the time there was so little knitting stuff there, that I lost interest in all the other stalls and displays.  I love looking at quilts and admire them, although quilting does not interest me to do at all.  Teddy bears are not really my thing, and I like beads but one DIL makes her own glass beads, so I don't really need them.

I may go this year.  It's on in Sydney at Darling Harbour for four days from Wednesday.  However, Renae at Suzyhausfrau is having a stall there and I would like to see some of her other yarns in the flesh, so to speak.  Swan Island is lovely but she has just received stock of others where she is the only dealer in Australia.  I would also like to thank her in person for her wonderful service and speed in despatching orders.  And for untangling a mess regarding a product I bought. 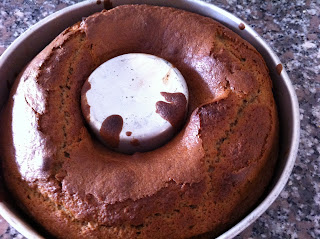 I was very busy on Friday.  I spent a lot of time cooking, both for me and to take out to Bowral yesterday.  This is the spice cake and battered tin mentioned in the post prior to this one.  I haven't made cake here since I moved in.  There's really only me to eat it and I don't need it.  It was an experiment which worked as I had to guess what temperature to use in my fierce oven.  People enjoyed it and there's only a small piece left here.  I guess I can deal with that!  LOL.

I made pizza dough and used that to make some pinwhirls as my old recipe calls them.  I had a large tin of salmon in the pantry so I mixed that with fresh dill and some mayonnaise, lemon zest and juice.  Spread that over the rolled out dough, roll up and cut into slices.  A bit of grated cheese on top and into the oven.  Very nice, easy, filling and delicious.  I did the same thing with the remnants of  a chopped up pork meatloaf  and use a spread of homemade spicy tomato sauce.  They were good too.

And finally I made a different potato bake.  Cindy remarked in a recent post about the great edition of Better Homes and Gardens of a couple of months ago. We were both impressed with the large selection of slice recipes, both sweet and savoury.  I had been wanting to make the potato bake with celeriac for some weeks but had not found celeriac in the shops here .  Blame our far too warm autumn, I guess.  I found some a few days ago so that went too to Bowral.  Finely sliced peeled celeriac, finely sliced potato and I made it tri-colour by adding finely sliced sweet potato.  Layer these in a greased oven proof dish.  When dish is half full, sprinkle with some grated cheese, pepper and salt and fresh sage.  I know a lot don't like sage so I used fresh rosemary.  Pour over some cream, 300 ml used in entire dish.  Then repeat layers and toppings.  Bake  till potatoes etc are soft.  Very good on a freezing day in the Southern Highlands.

It seems a lot of food to  take but a couple who also bring lunch weren't coming and the hosts had just returned from a week in North Queensland.  It all went down well.

Not so good on the personal front here.  Son's ex-partner seems to be intent on destroying herself and I can't say much.  Son says the person he knew for many years is dead.  Not said as some cultures would say in a vengeful tone.  More sorrowful, as he sees her making all sorts of wrong decisions.  The person he knew does not seem to exist any more.

Middle son was made redundant along with others from his work.  The firm has been very good about it, but they are not the ones paying the mortgage.  All sorts of help and assistance is being given to them in new searches, but it's not the same as a job.

Sounds like you've been cooking up a storm! The ginger looks very tempting.

I love the red camel - it was hard to pass it up for the cowl I am making, but I went with the pale grey instead.

The ginger is great, sometimes we get fresher less scaly ginger in out big greengrocer shed. I like it. Nice camel in red and I think it's great he knows what he likes. Oh, no celeriac here either, and I had completely forgotten about the slices, I must get my magazine out tomorrow!!! It sounds delicious. Winter food is always so comforting. I am sad to read about your sons' lives being not so good. I hope things are more positive soon.
We don't have a craft and quilt fair this year, I especially LOVE looking at all the quilts. Maybe it will be back next year???

Really fresh ginger would be soooo...good!

Oh my! You lulled me into a false sense of piece with talk of fresh, spicy ginger and cake followed by talk of crafts -- then hit me with the double whammy on the family front! I hope both situations are more settled now!