I had not realised  just how long since I last updated.  Lots of stressful stuff here, mostly to do with my sons. 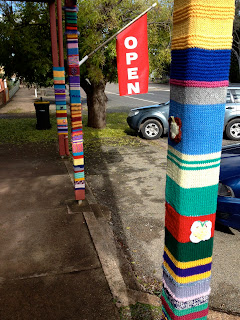 One son who had a back operation last year is facing the very real possibility of another almost immediately. He and his wife had been planning on moving to Strasbourg, France for several years with a departure date of 29/7.  I have never been happy with this idea for a variety of reasons.  They've sold their house and another they owned and are selling an investment place in Brisbane while they will keep a couple of units they own here.  DIL has been giving away much stuff and selling more.  However, the disc that was operated on a year ago  in son's spine is playing up and he is just as much extreme pain as he was then.  It is herniated (bulging) as a lot of bone was removed in the first operation to free a trapped nerve and a hole was drilled in the disc, making it quite unstable.  This operation would be to actually replace the  disc with an artificial one.  Lots  of recovery and rehabilitation needed.

Middle son still has no work except temp work after being made redundant almost two months ago and the youngest is worried about his children and decisions their mother is making with her own life and how they may affect the children.

I've been knitting as a way of helping cope with all this.  My laceweight second instalment of blue  blue faced leicester/silk mix is very slowly on its way to another Aestlight shawl.  No photos there as there's not much of interest in a garter stitch triangle slowly creeping up to 154 stitches, one stitch increase per row.  I think this is the fourth time I've have made Aestlight. 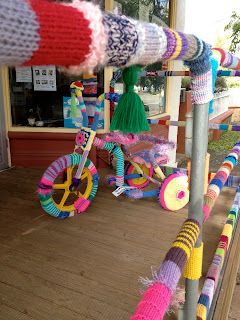 My sister has been housesitting at Gladstone in the Flinders Ranges in SA.  She says it is beautiful and green there and she's driven around  sight seeing quite a bit.  She found a butcher selling home smoked bacon and is raving about it.  Rich, dark and smoky and she'll buy more for breakfasts in her little van on the way home when she leaves at the weekend. These two pictures come from Wirrabara which has a large forest area.  The little township was neat and clean and even has a street sign to show the way to a school garden started by Stephanie Alexander.

I've never been a fan of yarn bombing, although I know people who are.  They become quite indignant when I suggest it's a form of graffiti.  I see it as imposing on the public landscape, just as I see most graffiti does.  However this photo is not yarn bombing.  It has been done at the invitation of the shop owner and is only outside the shop, not randomly scattered through the street.  I rather like the bike or tricycle as it really is. 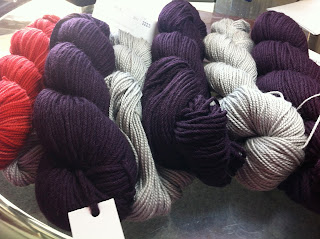 It brightened my day yesterday when she sent these photos as I had had two days of a nasty tummy bug I would not wish even on an enemy.  It's gone now but I still feel very lethargic and washed out.  Despite eating nothing for 48 hours, all I had for breakfast was four large strawberries and I was full.

Something  else to brighten my day arrived just now from Renae at suzyhausfrau.

The in your face bright yarn at the end is merino sock yarn, called Chinese Red.  I am in desperate need of more sock yarn.  Not!

Edited to add:  just after posting this I decided to wind the first two balls for Array cowl.  I have spent a meditative time and have wound all the wool for the cowl and also the sock wool.  Now it's all ready and waiting.
Posted by Jan at 2:47 pm

I am sorry to hear you haven't been well, I hope the nice wool winding has made all the wellness come back. Array is gorgeous, so pretty!! The colours you choose are always beautiful too.
Oh no, it must be a worry for you with your sons' lives in upset and turmoil.
I am not a fan of yarn bombing either, and I can't work out why anyone would want to spend all that time knitting and not making anything to wear!!
Hope you feel great tomorrow.

So sorry to hear about the worries you have for your sons. It is so hard to watch our loved ones suffer. I'll add you to my prayer list. Not a fan of the yarn bomb thing, either. It looks like litter to me. Who would ever be attracted to knitting when confronted with that?

I do hope that your son's operation goes well. My hubby suffers from a popped disc from time to time and can hardly move at all until it gets put back in place so I can just imagine how much pain your son must be in. I hope they all work things out, and I hope the knitting helps you destress a bit. Your yarns look stunning and I love the colors that you bought. Maybe you need a little getaway holiday for yourself.

Hi Jan, I am so sorry to read your family news and hope that things have improved somewhat since you wrote that post.

The outside of that shop looks great and made me smile too,