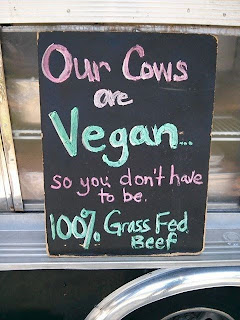 I rather liked this sign.  No offence meant to vegans but yes, cows eat a vegan style diet.

I'm not a vegetarian but certainly don't have meat every day.  I quite enjoy many vegetarian dishes and in many cases, using legumes, lentils etc makes for tasty winter dishes.

Yesterday I had an order  from the Butcherman.  This firm delivers to individuals as well as to restaurants and I've been using them  for over ten years now.  I first used them when I ran the small canteen.  The meat is superb quality and very well packed in tightly sealed vacuum packs which keep well in the fridge.  They are dearer than the supermarket but not by a great amount.  They have some very expensive stuff but I just buy the usual range of chicken and meat and I try to stick to those which come in small packets so I can use them easily.

It's well butchered, no scrappy bits of chicken passing themselves off as tenderloins and no little bits of bone on chops etc just waiting for the unsuspecting eater.  Good  service from them. 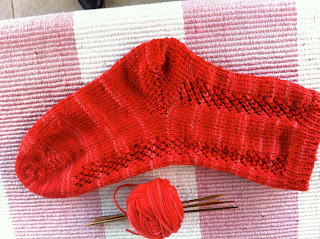 More good service and a total surprise to me came yesterday from the people at Shibui Knits.  I commented on a thread in a group I belong  to on Ravelry that I had found two knots in the Chinese Red sock yarn when I was making  the sock shown at the  right.  It was more or less a comment in passing as I'd just finished the first sock, although I did make the observation that the big balls of yarn from  Bendigo don't have knots in them.  I glanced at the thread an hour later.  The next post was from Shibui Knits posting as a guest in the group and saying that knots were unacceptable.  Could I please email them?  A lovely person named Kristin is looking into the yarn and will follow through at the mill.  If I gave her my name and address, she would send a replacement.  That was quick, and absolutely totally unexpected.  Thank you very much.  More good service.

As you can see, the first  sock is done.  I'm a good halfway down the leg of the second sock.  I think it has gone quickly as I make myself finish the four row pattern before putting the knitting down.

News on eldest son's back problems.  The disc is obviously unstable and will need one of two operations.  However, some blurring was showing on the scans which apparently is an infection picked up in the first operation.  He is now taking some horribly strong antibiotics twice a day and the situation will be reassessed in three weeks.  He could not have another operation if the infection were still there.  He may need more than the three weeks as such infections are notoriously hard to shift.  He's taking yoghurt but also probiotics in the middle of the day to help his stomach deal with the antibiotic which is about eight times as strong as any normal dose.  While the infection hasn't caused his latest problem with the disc, it hasn't helped the whole thing.  His immunity is compromised, he tires more easily than if there were no infection there.  He and DIL are discouraged but try to take things a day at a time.  What helped last week can cause more pain this week and so on.  Very frustrating.
Posted by Jan at 4:43 pm

While I am sad at your son's back issues, I am glad they are treating the infection. I hope everything goes really smoothly. That is excellent service from the wool company and I love the red sock. That's a really good idea with the pattern. I do that with striping wool!! Nice to have a good source of meat. I'm a bit like you, I'd be a vegetarian except it's easier to eat some meat than worry about getting all the proper vitamins and minerals and things in meat.

I had an infection when my gall bladder played up and they do tire you out and make you feel awful. I hope that your son feels better soon and can have the operation. Your butcher sounds great, wish I had a delivery butcher sometimes so that I didnt have to cut the horrible bits off the chicken fillets all the time!

Oh dear, not good news for your son and DIL. The sign about the cows made me smile. Glad to hear that good service can still be found in some places!