Something new every day 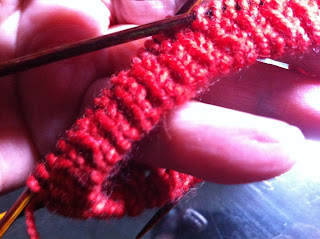 I've admired knitting by others when they have been daring and different.  I've continued on my way doing what I have always done.

However, the Shibui sock yarn in Chinese Red from Renae at Suzy hausfrau in Canberra has inspired me to branch out.  I used this link to a for a tubular cast on which Renae had given on her Facebook page a few weeks ago.  The link has video and written instructions.  I used the written instructions and it's really perfectly simple.  Why I didn't try this a long time ago is beyond me.  I love the result, stretchy and perfect for socks.  The only comment I would make is that it would be good to have a strong colour contrast between waste yarn provisional cast on and the actual sock yarn. Stitches are picked up from three rows down and I found the stitch sometimes hard to see, even using my daylight lamp.  The result is a very neat looking start to the socks.  So easy and I think I have found my new favourite cast on for socks at least.  I also think it would be good for bottom-up jumpers and cardigans.

While I've been branching out and trying new things, I have also had a seniors moment or something similar.  I had done the ribbing on this sock, found myself a lacy insertion pattern and set off down the leg.  I suddenly realised the ball of wool looked small for a pair of socks.  Checked the ball band and yes, I had bought only 50 gm.  I ordered another from Renae and had an email confirming the package had been posted just on half an hour after my order.  Nice work, Renae, thank you. 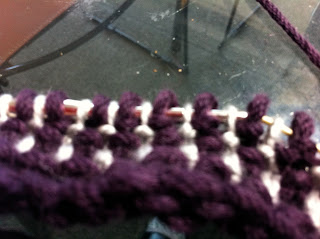 I have put  the Array cowl mentioned below in the naughty corner for a  while.  That's done in the Shibui merino/alpaca and merino/silk.  I checked with DIL that son would wear the deep purple, I'm pushing things a bit here, I know.  320 stitches on 5 mm needles with the 10 ply purple.  The pattern itself is easy as only one colour is used at any one row with a slip stitch pattern. However, each row took ages and ages.  the cowl is supposedly ten inches deep.  I had done about one inch when I realised I would be bored stiff long before I reached the ten inches.  It was very, very slow.  Not only was it slow but I wondered if son would wear it looped twice around his neck, and decided he wouldn't. The 5 mm needles were producing a very stiff fabric with no drape for me, even though I knit loosely.  So I frogged it and cast on with just over half the stitches originally specified and used  5.5 mm needles.  Much better and easier to knit.  Then I noticed a mistake, so out that came.  I'll get back to it later. 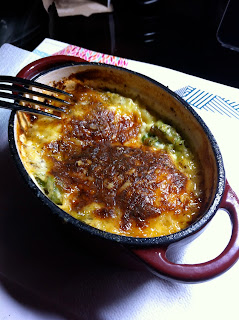 One more picture for today.  Baked eggs.  I like eggs but don't eat them often but these make a good Sunday night meal in winter.  I used a very small cast iron and enamel pot which has a lid, although that wasn't needed.  I have two of these, bought originally for pâté.  Greased very well.  I put two organic eggs in it, chopped some spring onion very finely and added pepper and salt.  I had about a tablespoon of cream in the container so I added a bit of milk and mixed it all together and put that with the eggs.  Some  freshly grated parmesan went on top.  Into a moderate oven till done to your liking for eggs.  My stomach rebels at runny yolks, so eggs are cooked till yolks are firm for me.  Warming and different.  I had a piece of toast and some fruit to follow.

You know I thought there wasnt too many new things to learn in knitting but since blogging and reading blogs I now know there are quite a lot of things I havent done yet. Your tubular cast on looks great. I am sure you will find the right pattern for the cowl and it is better to stop than continue on when your bored!

I learned that cast on for my Aislinn cardi and isn't it great?? But yes, you must have a contrasting colour!! You must be relieved that you stopped the purple cowl. The new knitting sounds much better. The red is very beautiful. I like a red red!!
The eggs sound yummy, I don't mind my yolks runny. I saw the Little Paris Kitchen lady make something like this, I want to try it. I can only eat eggs when I feel like it, otherwise the very though makes me feel icky.