happy birthday to me!

Yesterday was my birthday.  A big one, too big.  Surely there must have been some mistake or I didn't have enough fingers to count on properly or... No, no mistake.  Still it was a good one and there's another instalment of the celebrations on Saturday.

My friend is back from overseas and he took me for a long leisurely lunch.  Nothing fancy but very pleasant.  It was pleasant sitting inside and looking at the sun outside.  What wasn't pleasant was our eventual emergence into the icy blast of a gale which had been blowing all day. 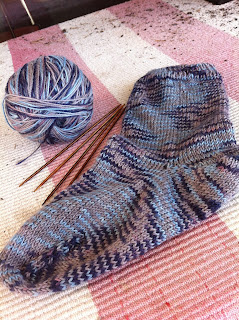 I was given the flowers.  It's not a good photo, they are actually a deeper colour than shows here, but they are cheery.  I had been planning on buying myself some but as it's something I don't often do at all, I had quite forgotten when I was out.

I have been doing some knitting.  I have finished one sock from  the Wool That Pools.  By clever attention to the placement of the heel, I have managed to split the pooling and have also managed to turn most of it to the back of the leg.  I am just about finished the ribbing on the second sock.  I think I'll give these to my sister whose birthday is next month.

The picture shows the first sock, straight off the needles. No attempt at blocking whatsoever.  There is a very large dark splodge on the back of the sock which takes up almost all the leg. 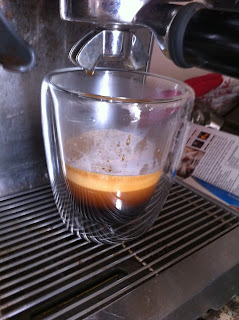 When I returned from lunch about 4:00 pm, there was a message from a son telling me to "frock up" as we were having dinner out.  Apparently I had said that I was planning on leftovers last night and that offended all three sons as it was my birthday.  Not actually leftovers but a deliberately planned and served second serve of a recipe.

So one son rang around and rang his brothers and we went to a classy Indian place in Strathfield a couple of stops up the rain line.  Youngest son even made it down from the Central Coast.  We enjoyed it, I think the last time I had been there was a couple of days before eldest son's wedding in 1997.  DIL and I had been out picking up some last minute things and needed some food.

We all enjoyed the food and the attentive but unobtrusive service.  I enjoyed not paying for it!    Youngest son gave me some double-walled latté glasses.  I used one this morning and found it pleasant to hold and to drink from. 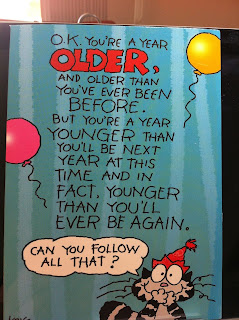 Saturday evening sees a larger gathering of family and friends at the pizzeria which was 100 metres down the road from my former home.   We are well known there and the food is always great.  There will be twenty-one adults and five children so Mario has suggested his banquet menu.  I think he uses this so people get a taste of his food and come back.  We are all regularly there but it seemed like a good deal.  Unlimited pizzas delivered  to the two tables at intervals so  they are eaten hot, dessert and coffee for those who want it.  Cost of $24/adult and less for children.


I leave you with two cards.  The first accompanied the gift from friend of a new fountain pen, inks of various colours and two Moleskine notebooks.  I am three months older than he is so will now need to start searching for a card for him.  When opened, the inside says, "Well, at least your mind is still good." 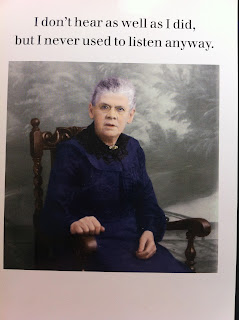 This second was chosen by the DIL who has similar tastes to me.  I wear hearing aids, have done for about ten years now, although probably should have worn them for quite a while before that. This is a none too subtle dig at me and the three boys had all seen it as they bought it at Strathfield.  They were all very amused with it.  I do remember using that excuse from time to time for not hearing something before I got the hearing aids.

There was a candle and a cross she bought from a Benedictine Abbey on the South Coast here which were both lovely.  This morning a gift voucher from Amazon arrived in my inbox, also from them.  A three figure number on it, well over $100.  Amazon vouchers have no time limit on them so I can have a great time shopping with it.

So dinner tonight has only to be heated.  Lovely.
Posted by Jan at 5:25 pm

What a nice birthday you had. Glad it was a happy, memorable time for you.

What a great day it was!

Happy happy birthday. Sounds like you had a great day (now I want Indian too!). How lovely to have a surprise dinner and a bit of surprise amazon shopping. So many choices!

I'm late but nonetheless I wish you many happy returns of the day! Love that "cat" card! Twisted logic indeed!