It's a lovely winter, August afternoon here today.  Brilliant blue sky, mild in a sheltered position but the wind has an edge to it.  I sat on my balcony in the sun for a while and worked on a new sock. It's some yarn I bought several years ago from the Granny Square in King St, Newtown.  The shop is an offshoot of Morris and Sons, formerly Tapestry Craft.  The yarn is marketed as sock yarn and comes in a 130 gm skein so there is plenty for a cosy length in the leg.  I bought a couple of skeins when I bought this lot. 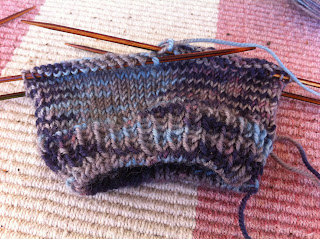 I'm not feeling the love for this yarn.  I wound it when I bought it and quite liked the soft blues and greys.  I tried knitting it twice and it pooled badly.  It was put away.  I took it out again the other day.  I tried two separate, quite different patterns.  They really did not work with the variegated yarn.  The patterns just didn't show up.  I ripped them out twice.  I am now doing a perfectly plain sock which I intend to give to my sister.  She loved a pair I gave her some years ago.  She's not a knitter so may not know the yarn isn't supposed to pool as it is.  At least, I hope it wasn't deliberately dyed to pool.  I've now done about another three centimetres than shows here and yes, it's definitely pooling.  I'm tired of it and will press on.  A bit like an athlete pushing through the pain barrier, I guess.  If I can keep going long enough, I may no longer notice the pooling.

I went to the Southern Highlands again yesterday.  It was beautiful.  Very crisp and quite chilly, but clear.  I took a cottage pie as my contribution to lunch.  I went to the local shopping centre up the road. The area is a centre of a large Italian group and there are lots of shops which cater for them.  I went into what looked like an old style butcher's shop and asked for skirt steak which my mum always used for her famous pies.  He not only knew exactly what I wanted but could cut me some straight from the carcase.  I cooked it slowly with mushrooms, red wine, crushed tomatoes and onions and garlic and leeks.  On Friday I cooked a pie of potato and mashed it for the topping.  It was very well received indeed.

As it was chilly, I wore my new Shibui socks and the bright red new shoes to match.  Very happy feet  which were warm all day, even outside.

There does not seem to be much change in my son's condition.  He can't really see that two weeks of the super strong antibiotics have made a difference.  However, as the surgeon has now given him scripts for these to last the next three months, it will obviously not be a rapid recovery.  Even at that, it may not be the answer.  He's having more intense blood tests to see what can be identified.  All that has change is that the move to France has been indefinitely postponed and more than likely cancelled.  For that I am deeply grateful and relieved.  I did not think it was the  right thing for them to be doing, although I would have been happy for them to travel abroad for 12-18 months.  However, I found the thought of his being away in the condition he's in with no real in depth knowledge of French to be very disturbing. 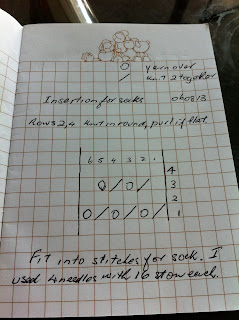 Now to something different.  I charted the insertion pattern I put into the Shibui socks.  As you can see, it's only six stitches to do.  Just slot in where you want it in socks .  I used four needles with 16 stitches on each and the insertion in the middle of each needle.  That distributed the lace evenly around the leg.  Remember if you are knitting in the round that rows 2,4 with be knit.  If you are knitting flat, rows 2,4 will be purl.  It's an extremely easy pattern but it looks good when done.
Posted by Jan at 2:52 pm

Warm red socks and shoes, sound lovely. How nice to find a butcher that knows about skirt steak!! Oh your cooking sounds delicious. I am commenting backwards, and so I love the pooling!! I suspect that non-knitters would think we worry about nothing!!! I'm sorry to read your son's condition is not responding quickly. I would worry about him going away for so long too.
Nice chart. I prefer a chart to the written word in knitting and I love that most lacy panels don't have the purl row, you just knit a round!!!

I am so sorry to read that your son's condition has not changed at all.

We are, indeed, having gorgeous weather -- way too good for winter but I'm not complaining as I really don't like the cold! This afternoon, WM and I had lunch outside (fortunately the heavy smoke haze from the burn off had cleared by then), then sat there and talked for a couple of hours. I only put a jumper on about 8pm!