I have sometimes remarked, as has my sister, that I seem to be turning into my mother at times.  I use some of her phrases  and have recently found myself turning to some of her recipes.  Nothing wrong with that, actually.  She was a good, innovative cook who used garlic and other strange vegetables well before her peers.  I recently made a chocolate slice which still goes by the name of fudge in the family.  Not at all the gooey concoction of that name now.

The smell of it cooking brought back to mind, the times I would walk around the side path to the back door as I returned from  school.  I could smell she'd been cooking fudge from quite a distance  away.

I grew up in what was then a semi-rural suburb of Sydney.  Lots of open space, unpaved roads, no footpaths.  There were several market gardens in my street and a poultry farm which sold us freshly killed chooks for extra special occasions.  We took our billy can down every morning for rich creamy milk for breakfast and cooking.  Eggs were sent up by the farmer regularly.  The rabbitoh man drove a horse and cart around regularly selling rabbits for meals.  The ice cream man came every Sunday lunch time and there would be a rush to buy wavers, two flat, crispy pieces of icecream  cone material.  These sandwiched a wedge of icecream which was wrapped.  Sometimes we would get a block of icecream.  The freezer in our fridge was tiny, so this had to be bought as needed.  It would be served with hot, freshly made caramel sauce.  The sauce was my responsibility from about eight years of age.

Dad  was a teacher at the local  school and I walked there and back with him every day.  About 15 minutes it took and we did not have a car till I was 12.  Our house was one of several in the street which had been left as a shell by a builder when he went broke and just disappeared.  No floors, internal wall, ceilings, fitting etc.  Dad built the inside of the house every afternoon after school.  I have some yarn ordered which is called 1950 kitchen cupboards.  I'll post a photo when it arrives, but yes, our cupboards were painted in very similar colours to this yarn. 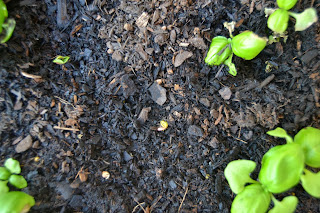 We had what would now be an enormous block of land, and dad lovingly planted a garden.  He had not just green thumbs but a whole host of green fingers as well.   Lots of flowers as well as fruit trees and vegetables.  Swane Bros nurseries were at the bottom of our street and when they moved, Mrs Swane let him take as many of the prize-winning  roses from the garden as he  wished.  Just beautiful, and much better than having them ripped out by a developer.  Manure for these was collected in our old pram from the paddocks around the poultry farm.

On our way home from school we would call in at Cuthbert's nursery where he would buy seedlings.  They are still there but sell a different range now.  He taught  Betty Cuthbert  who won several gold medals for sprinting at  the Olympics.  Mrs Cuthbert would make a wrap from newspaper and while Dad may have asked for a dozen lettuce seedlings, she would get them on her trowel and wrap them up.  Many more than he asked or paid for.

So what has prompted this fit of nostalgia?   I think it's spring.  My birthday herbs are thriving.  The basil I planted last Thursday, four days ago, appears to be settling in, even though the seedlings were tiny, and the radish seeds I planted at the  same time are sprouting.  All over the box of potting mix, tiny leaves are pushing through the light covering and reaching up to the light.

They are a bit difficult to see but they are definitely there.

Dad had a beautiful garden and while the flowers were beautiful, so too were the vegetables.  There were several passionfruit vines and we picked ripe passionfruit every afternoon.  Many of them never made it inside.  He had a bed devoted to strawberries about five metres by five metres.  This was great till we started to share a tiny bitser stray with the neighbours.  She liked strawberries even as a puppy  and would nose around in the bed.  She only ever took the ripe ones, but we had to be quick to get them before Annabelle did.  She also liked young beans and would eat them straight from the plant until dad planted climbing beans and we then took the high up beans.

Row after row of radishes were planted each week and I ate them straight from the plot after a quick rinse under the laundry tap.  There were bananas down the side path  and several peach trees.  Peaches picked from the tree on a summer's day and eaten warm from the sun are amazingly good.  He grew all our potatoes and most of the other vegetables like tomatoes, broccoli etc.  I picked mulberries from an enormous tree in the corner of the back yard.  The downside was I  always had purple fingers in mulberry season and I was the one who had to snip off the stems before mum cooked them.

Later in life Dad studied part time at Ryde school of horticulture and  topped the year every year.  One of my saddest memories of  him was at the beginning of the Alzheimers which eventually took him.  We sat on the back verandah of the mountain home he had built for retirement where he had made another beautiful garden from rough scrubby bush.  He complained to me that he knew the name of a shrub we could see.  He knew he knew it and had planted the shrub.  However the  name  was tantalisingly close in his brain, but he just couldn't put a name to it.  This bothered him enormously as he did not know what was wrong.

I had a great garden when the boys were small but let things go.  I think the spring feeling has me looking forward to using the herbs and certainly has me anticipating the radishes, fresh with a sprinkle of salt.

So some reminiscences prompted by my radishes on a sunny, Sunday afternoon.  I'll finish with a picture of my spring shoes.  Bright red and very cheerful.

I love your Spring shoes, they're fabulous and must make you feel cheery every time you put them on!!
I think smells bring back memories far better than any sense. The ice cream description makes my mouth water. I can definitely see your garden growing.

My garden memories are of dad weeding out the bindiis from the from yard by hand using an old bone handled knife and using the hose to guide him. After completing a length of the hose, he'd move it a couple of inches and start all over again. My grandparents had two house blocks with a tiny one bedroom end house. They had honeysuckle growing all over the separate fibro laundry and a "bush house" down the back. The old outside toilet was called the "little house"! Across the yard from the bush house was an enormous eucalypt which was home to many noisy cicadas every summer. We don't have cicadas here -- apparently the bird population has depleted them all!

Such a lovely post Jan. Memories from a happy childhood can't be underestimated. The image of collecting manure in an old pram made me smile.