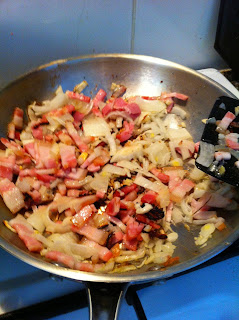 Cindy who blogs over here, has been testing recipes weekly.  Some of them are delicious and I have used them, but the one for pasties which she tried a few days ago did not really appeal to me.  She also said that the combination of both pasta and pastry was a bit much.

When I was growing up, my mum  would often make a pie.  Her true meat pies are legendary in the family and it seems as if my youngest son has inherited her mantle for making them.  Mine are given 8/10 and hers were classed by my sons as 12/10.  She made her own delicious pastry.  The meat was cooked with mushrooms and wine by the side of the wood stove for hours.

However, when I was younger, there was more  emphasis placed on economy and filling us up than on beef and burgundy pies.  She was a good cook and we ate good healthy food but occasionally she would make a pie with Tom Piper steak and vegetables which came in a tin.  I remember they smelt great but I didn't much like meat then and like the tinned stuff even less. 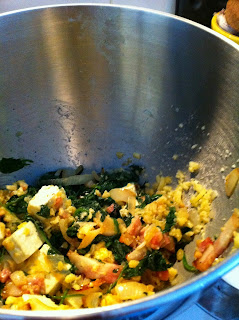 One rule which I picked up was that if there was pastry, then there was no mash.  I can remember early times of marriage when my husband was horrified there was no potato to eat with his pie.

Now Cindy's recipe which she posted had cooked macaroni or similar in a cheesey sauce, all encased in pastry.  A bit too heavy on the carbs for my liking.  She thought so too. A bit like potatos and pastry on the same plate.

I was thinking through the week about what could be done about it.  I remembered the Greek pie spanakopita which uses filo pastry.  I had baby spinach which needed to be used.  I had Tasmanian fetta cheese, I had a couple of rashers of bacon.  I had puff pastry, I don't buy filo for just myself as it dries out before I can use much of the packet.  I did have puff pastry. 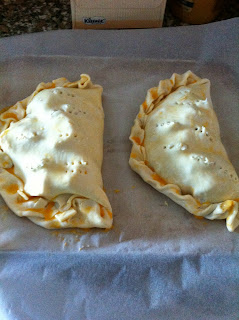 I cooked the finely chopped bacon and some onion, along with two big cloves of garlic.  I added the baby spinach and put a lid over the pan till it was wilted down.  I usually make the spanokopita with raw spinach and sometimes it cooks down so much there is a  big space under the pastry.

Into a big bowl went this, along with quite a bit of chopped fetta and some grated tasty cheese.  Season to taste.  Feta can vary in its saltiness, so  taste  before adding any extra salt.  I didn't add beaten eggs to the mix or use ricotta as well as the recipe above suggests.  If I make spanakopita, I usually make it in a pyrex bowl so use the eggs then. 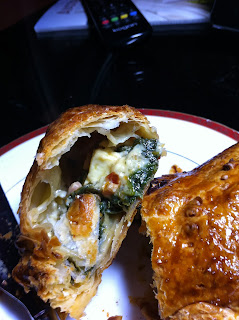 I thawed some puff pastry and cut two circles.  I could perhaps have stretched it to three pasties as I had some of the mix leftover.  Put the mix down one half of the pastry, moisten edges and fold over and crimp together.  Place on baking sheet on some baking paper.  Use a pastry brush to brush outside with beaten egg. Mine were cooked for 25 minutes at 190 degrees as my oven runs very hot and fierce.  It made a good meal with some salad, although I think I could no longer call it spanakopita.  Things had changed somewhat.  I think they would be good cold on a picnic but smaller.

Spring has sprung here and my birthday herbs are thriving.  The ginger mint is unusual.  At first it just tasted minty, but then there was a definite after taste of ginger.  I filled a foam box with potting mix two days ago and have eight basil seedlings planted, tiny at the moment.  My mind sees pesto.

Also planted some radish seeds, just a few from a packet as an experiment.  If they work, I will sow a few more at a a time.  I haven't had the cockatoos on my balcony since I moved the table near the door away from the edge of the balcony.  So I will be watching all this with interest and anticipation. 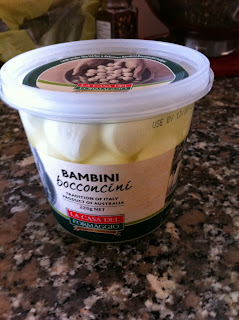 I was cutting up a few salad bits and pieces to have with a sandwich for lunch today.  Have you seen these delightful bambini mozzarella balls?  I like the cheese but usually have the baby bocconcini or even the larger.  I bought these a few weeks ago and they definitely are cute little bambini.  The taste is mild and sweet and went well with my lunch.  I think they were about $4.50 or perhaps $ 4.99 for the tub. 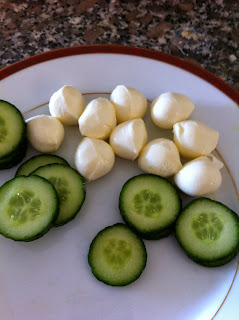 They would go well almost as a garnish on a plate of savouries.  The cucumber here is a long skinny Lebanese cucumber, so you can compare the bocconcini to the cucumber slice.  They are about as big as my little fingernail but basically sherical.  I bought them at Coles.
Posted by Jan at 3:07 pm

Yes, I think we are all agreed it was just too much with the added pastry. I love your Greek pastries (because I can't spell spanikopita) They look delicious and I think they would taste even better the next day. I love filo pastry, I like to buy it fresh and then I freeze it. I always cover it with a damp teatowel. They are very cute little baby cheeses.

Renae "Suzy Hausfrau" was one of the guest speakers at Guild Camp. She spoke today on " turning knitting into a business". During the talk she mentioned that customer service was her top priority and I immediately thought of you and your pleasure in getting great service from her!

I live almost around the corner from BMW Woodcliff Lake, so I'd be a perfect candidate for a transplant!