so, where have I been? 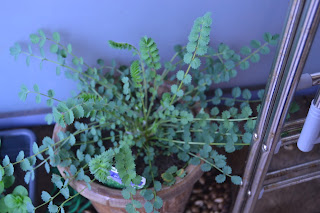 An extended absence on my part, not really intended.  It just happened.

I spent some days in the southern highlands.  Last year, it was -6° C one afternoon and overnight.  This year, one day was around 30° C.  Too warm for this time of year, really.  The Highlands were beautiful.  Much of the blossom was out and trees were covered in puffy little balls of flowers of pink or white.  I didn't take my camera, so have no decent photos of it. 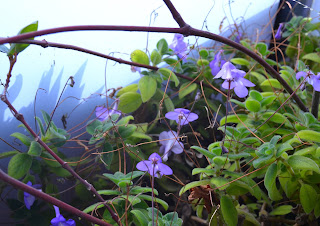 I went with my friend and we stayed at a different motel to the usual.  We are not looking for luxury as we rarely spend any time in the motel during the days.  Clean comfortable beds and bathrooms so we sleep well at night.  The usual abode was being renovated.  The rooms were done a couple of years ago, so I hope they did the bathrooms this time round.  Always clean, but extremely dated and tiny and cramped.

We went over the road to a Best Western motel.  Much more expensive but it seems to have spoilt us for our usual.  Lots of facilities which we suddenly found we needed.  My room had a big bath as well as a shower.  Bigger actually than the bath at home.  Free wifi, good beds dining room for breakfast.  We used to buy breakfast at a cafe as the breakfast at other place was nothing wonderful.  This was fine, cereals with lots of fruit etc and toast and good coffee or breakfast cooked to order. This time we sat in a bay window with a fountain just outside and watched the birds coming to the feeder.  They had the same order of appearance each morning.  Pretty gardens and all mod cons.

The only down side was the heating.  It had been cold and then there was a very warm stretch.  The place was centrally heated so I found I just had a sheet over me most of the night.

My friend is still having tests done to determine his chest problems which were triggered by dust etc at Royal Easter Show.  Just like last year, but this year they haven't cleared. 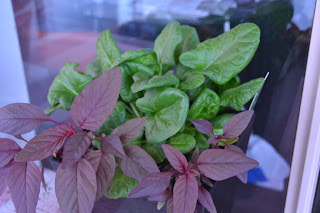 Son with the bad back has been told he may never be really truly recovered.  Not good news.  They sold their house where they were living along  with other real estate.  As they haven't moved to France and my guess is they won't, they had to move in with DIL's mum.  He could not help at all with packing and moving and I think the whole process has been quite emotional for them.  He had a birthday.  I was knitting a cowl for him, but it's still in the naughty corner after being ripped back three times.  At least it is now spring, not autumn as it would be in France.

He's now taken antibiotics for the bone infection in his back for six weeks.  Huge tablets.  DIL calls them horse tablets.  The first medical estimate is he will need them for six months and most say probably longer.  Then he has to work out what treatment he will accept for the unstable disk which was the subject of the first operation a year ago. 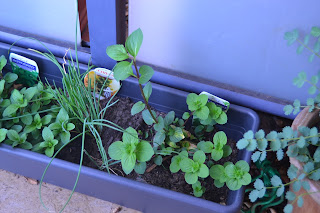 I was given some herbs and a planter for my birthday by friends.  The herbs have  taken off in the warmer weather.  I already had a  thriving lavender, but now have a variety.  The baby spinach is bursting out of the pot.  I have  tried some ginger mint which is pleasant, not strong.  The spearmint is coming on well.  The feathery plant is salad burnet which has a taste reminiscent of celery.  Two sorts of chives are springing up and I have used some in some  chicken mince for dinner tonight, along with  garlic and chilli.

I think I'll make some meatballs with it or perhaps some larger rissoles.

I'm so sorry to hear the prognosis for your son's back, not good at all. It was a shame they had sold their home; it seems only a few months since you all moved there! Your herb garden is doing very well. I don't like this return to wintry weather -- bring back the early start to spring!

Your holiday sounds nice and a tiny bit luxurious!! The weather has been warm on The mainland, and here too, though we had snow this week, on the Coast.
I am sorry to read about your son's back problems being ongoing. I hope that the doctors can work out something to make him feel better at least.
Oh you've reminded me I must go and chose some herbs to come to my place and probably not live, I want mint and parsley and maybe chives!! Yours look very healthy.

So sorry to hear about your Son's bone infection - not good at all! Hope they can come up with a decent treatment for him.

Your trip sounds gorgeous - love the southern highlands, especially this time of year when the trees are looking beautiful.

Your herbs are looking great!