a most unpleasant week that was

I haven't posted for a week.  It seems very trite to berate myself for having done only about twenty rows of the second Madeleine Tosh ruby sock when many people have lost everything in the bushfires around Sydney.  These fires are still burning and will burn in mountain valleys for weeks unless we get substantial rain, which does not appear likely.  Fire fronts cover hundreds of kilometres and thousands and thousands of hectares have been burnt. 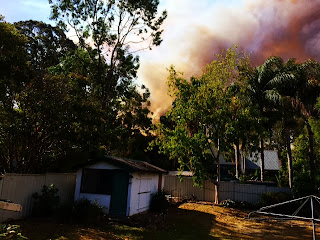 My son and his wife are now living with her mother in the foothills of the Blue Mountains.  Above them on the lower mountains around two hundred homes were obliterated.  They actually live in what in normal times would be called a suburban area.

With the unseasonable heat, the extra dry conditions and the the appalling winds we have had, there is no such thing as safe suburbia.  Look at the 40 destroyed cars with another 37 badly damaged, in the car park of the Olympic Aquatic Centre.  That's a car park I have parked in dozens of times, about ten minutes from here.

This picture was taken from her backyard a few days ago and there is another fire in the area tonight.  That is far too close for comfort.  They have spent today installing a more elaborate sprinkler system in preparation for another three days of heat and high winds before a possible cooler change and hopefully some rain on Wednesday.  There has been almost no rain here since June.

I have friends on both roads leading over the mountains.  They have lived there for years and have experienced  fire before but this seems different to them.  The mountains are like a home to me.  I feel very much at home there and would love to live there.  Mum and Dad grew up in Lithgow.  Dad was a history buff who knew many little bits of mountain history and could go to many places the tourists  would not see.  I think I have inherited his love of the place.  Even Mum who had a deep fear of snakes and spiders would tell of picnics in almost inaccessible places around the mountains at the back of Lithgow.   As children, we were taken to many of these places and my sons have inherited my love of them.  The ZigZag railway, due to reopen in a few days has been wiped out with rolling stock and parts for renovations destroyed.  My grandchildren walked those tracks only a few weeks go and ere amazed at the engineering.

Dad grew up at Oakey Park at Lithgow.  Much of that was burnt a few days ago.  What annoyed me then was the poor reporting of this.  I think the Sydney Morning Herald has dumped most of its subeditors over the last few months and spelling and grammar standards have fallen badly.  Oakey Park has an E in it.  Today the Herald had something like,"there was over a hundred fires burning."  Something like this is in almost every edition. 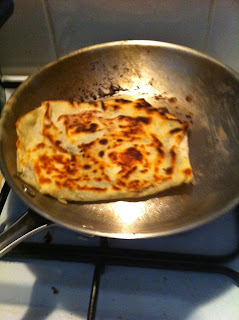 So not much knitting and lots of heart ache even though I don't think I know anyone who has actually lost anything yet.

I found a  recipe for Turkish gozleme on a blog.  I've seen it several times lated and can't remember just where it was.  I'm sure a search would turn up something.  I like this dish and living in Sydney's inner west with a cosmopolitan population there is a variety of food available.  Gozleme turns up at markets and garmers' markets around here.  Usually with two Turkish women slaving away making and cooking and one old man keeping an eye on them

It was simple.to make.  Mix one cup of Greek yoghurt, a pinch of salt and 250 gm flour together.  I put on a disposable rubber glove and did it by hand.  It took a few minutes to all come together.  Then I kneaded it a bit and covered till I was ready to use it.  I often forget yoghurt in the fridge so I bought the smallest Greek yoghurt I could find, 200 gm.  It needed a couple of tablespoons of milk to make it up to a cup measure.

Divide into eight portions and roll out as thinly as possible on a floured surface.  This was quite easy as the dough was pliable. 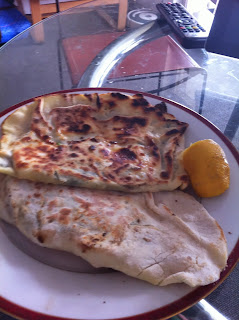 Place in a pan with a bit of oil or spray.  On half of it put baby spinach or silverbeet and some cheese.  I used feta but I guess something soft would also work.  Fold the other half of the dough over and press down all round.  Cook till one side is brown and the flip to do other side.

The darker one here has spinach and feta in it, the lighter spinach and some shaved ham.  I think a mince mix could be nice too.  Serve with a wedge of lemon.  I did two and now have six small balls of dough frozen waiting for another time.  Two this size was almost too much.

I do so hope your friends and your son are ok, it all looks so terrifying on the news from down here.
The gozleme looks lovely, must give them a try!

The fires are frightening, the force of Nature is awesome, and I mean that in the old way. I hope everyone is safe. Yes, I saw the car park fire, how scary that it is one you use. I have seen the gozleme on cooking shows, I might give them a go now, they look delicious!!!
Oh, grammar and spelling?? A thing of the past.

Thank God for the rain we've had over the last nine days although I have no idea whether the fires have been finally extinguished!

Gozleme -- yum! Thanks for sharing the recipe!