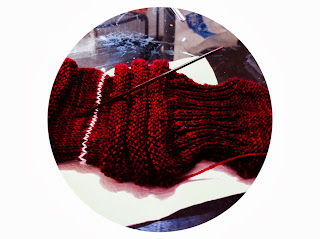 I've decided that the afterthought heel is not really an after thought at all.  It requires planning, marking, undoing yarn, picking up stitches, knitting heel.  Not much in the way of afterthought there.

This is the Mojo sock (Rav link) which I have been doing in Madeleine Tosh sock yarn, colour Tart. 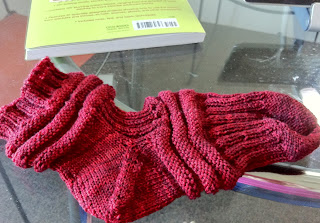 The white line is where the afterthought heel will go.  After I finished the sock, I came back, picked up stitches above and below the white yarn and knitted the heel.

It made a very odd looking sock indeed.  The rows of bumpers, five rows plain, five purl, repeated all several times totally changed the shape of the sock with the different tension introduced.

I thought I had never seen such an odd looking sock till I remembered the one I did years ago when under a fair bit of stress.  I turned two heels on the one foot.  That was odd indeed. 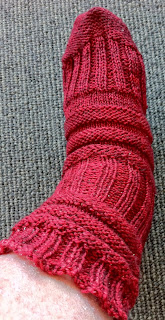 However, the sock is very comfortable and fits well.  Now for the second sock which is a fraternal twin.  Same yarn but different configuration of stitches.  This one is turned inside out after the  toe is complete.  The second sock is the normal stocking stitch.

Today has been pleasantly cool, unlike yesterday when the temperature dropped drastically here in the middle of the day and it was quite cold.  That was in itself a contrast to the previous days of fire bans and temperatures over 30°C with enormous gales.  To have no wind has been very restful today and I sat  on my balcony in the sun and knitted this sock this morning.  I had lunch out there too, but then the sun went and I became chilly, so came inside.

The chicken with maple syrup, mustard and rice wine vinegar which is detailed in the post below did me several meals.  It kept well and I had some both hot and cold.  I'll repeat this recipe, it was good and I enjoyed it.  I've had it with salads and with hot vegetables.  Good whichever way i served it.  Very simple, it could hardly be easier to prepare. 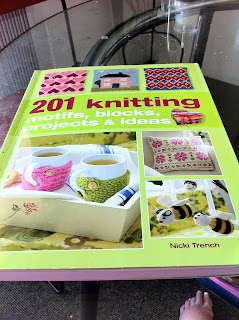 I bought this book as part of the Amazon voucher which was given me by one son and daughter-in-law. Book Depository has it more  cheaply but the voucher covered the  shipping too.  There are hundreds of squares inside.  I thought it might be interesting  when resting between more major projects to do a square at a time.  If done in same weight of yarn, they should(!) be the same size and could make a blanket.  That's the plan, anyhow.  There are many projects of different sizes and complexity as well.  A good resource book for the shelf.

The little mobile of bees which you can see on the bottom right looks like a fun knit to do.  There are cushions and bunting and gifts and more.

The bee mobile is very cute and yes, it sounds like an excellent plan. I have excellent plans, but sometimes they just don't work out.
Oh I love the Mojo pattern but I could never wear them as they would feel different on each foot. I love the colour. Afterthought heels, not my cup of tea either. We have had more rain and wind. My poor camellia.

I always knit socks from the toe up and do a short row heel. It even works with stitch patterns, though I only do them in the leg part - I mostly knit socks for my husband and he doesn't like patterned feet. These are gorgeous though!

The bees caught my eye...naturally.
I love knitting but I often go for a while without doing any. SO many crafts and so little time.

They are stranger than any socks I've seen. The bands make them look really chunky!

As for the knitted blocks, it will depend on the techniques being used as to the resultant size. Stocking stitch is narrower and taller than garter stitch, colour work pulls in the knitting, linen stitch is vey narrow, cables pull the work in... Well, you get my drift!